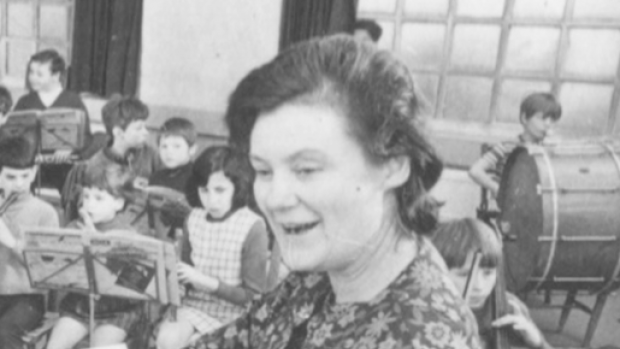 I was incredibly privileged this July to have a two week work experience placement at Sound and Music - working on the British Music Collection - giving me meaningful work in a field I am interested in.

I spent the first three days going through different profiles in the collection that didn’t have biographies and filled them in. This was really exciting for me because I was doing something that actually mattered: building educational resources on both popular composers such as Peter Maxwell Davies and Gustav Holst, and those scarcely known such as Mary Plumstead and Christopher Le Flemming.

One of these lesser known composers was Sue Selwood, who I have a connection to through a family friend. Before she passed away in 2013, she handed us several boxes full of music written by her mother, who had died two years previously. Her mother was primary school and recorder teacher Margo Fagan, born in 1921. Margo’s interest was in children and music, and while working as a PE teacher in North London, she set up the Young Music Makers children’s orchestra. She left the school in 1968 but carried on teaching music to children into her 70s and 80s. The product of the years working with children’s orchestras was her collection of over 30 pieces written for beginners, mostly for an ensemble of recorders, strings and percussion – which were now collecting dust underneath a desk.

My second task at Sound and Music was to get all of that music scanned and uploaded onto the British Music Collection. Through finding whatever I could online about her, I pieced together enough information to create her a profile and write a biography. Hundreds of pieces of paper were then scanned, digitising the scores and parts of over 30 pieces. For the first time ever, the works of this highly obscure musician are now accessible to anyone who wishes to use them.

Margo Fagan’s legacy would not have simply died had she not have been made public. It exists in the hundreds of young musicians she educated and inspired, their work, and the people they inspired. Several members of the Young Music Makers children’s orchestra went on to form the DaCapo Music Foundation, where children from complete beginner level are taught music on Saturdays. Hundreds of musicians, including myself, started their journeys here, all thanks to Margo’s work and inspiration. This is why my role at Sound and Music was so important to me, because I and many other musicians owe our skills and interest in music to Margo. The same applies to many other unrecognised people who have put so much work into teaching and inspiring - there can be no musicians without these people. And so no matter how unglamorous it may seem compared to the world of professional music making, we must never give up on local musical community. The institutions that Margo set up based around local involvement in music create an environment of learning through experience and “doing” as a group rather than individualistic dictation, that is accessible to all. Without it, I would not have the musical interest to be here paying my own tributes.

Recognition of this can be seen in the community as well. As described in this article. A memorial concert was held for Margo six months after her death in which her own music was played. Among the attendees were former students of hers, children from Young Music Maker’s, the orchestra she founded, and children from DaCapo’s orchestra, including myself on the violin when I was eight years old. So despite never having met this woman, I and the other students at this concert were her legacy, playing her music in communities of music making that would not exist without her. That is why I have returned the favour for her through my work to maintain her memory, on behalf of everyone she has positively impacted, and to inspire more to follow suit.

Jack Robinson is a young contemporary composer based in London. He usually writes music for classical ensembles that takes inspiration from composers like Stravinsky, Shostakovich and Debussy. He was one of the two winners of the BBC Inspire Young Composers Competition Junior Category in 2016. He recently completed two weeks of work experience at Sound and Music. Discover more on his British Music Collection profile here.