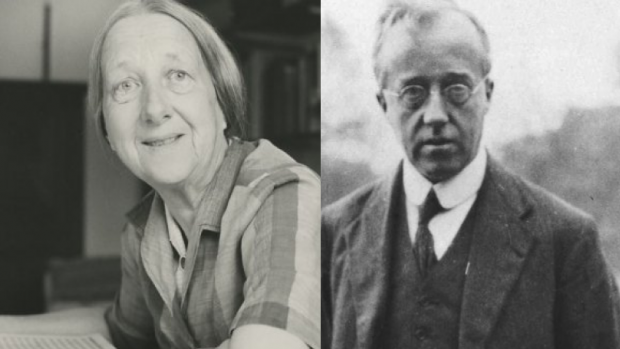 There’s a vast range of composers in the British Music Collection, so in this new feature we’ve picked out a few connected individuals for you to discover. Here we’re focusing on pairs of related composers.

Jem Finer is an artist, composer and musician. A key example of his work is Longplayer, a thousand-year-long musical composition that has been playing since the last moments of 1999.

Discover Jem's profile and listen to his work here.

Ella Finer’s work in sound and performance spans writing, composing and curating with a particular interest in how women’s voices take up space; how bodies acoustically disrupt, challenge or change the order of who is allowed to occupy – command – space.

Discover Ella's profile and listen to her work here.

Errolyn Wallen is a Belize-born British composer. She was the first black woman to have a work performed at The Proms. Wallen's music draws on a wide range of influences, including avant-garde classical music as well as popular songwriting. Her work has been performed in leading concert halls and theatres around the world.

Discover Errolyn's profile and listen to her work here.

Byron Wallen is a Jazz trumpeter whose original scores have been commissioned by the Science Museum; PRS, The BBC, Jerwood Foundation, Southbank Centre, National Theatre, Arts Council, FIFA and Sage Gateshead. Wallen has received the BBC Jazz Innovation award (2003) and has been nominated several times for the MOBO award.

Discover Byron's profile and listen to his work here.

Elizabeth Maconchy studied at the Royal College of Music with Vaughan Williams, chaired the Composers’ Guild of Great Britain, and was President of the Society for the Promotion of New Music. In the post-war era, Maconchy was greatly in demand as a composer amongst the leading professional ensembles, orchestras and soloists of the day. She lived with her husband, the scholar and medical historian William LeFanu.

Discover Elizabeth's profile and listen to her work here.

Nicola LeFanu has written around sixty works, including music for orchestra, chamber groups and voices, as well as six operas. She earned a Doctorate in Music from the University of London in 1988 and holds honorary doctorates from the Universities of Durham and Aberdeen and from the Open University. She is active in many aspects of the musical profession, as composer, teacher and director.

Discover Nicola's profile and listen to her work here.

Best known for his orchestral suite, The Planets, composer and teacher Gustav Holst is one of the most well-known composers in the British Music Collection. He accepted the Howland Memorial Prize from Yale University in 1929 for distinction in the arts and the gold medal of the Royal Philharmonic Society in 1930.

Discover Gustav's profile and listen to his work here.

Imogen Holst's compositional career spread across a broad range of work. In the early 1950s Holst became Benjamin Britten's musical assistant and began helping with the organisation of the annual Aldeburgh Festival. In 1956 she became joint artistic director of the festival, and during the following 20 years helped it to a position of pre-eminence in British musical life. In 1964 she gave up her work as Britten's assistant, to resume her own compositional career and to concentrate on the preservation of her father's musical legacy. She supervised and conducted recordings of her father's pieces; with the aid of the composer Colin Matthews, as well as compiling 'A Thematic Catalogue of Gustav Holst’s Music.'

Discover Imogen's profile and listen to her work here

Colin Matthews studied composition with Arnold Whittall and Nicholas Maw; before becoming assistant to Benjamin Britten in the 1970s, and then working for many years with Imogen Holst. Over four decades his music has ranged from solo piano music through five string quartets and many ensemble and orchestral works. He was Associate Composer with the London Symphony Orchestra between 1992 and 1999, and Composer-in-Association with the Hallé from 2001-10.

Discover Colin's profile and listen to his work here.

David Matthews started composing at the age of sixteen.  He read Classics at the University of Nottingham - which has also made him an Honorary Doctor of Music - and afterwards studied composition privately with Anthony Milner. To support his composing career he has done editorial work, collaborating with Deryck Cooke on the performing version of Mahler's Tenth Symphony, and orchestrations of film music. Matthews is Music Advisor to the English Chamber Orchestra and was Artistic Director of the Deal Festival for 13 years.

Discover David's profile and listen to his work here.