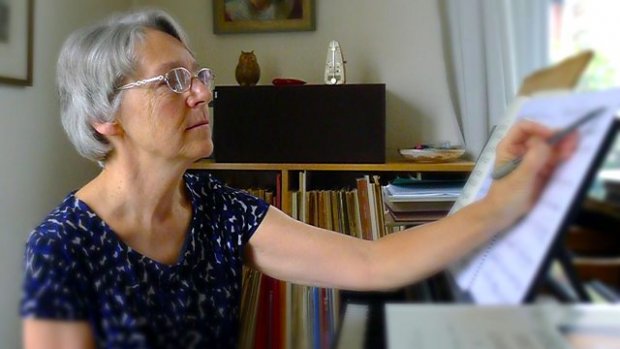 Nicola LeFanu was born in England in 1947, the daughter of Irish parents. Her mother was the composer Elizabeth Maconchy. As well as composing she has enjoyed teaching composition in England, America and Australia. For many years she taught at King's College, University of London, where she had a Chair in Composition. She is married to the composer David Lumsdaine and they have a son, Peter. After her studies at Oxford, she spent a year at the Royal College of Music in London, where she won a Cobbett Prize with the Oboe Quartet in 1970. In 1972, she won a Gulbenkian Dance Award to work with the Ballet Rambert; in 1973, the Mendelssohn Scholarship, and a Harkness Award which took her for a year to the USA. During these years, she wrote works to commissions for the Cheltenham, Farnborough, Aldeburgh, and Norwich Festivals, and for the 1973 Promenade Concerts. While in the USA, she wrote the song cycle "The Same Day Dawns" commissioned by the Fromm Foundation and first performed by Diana Hoagland and members of the Boston Symphony Orchestra with the composer conducting.Nicola LeFanu has written music for orchestra, chamber groups, many works for voice and several operas. Her opera catalogue includes the chamber opera "Dawnpath" (1977), a radio opera "The Story of Mary O'Neill" (1986), a children's opera "The Green Children"(1990),(libretto by Kevin Crossley-Holland), and "Blood Wedding"(1992),(libretto by Debra Levy, after Lorca). Nicola LeFanu's fifth opera,"The Wildman" (1995), was another collaboration with Crossley-Holland; it was commissioned by the Aldeburgh Foundation and premiered in June 1995, with members of the Britten Sinfonia and Nicholas Cleobury. Following this premiere, performances of "The Wildman" then took place at Huddersfield, St. Magnus, Oxford, and the Theatre Royal, Bury. The opera is in two acts and scored for eight singers (playing 14 characters) with a chamber ensemble of twelve players. Recent new works include&"Sextet - A Wild Garden"(scored for mixed ensemble), which was premiered by Concorde in Dublin 1997;"String Quartet 2" was commissioned, and premiered, in London, by the International String Quartet Competition in 1997; "On the Wind" (for a cappella choir) was commissioned and first performed by Cantique, in Cork in 1997; and "Duo Concertante"(1999), for solo violin and viola and orchestra, was commissioned and premiered by the Northern Sinfonia in March 2000. Since 2000, LeFanu's music has been published by Edition Peters.