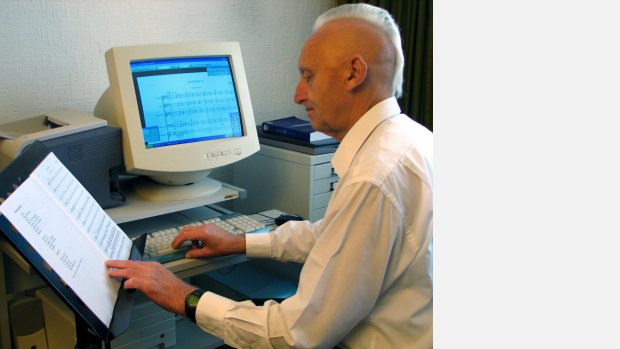 Alan Jones is a violinist (now retired) and composer based in Merseyside, England.  He graduated from the University of Liverpool with the degree of MMus (specialising in composition under the supervision of James Wishart) in 2000.  His Sinfonietta was given its first performance by the Liverpool Mozart Orchestra to great acclaim on 3rd November 2007.  A recording of his Three Times Five for large chamber ensemble is due for release by Ablaze Records on 15 January 2021.  He is particularly interested in tonality but within a variety of modes, not just major and minor.  This includes experimenting with some microtonal modes as well as the old church modes.  Some of his scores can be viewed on the British Music Collection and some. can be purchased through Score Exchange.

Alan was born in Liverpool in 1935 and was educated at Quarry Bank High School now Calderstones School.  He studied the violin privately and was a member of the Merseyside Youth Orchestra now the LPYO.  After completing National Service (mainly in the Light Orchestra of the Royal Corps of Signals), he studied Chemistry at the University of Liverpool and started his career as a research chemist, but following postgraduate research at the Manchester College of Science and Technology (now part of the University of Manchester), he followed an administrative career at the University of Liverpool.  Throughout this time he remained active as a violinist (particularly with the Liverpool Mozart Orchestra) and through further private study.

Alan Jones is an active Member of the Rodewald Concert Society and has spent much time researching the history of the society (which celebrated its Centenary in 2011) and of the Rodewald family.  He also researched composers with Merseyside connection to help promote them during 2007 (800th Anniversary of Liverpool’s charter) and 2008 (Liverpool European Capital of Culture) and set up a web site of Composers with Merseyside Connections.

Apart from his interest in music, Alan is a keen mountaineer and skier.  This has taken him as far afield as the Himalayas and Arctic Greenland where he undertook some first ascents.  Until his retirement, he taught at his local ski club and has been active in the work of the skiing governing body as well as participating in international masters’ races.