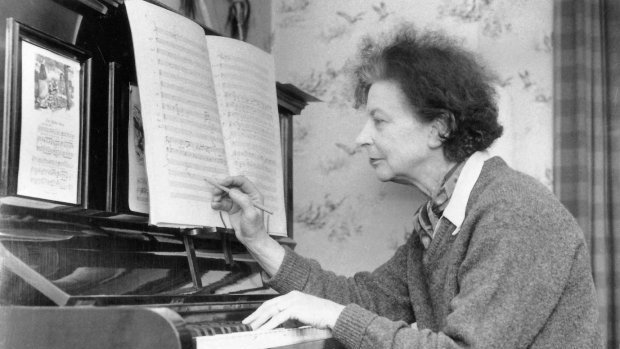 The English composer, Phyllis (Margaret Duncan) Tate, was born to an architect. She was discovered in 1928 by Harry Farjeon, who prompted to her to receive formal music training, which she took up at the Royal Academy of Music for the next 4 years. While at the academy, where she studied composition, timpani, and conducting, Tate composed a number of pieces while attending the academy, including an operetta entitled The Policeman’s Serenade. However, due to the fact that she was extremely self-critical, all of her compositions from before the mid 1940's were destroyed by Tate herself.

The first piece Phyllis Tate would claim as her own was a concerto for saxophone and strings, written in 1944 commissioned by the BBC. However, none of this would bring her the acclaim she received in 1947. In those three years, Tate composed four pieces: the concerto, a sonata for clarinet and cello (1947), Songs of Sundry Natures (1945), and Nocturne for Four Voices (1945). Furthermore, Tate enjoys using atypical instrumental combinations. Songs is scored for a baritone accompanied by a flute, clarinet, bassoon, horn and harp. Nocturne is written for four voices with a string quartet, double bass, bass clarinet, and celesta . However, immediately following this abundant creativity, Tate fell into a five year slump due to illness.

For not wishing to write larger instrumental works, Phyllis Tate’s overall artistic output is extraordinary. All in all, she experimented in many genres, including orchestral music, chamber music, operas and operettas, sacred music, piano music, and vocal music, which is where she concentrated her efforts. Her most famous pieces, aside from those mentioned above, include her setting of Tennyson’s The Lady of Shalott, which was written for the 10th anniversary of the BBC Third Programme; the opera The Lodger, based on the tale of Jack the Ripper; her Prelude, Interlude, and Postlude for chamber orchestra; All The World’s A Stage; Saint Martha and the Dragon; The What d’ye Call It; a Secular Requiem; and London Fields, a four movement suite, also commissioned by the BBC. She is known for forming unusual instrumentations in her compositions. Her musical style has been called avant-garde and she is recognized for appealing to amateur performers and children.

Phyllis Tate believed that “music should entertain and give pleasure”. In 1979, she wrote “I must admit to having a sneaking hope that some of my creations may prove to be better than they appear. One can only surmise and it’s not for the composer to judge. All I can vouch is this: writing music can be hell; torture in the extreme; but there’s one thing worse; and that is not writing it”. After hearing her play at a lunch one day, Dame Ethel Smyth said “At last I have heard a real woman composer!” However, since, at that point, E. Smyth’s hearing was less than ideal, so Tate did not put much stock into this.