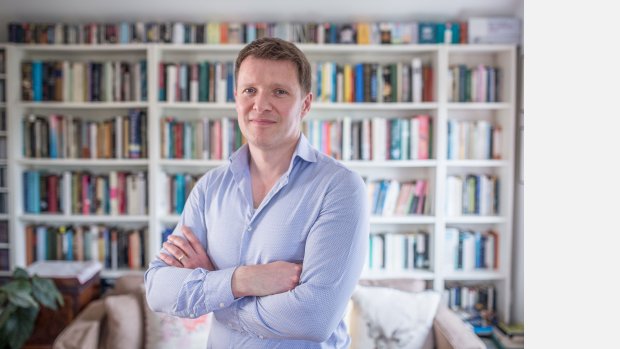 Born in Wales in 1969 and brought up in Warwickshire, Julian Philips studied music at Emmanuel College, Cambridge, and is one of Britain’s most versatile composers. His music has been performed across the world at major festivals and venues.

With a particular affinity for music for voice, Philips has been critically acclaimed for his song settings. His choral music is similarly celebrated.

As Glyndebourne Opera’s first ever Composer-in-Residence, Philips completed two chamber operas in 2006-9: Followers, a site-specific promenade opera with a libretto by Simon Christmas, and The Yellow Sofa with a libretto by Edward Kemp, subsequently featured in Glyndebourne’s tour and shortlisted for a British Composer Award. The year-long development of Knight Crew was filmed by BBC Television and the resulting series, Gareth goes to Glyndebourne, aired in June 2010. Philips’ opera How the Whale Became, a collaboration with Edward Kemp, was based on Ted Hughes’s The Dreamfighter and other creation tales, and was written for the Royal Opera House’s Christmas 2013/14 season. His most recent full-length opera, The Tale of Januarie, was staged by the Guildhall School in Spring 2017, boasting perhaps the first libretto in Middle English by Stephen Plaice, and based on Chaucer’s The Merchant’s Tale.

Ballet and opera are natural progressions for Philips, who already has an impressive track-record in composing for the theatre and has written two full-length ballets for choreographer Michael Corder and English National Ballet; a ballet based on Les Liaisons Dangereuses was followed by The Snow Queen in 2007. Symphonic works also form Philips’ oeuvre with All that remains commissioned to commemorate the centenary of the beginning of World War I receiving its world premiere by the National Orchestra of Belgium. Ballades Concertantes, for solo viola and double bass with chamber orchestra, premiered with Virginia Slater, Stacey Watton, and the Orchestra of the Swan in 2017, conducted by David Curtis.

A vital force in education, Philips is the Head of Composition at the Guildhall School of Music & Drama where he was made Honorary Fellow in 2007, and conferred a Professorship in 2014. He was responsible for the creation of both a new Masters Programme in Opera-Making & Writing and a Doctoral Composer-in-Residence scheme in association with the Royal Opera House.