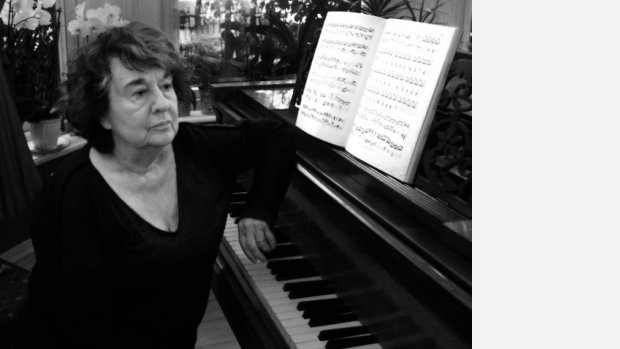 Erika Fox was born in Vienna in 1936 and came to England as a war refugee. Her highly distinctive musical style is a result of a childhood suffused with music of Eastern European origin; Chassidic music, liturgical chant embellished with heterophony, modal ancient melodic lines that have much in common with the folk music of Eastern Europe. A prolific composer, she studied with Harrison Birtwistle and Jeremy Dale Roberts and has a catalogue of 52 works showing a natural affinity for the human voice, for theatre and the stage.

In the 1970s, she was actively involved with the Fires of London, the Nash Ensemble, Dartington and SPNM. Between 1974 and 1994 her works were regularly performed at London’s South Bank Centre, major festivals and have received broadcasts in the U.K. and abroad. ‘Shir’, for large ensemble was featured on Channel 4 Television. Fox’s critically acclaimed puppet opera, ‘The Bet’ (1990) received over 100 performances following a premiere at the Purcell Room. ‘Kaleidoscope’ won the 1983 Finzi Award and her chamber opera ‘The Dancer Hotoke’ was nominated for an Olivier Award. In 1990 Fox accopmanied John Cage to Paris and Strasbourg and took part in his ‘Europeras 1 and 2’ commissioned by the Almeida Festival.

Erika Fox has been commissioned by Festivals including Vale of Glamorgan, Cheltenham, Festival of Women Composers in Berlin and Amsterdam, Leamington, Almeida, Sonorities in Belfast. Her work has been performed by Lontano, New Music Players, Contrapuncti, Chamber Domaine, Gemini, Feinstein Quartet. Her music has been performed in Greece, Turkey, Canada, Italy, Slovakia.