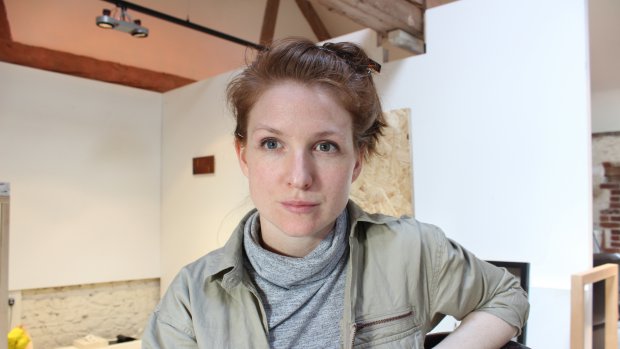 Sarah Hughes on Embedded with the South London Gallery

"I think about space and duration as equivalents, so the dimensions of the galleries were thought about in the same sense one thinks about duration when writing composition – how can the structure of the work be negotiated within a certain space/time?"
New Voices

Composer of sound and sculpture/installation, Sarah Hughes, explains how her interest in the two areas ‘lies in the area of composition that precedes sound – making’. Her exhibition Demo at the Cass Sculpture Foundation is a variation of her work whilst in residence with the South London Gallery. A promotional poster for it reads, ‘'Each For All and All For Each,’ and is described by Hughes to reflect ‘the current Conservative government's socially divisive policies and the ever increasing degradation of our social composition’. Introducing her admiration for Fluxus member, George Brecht, Hughes also goes on to elaborate about her projects BORE and Compost and Height, whilst also touching on how contemporary and experimental musics fit into modern culture, and the ‘translucency’ of sound…

My interest in music comes predominantly from my work in composition, which spans improvisation, text scores, publishing, sculpture and installation. There is a lot of questioning about what each of these things can be and how they interact. For example, the role of silence and space has always been important in my work, and so has the work of George Brecht and the idea that everything that happens can be material for composition.

What attracted you to apply for the Embedded programme with the South London Gallery?

The opportunity to focus on composition in a contemporary art context for a year. When I say I’m a composer, people immediately make the connection with music, but not with sculpture or visual media. I find a lot of parallels between the way I work when composing music and the process of making sculptures or installations, and the residency seemed a perfect opportunity to address these thoughts in a comprehensive way, and with receptive and supportive organisations.

What was your highlight of the residency?

When I started researching the history of SLG, I was directed towards the Southwark Records Office where I found a wealth of information about the founding of the gallery. It has a fascinating history and this research enabled me to think differently about the materials and techniques I was using, and make links between composition and the historic and contemporary socio-political aspirations of the gallery.

What do you intend to do now that the project has ended?

When I work with composition for instrumentation, I often re-write a piece several times for different ensembles. I concluded the Embedded residency with an exhibition at South London Gallery entitled One Dozen and Zero Units and much of that work has gone on to be exhibited at Cass Sculpture Foundation.  It’s great to see how the work changes in a different exhibition space (the architecture and instrumentation being largely analogous) and to think about what is crucial to the structure of the work – what can be added and taken away. For example, I felt some of the sculptures and structures that were in the SLG exhibition where crucial to the exhibition at Cass in order for it to work as a ‘variation’. From there, I could work on new pieces made in response to the sculptures and context at Cass.

I have also published a book called Practice Composition, which acts as a catalogue for the SLG exhibition and gives more information about the research and rationale behind the exhibition.

I have quite an esoteric view on what composition is and can be so I’m not sure my advice would be very helpful! I guess the most useful advice I could give to someone working in musical composition or within the contemporary arts is not to censor yourself.

How do you integrate sound with physical space to convey a message to your audience?

It’s often thought that because I’m a composer that works with sculpture and installation, I use sound as a material in exhibitions. My interest in the two areas lies in the area of composition that precedes sound – making. The act of writing a score – of placing various events together – is very similar to the act of working on an installation. It is the technique that is the same across the two disciplines, rather than the materials. That said, when I’m working on a score for instrumentation I do think about how the sounds might work in space. I’ll sometimes include the position of the musicians if I know the venue a piece will be premiered in, or I’ll draw out the score in a sketchbook to think about how it works spatially. I also work with graphic scores, which obviously cross the two disciplines in a slightly different way.

How do you feel that contemporary – and ‘experimental’ – music and art enriches the society we live in?

Obviously, having alternative forms of making, distribution, performance and exhibition is vital. Although, I find that the area of contemporary music I’m involved with is quite different to that of contemporary art.  What can start out as a radical position is often institutionalised – it’s always interesting to note what isn’t and also to see, retrospectively, what is adopted by popular culture and/or the market.

Your motive for creating Compost and Height was to ‘facilitate’ and promote ‘the dissemination of contemporary music and associated art’. Why is this important to you?

Compost and Height started by making music available for free-download at a time when that wasn’t so common. It was a way to make a certain type of music accessible to a wider audience and introduce people to musicians and artists that we found interesting. As free downloads and streaming became ever more popular, we started to do things slightly differently. We started organising performances of pieces that aren’t often played, either because they’re logistically complicated, such as Michael Pisaro’s Rice Fall, or the composers aren’t so well known in the UK, such as Joseph Clayton Mills and Adam Sonderberg. We also started publishing essays by composers and musicians, and more recently publishing text-realisations of scores.

We are still passionate about promoting areas of contemporary music that aren’t so well known, and in creating parallels with other disciplines  such as sculpture and writing. I think Patrick [Farmer] and I both see Compost and Height as an extension of our own work, almost as a medium in its own right.

Your BORE project is a platform that publishes musical notations and scores. What was your motivation for being involved in this project?

David Stent and I started BORE a couple of years ago when we realised that almost all of the compositions we performed came via the composers or via friends of composers. It didn’t seem that easy to get hold of contemporary pieces (of a certain kind), without already being involved with the music to a certain degree. I like the idea that someone might take a chance on a composer they know very little about, or stumble across a new type of music in a book shop or library. The editions are a cross between an artist book and something much more functional and municipal – as we are both performers and artists we try to design them ergonomically.

Your exhibition at Cass Sculpture Foundation is ongoing at the moment. What is it about? Can you describe it?

It’s a variation of the work exhibited at SLG. It’s called Demo and is in a very different space to the upper Galleries at SLG which is on Peckham Road. The space at Cass is a pavilion set in a sculpture park in the woods. About half of the work is from the SLG exhibition, with the rest being made for the exhibition in response to the site and its setting. I was intrigued to see how this would work in relation to thinking about composition for different instrumentation, and how that changes the character of the work.  The ‘poise’ of the work runs through both, and the sense that the objects have been ‘composed,’ i.e. placed together in a considered and intentional way. There is a finissage on May 26th where Patrick Farmer will be performing solo snare drum. There is a poster in the Cass exhibition that reads 'Each For All and All For Each' which speaks for the relationship between the objects, and to the current Conservative government's socially divisive policies and the ever increasing degradation of our social composition. I think there is something about a snare drum solo that speaks to that. I also wanted the performance to be by a musician who is familiar with improvised performance and who is also very technically proficient. There is a reference here to the Arts and Crafts movement and the artists who were instrumental in setting up South London Gallery. This has carried over into the Cass exhibition - with hand-marquetry and stone carving alongside more improvised sculptural pieces.

How do you balance improvisation with composition as a composer?

It’s crucial to the work. My scores always contain an element of improvisation and I find the performance of them to be most convincing when they are performed by musicians who are comfortable with improvising. A good realisation is often reliant on a certain sensibility that isn’t determined by technical ability. The sculptures and installations also share a balance of improvisation and composition, with the material and objects being created and selected in advance but their position being decided in the space.

Do you feel that your installations have a meaning to convey to your audiences? What are they about?

Regarding the SLG exhibition, much of the material related more or less to the history of the gallery, obviously with an overarching concern for composition. The hand-marquetry came about after researching the original gallery floor by Walter Crane; the white concrete ball was a reference to the finials which surmount the building; the sentences and slogans were gleaned during research into early gallery documentation, etc. The links with composition were analogous, I designed plinths that allowed the viewer to see through the space for example, as an analogy to the ‘translucency’ of sound; the work was placed in small grouping and as single objects, a loose analogy to a simple melody or single note, which appear frequently in my musical compositions. I think about space and duration as equivalents, so the dimensions of the galleries were thought about in the same sense one thinks about duration when writing composition – how can the structure of the work be negotiated within a certain space/time? Etc.

Music We’d Like to Hear, a concert series curated by Tim Parkinson, John Lely and Markus Trunk. They programme compositions that have never been performed in the UK, composers that aren’t very well known, aren’t easily categorised or haven’t been performed for centuries. It’s always in a beautiful London venue and the performers are fantastic. They haven’t published their programme for 2016 yet, but it’ll probably take place over three Fridays in July.