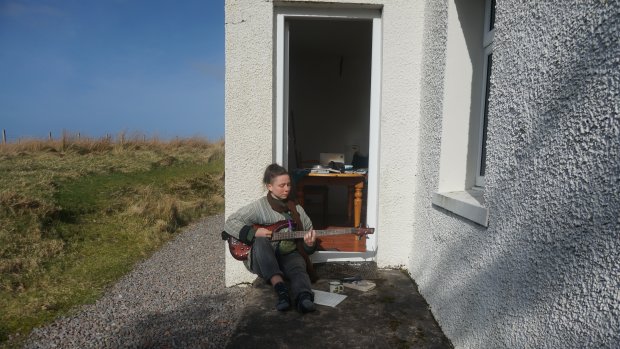 As part of Sound and Music’s Composer-Curator programme, Rufus Isabel Elliot talks us through FOLKS’ SONGS, a new EP from the trans-music making world of OVER/AT.

As part of Sound and Music's Composer-Curator programme, Rufus Isabel Elliot talks us through FOLKS' SONGS, a new EP from the trans-music making world of OVER/AT

The voice is fraught for me. I hear in my own voice the marks of my past experiences. I have struggled personally with speaking out, with giving testimony, and with wondering if a person can really speak and be heard.

Working on this project has called forth new approaches to this. OVER / AT began – once upon a time — as a concert series celebrating trans and non-binary singing voices. Whilst concerts are forbidden, I have strangely had the space to recognise OVER / AT as a whole music-making world which cares for trans, non-binary, and other gender-diverse voices. By this I mean not only our voices as in our identities, but our actual speaking, singing, howling voices.

The voice is a uniquely trans issue. Or… is gender is a uniquely vocal issue? It can be difficult, bound up in questions of passing/not passing, affected or not variously by different aspects of trans healthcare, which are in themselves variously accessible or more often inaccessible, and shaped by all kinds of biased assumptions.

The OVER / AT world has been waking up in part due to the pressures of the pandemic, as I searched for ways to continue work on the project. Since I began working on the project in earnest, back in October, I have not seen a single person involved with it in person. I have, in fact, met less than half of the team in person. In a few cases, in spite of the vocal inspiration of the project, I have not even heard their voices.

The challenge of diving into this world during Lockdown(s) is not small. At times, it has been a pressure-cooker-for-one at OVER / AT H.Q..  Working on a project which sits so close to my own experience has been difficult. So many of our conversations brush up against painful feelings.

At other times, it has been a safe space for one, here at H.Q.. To weather the twists and turns of the last year, I have been undertaking my own kind of tough-as-coffin-nails-gender affirming hormone therapy, administered through regular dips in the ocean. The effects of this particular form of hormone therapy on the voice are yet to be fully documented.

This is a community-oriented project. It involves a dozen artists from around Scotland. We each have our own particular ways of seeing, experiencing, and talking about these issues. And the work has its own consolation — three new pieces of music (so far!) by Malin Lewis, Harry Josephine Giles & Vivien Holmes, and Matthew Arthur Williams, beautiful scores, learning resources, the contributions of so many artists – and I’m nowhere near done with the project.

This is the British Music Collection, and so this is a story about place. The OVER / AT logo, designed by Leo Valenti, is a stylisation of the O and the A into a lake and a mountain. These are not just any lake or any mountain. This is a particular place maybe a day’s walk from where I am writing this, where the F— Loch lays out at the foot of the F—field. I went out for a bike ride today, and glimpsed the teeth of A’ Mh— from the top of the pass.

‘OVER / AT’ in itself is a joke of sorts about transness and place. Trans not -cend, -late, -istor, or -pose, but trans like ‘across’, like ‘that place over there, just across the glen floor’. It is a place of many ways. The moods of the place can be: rain, hail, sleet, snow, sun, wind, water, thunder, sunrise, sunset, bog myrtle, midges, quartzite, spiders, ptarmigan, cliffs, fields, ruins, the causeway… It is contradictory, and it changes. Its fingers after rain reach fractionally further out than after drought.

Hundreds of people used to live here, in all kinds of settlements. I even learned recently about a Creagan an t-Sasunnaich whilst sleuthing the records of the villages — and then clearance villages — and then ruins — in and around L—, which was inhabited by an English ‘Bard’ in the 18th century. The area was cleared by an English Lord and coal mine owner in the 19th century.

This world is slowly stretching and waking. It is not new, it has not been discovered, it has not been invented. It is only just remembering, springing back into motion. Wearing my producer shoes, I am only waking the sleepers of the OVER / AT world. Our artist Jamie Crewe even designed a beautiful new gathering in our world.

And all the while, I have been working on my own compositional world, collaborating with singer Lea Shaw to develop a new piece together which belongs to the autumn season of the OVER / AT world. There are more ways of approaching our voices than there are folk in the world. My work with Lea is another side to the same rockface as our E.P.. We are working with the contrasting musical qualities of our own two voices, sculpted as they are by our various lived experiences. We want to explore the places our experiences endure in our voices, how our voices modulate in order to speak about different kinds of experience.

From the first time we improvised together, we have spoken in terms of watery boundaries. We asked ourselves: are we still standing at the top of the cliff, or have we found ourselves down on the shore. Have we, even now, been swept back to the salty sea? These were both emotional and musical questions.

Our lived experience meshes in with the shifting lines of place – another corner of the OVER / AT world:

“A wave, where you’re being engulfed by everything […]”, we said,

“I was starting to see different pathways branching out…”

We drew seascapes, and we listed grey, mole-dark, erased grey, empty black, icy blue, and dirty white. We didn’t yet know what world we were in — whether we were even in it, or on the other side of the river still. We have taken up the bass guitar, turning it into a modern Lyre of Orpheus, rooting ourselves in our conversations/footsteps.

I have worn a lot of hats, curating and coordinating, typesetting and transcribing, drawing and imagining, and not least composing. It’s been an important and personal project for all of us, and there is always a lot to do. When we were going through draft after draft of (every time, we imagined afresh) the “finished” audio, I even began dreaming in the world of the E.P., and hearing the music there.

Now that our E.P. is being released into the world, I can look across the glen, not only a metre or so in front of my feet. I feel proud to have handed round what tools I could gather for the project to a group of trans, non-binary, and gender-diverse folk. It is a joy, too, to have seen what they passed back. Kay Logan, our mixing and mastering engineer, beautifully brought the E.P. together as a complete piece of work. It is chock-full of stories – some of each of ours, with bridges reaching out into other worlds and conversations in our communities.

FOLKS' SONGS is a new EP from the trans music-making world of OVER/AT. It comprises three exclusive, newly commissioned audio pieces by three Scotland-based trans, non-binary, or other gender-minority artists: new songs for/by/with the Folk. It is unlike any trans music-making which has come before it in Scotland. Pre-order FOLKS' SONGS from Bandcamp

On Friday 26th March, to celebrate the launch of the FOLKS' SONGS EP, journalist Claire Sawers will be hosting a discussion on trans, non-binary and gender-diverse voices and music-making with the artists involved with the project. This event is presented in partnership with The Wire. For more information and to book a place.

Rufus Isabel Elliot is a composer and musician. In the last couple of years, Rufus has worked with the likes of the Nevis Ensemble (with whom it was composer-in-residence 2019), Red Note Ensemble, sound festival scotland, and Magnetic North. Rufus' collaborative work has included projects with composer Fergus Hall, artist Iman Tajik, singer Lea Shaw, and poet Ella Frears.

Find out more about Rufus Isabel Elliot at its British Music Collection profile and website.