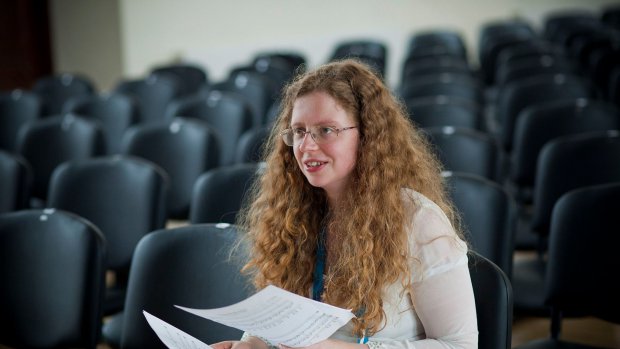 "if you consider that the origin of the word comes from the Latin componer meaning ‘one who puts together’ I think it is an adequate reflection of what I am doing – putting sounds together."

I have always been obsessed with music, particularly pop music, and as a young child I would invent songs and tunes on my keyboard but I never considered myself a ‘composer’ as such, although now I realise thatcomposing is what I have always done. I started playing clarinet when I was 12 years old and I decided to study music at university primarily because of this. When I first attended composition seminars as an undergrad I wasn’t really sure if composing was for me. I had never really heard any contemporary classical music and at first it seemed quite strange and alien and I struggled to understand where I fit in in this world. My composition teacher Camden Reeves had a big influence on me as he encouraged us to think about our own individual compositional voices and this gave me the confidence to write what I really wanted to hear. In my final year as an undergraduate I wrote a song cycle setting texts by Percy Shelley. I really enjoyed composing for voice and I realised that I wanted to pursue composing further. I was at the end of my music degree but had only just realised what I was really interested in so I decided to continue studying for a masters in composition and things developed from there.

You chose to work with accordionist Luke Carver Goss for this piece. What is it about writing for the accordion that appeals to you?

I first became interested in composing for the accordion when I attended a composition course in Poland in 2014 and had the opportunity to develop a work with the accordionist Maciej Frackiewicz. Having never written for accordion, I had to do a lot of research into the instrument and realised the appeal of the diverse soundworlds the accordion can offer. The timbre of the instrument can be changed quickly by the register switches and there is plenty of score for exploring the layering of musical lines. I was also really interested in the fact that the accordion is essentially a wind instrument and can produce extremely sustained sounds without the performer having to interrupt the sound to breath. I explored the accordion again in 2016 in Lithuania when I attended another summer course about composing for accordion developed by the accordionist Martynas Levickis. Therefore I was really excited to work with Luke and explore the accordion in a new context, this time with a chamber ensemble of Royal Northern Sinfonia players. It was particularly exciting to work with Luke’s electronics FX box which we had lots of fun with in the workshops.

Your piece developed very quickly after the first workshop and was already almost complete in the second workshop. Did you always have a clear vision of the final work going into this programme?

I always had a clear idea of the source of inspiration for the piece, which was the Mayan calendar, and I knew that I wanted to compose a piece about time. This helped me come up with musical materials quite quickly although I didn’t always have a clear vision of the final work. The first workshop really helped me refine my ideas as after that workshop I realised that I wanted to work with a smaller symmetrical ensemble of accordion, two violins and percussion which offered coherence of sound. The original sketches included brass instruments aswell but after the first workshop I didn’t feel that this ensemble was suited to my materials. Once I had the smaller ensemble in mind the work formed quite quickly and the ideas became more coherent and I was able to put together a full draft very quickly. This is usually how the compositional process works for me, once I understand the roles of the instruments within the ensemble and have a clear source of inspiration; I generally compose pieces quite quickly.

I think a lot of people are afraid of applying the word composer to themselves as it has lot of connotations of ‘great’ composers of the past and conjures up images of old, crazy-looking men locked in their attics. However, if you consider that the origin of the word comes from the Latin componer meaning ‘one who puts together’ I think it is an adequate reflection of what I am doing – putting sounds together.

Find out more about Emma on her British Music Collection profile