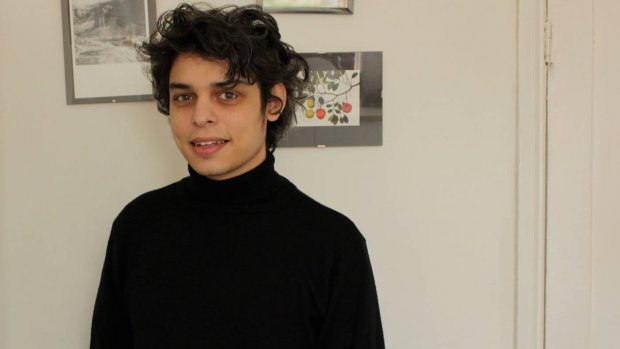 "[Composition is] not a career; it’s a habit."
New Voices

Lawrence Dunn has been working at Sounding Motion on Portfolio, incorporating sound and movement to produce music for viola of which he likens to Hindustani raga. Working with Stephen Upshaw and Imogen Bland, Dunn hopes to maintain his relationship with the creative minds of those at Sounding Motion to continue to produce new and innovative works. In this interview, he declares the importance of listening other’s music in pursuing a career in composition – or as he eloquently terms it: a ‘habit’ in composition…

So, this is a hard question to answer. I think generally the music I write right now is concerned with harmony (and melody too – though, I think ultimately they’re the same thing). Harmony that isn’t generated from analysis, say, but is more redolent with bits of the past; tunings, temperaments, colours. As well as obtaining something personal – sensory, spirited, mathematical, intuitive, resonant. Uncanny and familiar.

Going to gigs, I think. I mean, there are a bunch of usual sources of inspiration – CDs, radio, the internet – but I think personal contact with people making music is the best. It’s only live contact that can make it seem ‘doable,’ really. Great concerts (and pub conversations) can give you an awful lot – probably even more than formal teaching.

What attracted you to apply for the Portfolio programme with Sounding Motion?

I didn’t know much about Sounding Motion (subsequently I found out they had done a residency at Huddersfield, where I study presently), but I did know about Stephen Upshaw who is this great viola player who worked with Wolff and others, so it has been a treat to write for him.

Describe your experience working with Sounding Motion. How do you think it is going?

It’s been great so far – as I write this (early June) the music is essentially done, but not rehearsed or choreographed. But Imogen Bland (the choreographer) is great, and I think we’ll make something that’ll be exciting.

What do you intend to do after your project has ended?

Would be lovely to carry on having a relationship with Sounding Motion, it’s a great group of people. Otherwise, there’s this PhD that’s got to be gotten on with…

What is the most valuable thing you have learned about composition?

The bulk of one’s time as a composer should be spent listening to music that you didn’t write.

How do you integrate dance and movement with music to convey a message to your audiences?

I have no idea. Can you? But then I’m not so interested in ‘conveying’ a message. If I am, then I don’t know what it is.

When did you first become interested in dance and movement?

As kids, my sister and I used to do Dalcroze (once a month in St Albans if I recall). That was memorable, and I expect important for personal musical development. I learnt how to teach it to children myself in fact – it was a large(ish) part of early years music teaching I did when I worked in a primary school.

What kind of things have you been getting up to at Sounding Motion? What have your pieces been about?

Pieces I've written in the past have often been ‘about’ things—but in this case, as half of the piece is choreography (which hasn’t been devised as yet), both Imogen and I don’t have a pre-set idea about the piece's specific ‘aboutness’, apart from a few formal concerns. The music for viola is curtailed to a single, rather unfamiliar scale, and there’s also a sense of stepped acceleration in the music. (In fact, it occurred to me, after having written it, that structurally it was akin to Hindustani raga, whose structure generally accelerates – and indeed, it was the only piece I’d written that does this. Though here, I should say the duration is very much shorter than most ragas).