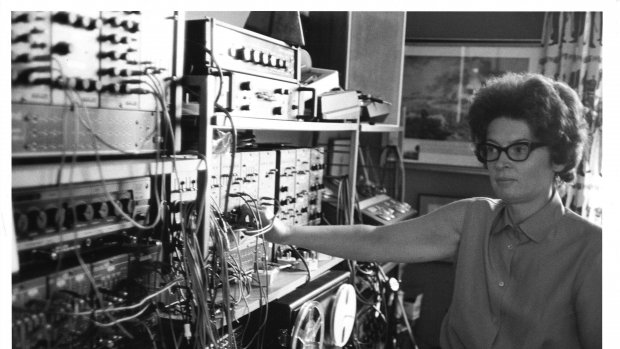 I had come across Janet Beat a few times in my research on electronic music pioneers. I first discovered her thanks to curating a Google Cultural Institute exhibition for Sound and Music, in which I tapped into the British Music Collection’s physical archive based at Heritage Quay in Huddersfield. The title pages of her scores were creative, expansive and quirky, as were the combination of instruments: oboe and a synthesiser, tape and effects with acoustic instruments. She then cropped up again as I was absorbing Ian Helliwell's book, Tape Leaders, which honours her as among the key pioneers in early British electronic music, and my curiosity was fully piqued.

I wanted to know more. What an ace and apt surname. How did she get into using technology for her compositions? Did she know Delia (Derbyshire) and Daphne (Oram)? Did she still compose? Did she have a satisfying career? As one of the few living composers active in the early days of electronic music, I knew I had to speak to her, listen to her, and hear about her journey in sound.

We had a lovely chat over the phone, and I am most grateful Janet is happy to share this fascinating and inspiring conversation.

Janet just had it in her bones - she was a composer. She told me “I wrote my first piano piece at 3 and half years old”, and how even before this would sit under the same piano and put her ear to the soundboard, listening to the “rainbow tones” as she called them. Picking up the harmonics and overtones in the piano, she was understandably enchanted.  When asked what she was doing, seemingly daydreaming, she would answer “having a concert in my head” as the music came to her fully formed.

Dancing on Moonbeams by Janet Beat - 1980 - score and key.jpg 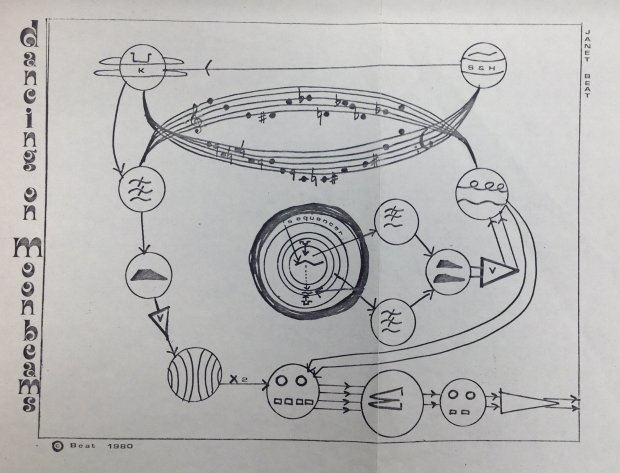 Janet had to compose in secret, however. Those around her told her “girls didn’t do that kind of thing”, and that being a musician or artist was not a respected career. Yet Janet was determined to be a composer, and that determination seems to have come in handy throughout her career. She continued to face adversity along the way. At university she was told she “admired the wrong composers” because she “liked spoken verse music like that of Pierre Henry.”

In the late 1950s Janet bought her first tape machine, and taught herself how to use it. This was played a key role in her subsequent career, teaching composition and music in higher education. Janet set up multiple electronic recording studios across the country, including one at what is now the Royal Conservatoire of Scotland, as well as at Worcester College of Education (now the University of Worcester). These featured a range of equipment including ring modulators, low pass filters and signal generators – tools similar to the BBC Radiophonic Workshop and other electronic sound studios across Europe. This was all alongside an attitude of resistance from some colleagues. She was ridiculed for her interest in microtonal music, told stereo would never take off, and faced staff who were dismayed that a “mere woman” had been appointed to teach harmony. 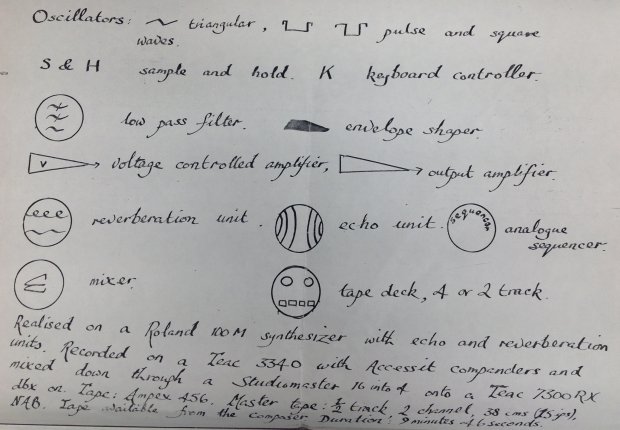 Janet was aware of Delia Derbyshire but never met her. She did however meet Daphne Oram, the other big name when it comes to women working in electronic music in the early days. Daphne invited Janet to her studio in Kent and Janet said she was “very encouraging of my work”. Along with Oram and Derbyshire, Janet’s published works are available, while some scores (with enchanting hand drawn covers) and cassette recordings can be accessed at the British Music Collection’s physical archive at Heritage Quay in Huddersfield, UK. 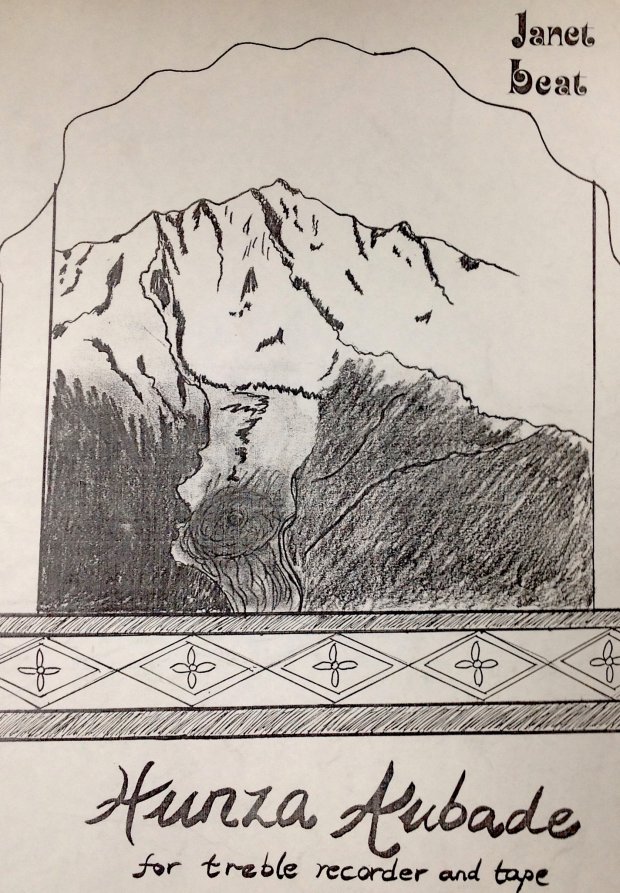 Now at 81, and living in Scotland, Janet continues to write. The music still comes to her. Interestingly, she has reached a point where she now believes “the voice is the most versatile synthesiser”, transcending technology and returning to the human. She has even donated her vintage kit to a student she met while giving a masterclass in Nuremberg, Germany.

Janet shares how earlier in 2019, she finally felt she got some recognition for her work – after being the first person to be granted a Lifetime Achievement Award by Scottish Women Inventing Music, a collection of music creators and industry professionals pushing for gender equality in the music industry.

It was incredibly reassuring and inspiring for me to hear from this hardworking woman who ploughed on with her mission despite obstacles. She’s been a pioneer all the way, and though met with resistance, ultimately garnered enough supporters so she could make it all happen. The ultimate wisdom I will cherish as I pursue my own wayward path in music: “You have to do what you’ve got to do, regardless of fashion.” Janet Beat, I salute your courage, achievements and dedication to the magic of music. 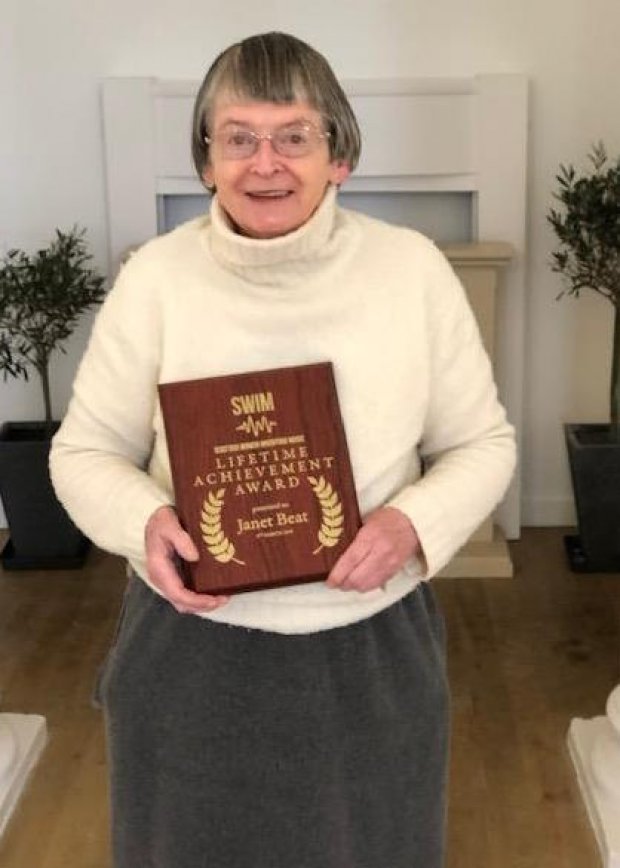 We're very excited to premiere a Sound and Music exclusive playlist of Janet Beat's selected work below. Many thanks to both Caro C and Janet for supplying these previously dificult to find recordings!

Caro C is a composer, producer and performer of her own brand of creative music, coming from a largely self-taught electronic music background. This “sonic enchantress” bridges the spheres of sound and music with a passion for found sounds (non-musical objects) to sculpt her sound worlds.

She has produced 3 albums and performed across Europe as well as most of the cultural hotspots in Manchester (UK) including Bridgewater Hall, Manchester Art Gallery and Museum of Science and Industry. Caro also enjoys sharing the power of the music working as a music (tech) midwife teaching others (One Education Music, Drake Music, Brighter Sound, Yorkshire Sound Women’s Network) and delivering sensitive sound design and music for other artforms including film, theatre, dance and sculpture. Caro instigated and is project manager of Delia Derbyshire Day, an electronic music charity championing creative pioneers past, present and future. Follow Caro’s sonic adventures on Twitter, Facebook and Instagram.