An Interview with Sylvia Hallett

Fifth in the series: SYLVIA HALLETT - violinist, player of the bicycle wheel and electronics etc. 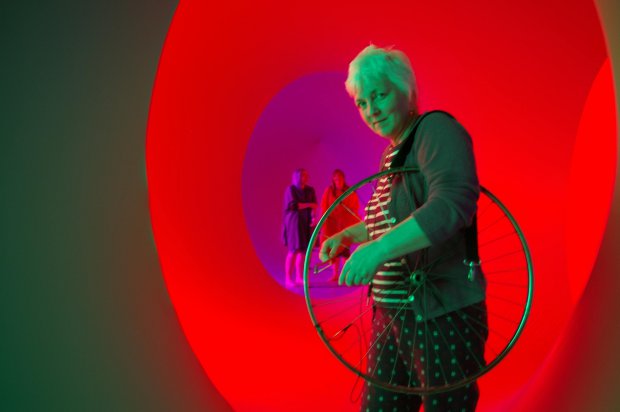 When I was a small child my sister and I would play "foot concertos" on the piano - you lie on the floor and play the piano with your feet, very different from piano practice.

I have always been interested in being a creative musician, wanting to compose music ever since I was 9. Around that time I was also interested in the possibility of making music with found objects. As a teenager I explored other sonic and compositional experiments and became interested in tape recording, cutting up tape, and changing the speed and playing it backwards, while at the same time playing folk music, running a folk club, studying classical music at the junior Royal College of Music, and being interested in Pierre Henry, Stockhausen, and all things electronic.

When I was 17 I met Clive Bell and we improvised together in my parents’ garden, me on guitar and him on flute. It was sort of tonal, but punchy too.

Today, for me, improvisation is about energy. How does the environment change when a sound is placed into it? How does it animate the space? I have to keep questioning and working with the energy of another person’s sound, creating an awareness of a relationship, a compliment.

It is important to be committed to any sound we make, to be totally immersed but at the same time have an overview voice in my head that can say ‘that’s enough of that now, time to move on’. Tomorrow I might give a different answer. 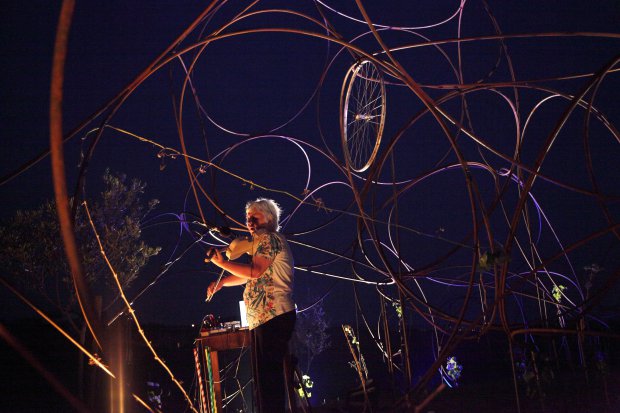 I grew up in a small town in Sussex, and went to Dartington College of Arts, because I wanted to be around people working in dance and the arts, not just music students (I considered some music students to be a bit stuffy and arrogant!)

Then I went on to study composition in Paris with Max Deutsch. After two years there I came back to England to complete a teaching Certificate of Education, and decided to do that in London, at Trent Park, as I thought everyone has to experience living in London at some point in their lives; I am still here.

I taught in a school for children with physical disabilities for 8 years, 3 days a week, which was perfect for developing other experimental work too, including occasional performances with Ken Turner's inflatable events - Action Space. The school I worked in was in Swiss Cottage, a stone's throw from The London Musicians Collective which had just taken out a lease on the building in Gloucester Avenue, Camden. This was an amazing time (late 70s, early 80s), as this space in Camden was one that we could turn into anything we wanted. As well as playing a lot of improvised gigs there I also took the opportunity to organise themed events: a masked ball, a banquet (food by poet Roger Ely), an evening of self-made instruments (the first performance of Paul Burwell's Bow Gamelan), an evening of sound costumes, an evening of guitar related events (included Davy Graham on oud, and Derek Bailey and others) and festivals - women's festivals and self-made instrument festival, etc.

During that time I was in the trio British Summer Time Ends (with Clive Bell and Stuart Jones), with whom I played at Chantenay festival and recorded several albums on nato label. I was also in the band Accordions Go Crazy (Mike Adcock). Both these groups combined free improvisation with song (the Kinks, Abba covers etc, or original songs), and we toured extensively in Germany and France.

As well as this, I was developing contacts and friendships in the world of dance. We had a group of improvising dancers and musicians called Still Mauve who would meet once a week to try out new approaches to improvisation. This took place sometimes at the LMC and sometimes at X6, or at the artists’ squat Highbury Home. 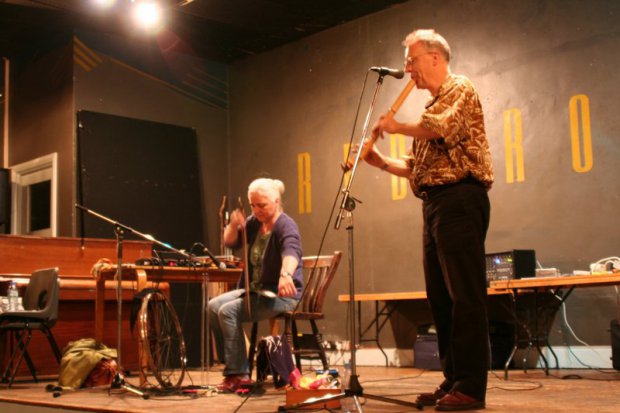 At one point I had a composition crisis, where I could no longer finish a piece I was supposed to be writing for some guitarists in France. It seemed pointless to write down all these dots for other people to play. So I "gave up" being a composer, and immediately was given my first commission by Jacky Lansley: to compose sound/music for a dance piece, using improvisation, tape collage and any other means I wanted. It was liberating. Since then I have been working both as a composer and improviser for dance, depending on the dancer/choreographer. When composition is involved it is mostly process based, so will include improvisation and recording of my collaborators, to construct something which is personal to them. Other collaborators include musicians David Toop, Elaine Mitchener, Lol Coxhill, Evan Parker, Susanna Ferrar, Paul Burwell, Maggie Nicols, Stuart Jones, Alison Blunt, Hannah Marshall and the London Improvisers Orchestra.  I also still regularly play in the trio ARC (with Gus Garside and Danny Kingshill), with Esha Jotwe Teka (with Potsdam based Thomas Kumlehn and Jerry Wigens) and in duos with Anna Homler, Clive Bell, Mike Adcock, Ian MacGowan, Matilda Rolfsson, and I perform solo too.

The main dancers/choregraphers I have worked with include Miranda Tufnell (working with improvisation to find a set form), h2dance (Hanna Gillgren and Heidi Rustgaard),  Jacky Lansley, Emilyn Claid, and the improvisers Eva Karczag and Chris Crickmay (including manipulation of objects), Rachel Gomme, Laura Doehler, Valeria Tello-Giusti and Anne-Gaelle Thiriot.

I have also composed and worked in theatre, incorporating some improvisation into the compositional elements with companies such as Royal Shakespeare Company, Young Vic, Wonderful Beast, Opera North, DooCot, and composed music for many BBC Radio plays.

Now I make a living from a combination of private piano teaching (including improvisation and composition) and working with theatre and dance companies or individuals - with the occasional session for Sheridan Tongue's Silent Witness (he likes to use the strange sounds I make on viola or bowed bicycle wheel). On top of this, I do the occasional paid improvisation gig. The most recent ones were playing in Victoriaville Festival with Anna Homler, playing in David Toop's opera "The Star-shaped biscuit", and at the solo sound event in Friuli Italy. 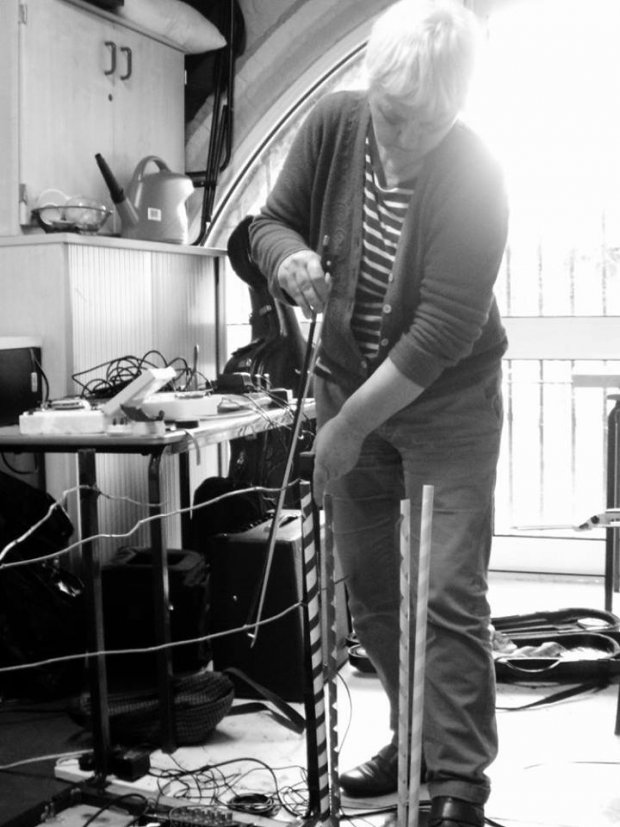 My favourite instrument is difficult to say. I feel I am more of a musician than an instrumentalist. I never wanted to do that virtuoso thing. I am known for playing violin, but I was never in love with it, and always looked for something else I could do with it - or other things I could bow. While at college I discovered bowing metal - music stands, making instruments out of junk - and that stayed with me. I also discovered that by using guitarists pedals I could re-create some of the effects of pitch-shifting, delay and looping that I had enjoyed playing around with on reel-to-reel tape-recorders.

So I also study violin-related instruments - the Hardanger fiddle from Norway (I belong to a group which learns this very complicated folk music) and the Sarangi (Indian bowed instrument) which I continue to have lessons on and have played on the soundtrack of Lord of the Rings. Both these instruments are taught by listening first rather than reading music, so I enjoy the challenge of keeping my ear in training. I started learning piano at the age of four, and violin as a second instrument when I was seven. I didn't choose the violin, and it didn't make a nice sound, and I didn't like practicing it - but it is very portable, unlike the piano. I found that I enjoyed playing the violin more if I was singing at the same time, so I developed that somewhat. Other things that I discovered are good to bow are a musical saw (this is actually a cheap saw from Wickes, which makes some great multi-phonics), a bicycle wheel, which I discovered while making music for the puppet company DooCot, (I fret the spokes using a guitarists bottle-neck or ribbed shells from the beach), and then anything with prongs e.g. a sawn off lampshade is a current favourite, and vines - grape vines or Russian vine.

I also like the instruments the kemence, from Asia minor, and the hurdy-gurdy. Additionally I like to use effects pedals - loop, delay and pitch-shift - very simple ways to transform simple sounds, without using a laptop. They enable me to make low sounds which is useful if I'm playing solo, as the violin doesn't go very low.

Last year, 2015, I was asked to make a solo sound event in an Italian vineyard. I used vines which had been cut and dried out slightly from the previous month, then I made a backing track of sounds of the wine company who commissioned the work - bottling process, fermentation etc - and improvised using violin, saw, bicycle wheel, vines and voice, with effects pedals over the top. It was to celebrate the 100th birthday of Livio Felluga, the founder of the wine Company. I recently used the Russian vine from my garden in a solo gig at the Linear Obsessional Arts Cafe.

I have also been re-connecting with playing without effects pedals in the duos, with Ian MacGowan, and with Matilda Rolfsson, using a timbre based approach to the violin. I am not interested in playing fast cascades of notes, but working more on how the bow connects with the string, trying to relax more in the shoulders, and work the fingers of the bowing hand - it's also a good idea to not drink coffee before playing. I would like to be able to draw the bow without it bouncing at all. When I play with people I try not to have any preconceptions.

I am currently working on a project with choreographer Jacky Lansley, using sounds and voices from the rehearsals, and doing a kind of musique concrete manipulation on the computer (currently using logic software); it may also involve bowing chairs. As well as that, I am currently working with an actor for Opera North, doing our version of part of Wagner's Ring Cycle for 6 year olds and their families. I improvise on Hardingfele, accordion, seljefloete, and kantele, using themes from the opera.

I am also looking forward to making some more underwater field recordings soon. These don't always get an airing, but are just for my personal enjoyment. 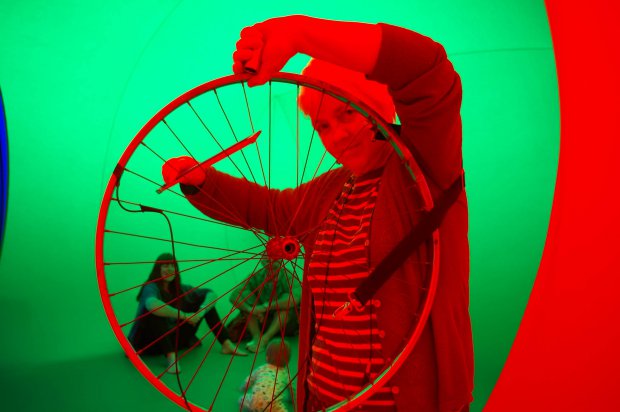 The opportunity to work solo but with a dancer or visual artist inspires me - when there is someone to bounce off e.g. Miranda Tufnell, Eva Karczag, Chris Crickmay.

I am also inspired by: Clive Bell, David Toop, John Cage, my neighbour's forest garden, Paul Burwell, Stockhausen, my son - Maxwell Hallett and the numerous bands he plays in, English folk music sessions, Norwegian Hardanger fiddle music, frogs, wind, trees, places, Indian classical music, Ottoman classical music, London Improvisers Orchestra, all the people I have ever worked with, walking around my house looking for sounds, putting grass in my ears and listening to the wind blowing through them, an album of Albanian folk music, Nils Oekland, J.S.Bach, the duduk, the curlew, the first bird to sing in the darkness before dawn, Tarkovsky, Svankmeier, my Mum who recited poetry and sang out-of tune lullabies to me, my Dad who sang Schubert songs, elastic bands, bits of wood, metal clamps, metal gates, things that grow in the garden, wooden chairs, distant aeroplanes, the sound of flying geese, screaming swifts, beeping bats, The Incredible String Band, Messaien, stars, Kandinsky, the sound recordings of Peter Cusack, wind turbines and albums that I haven't decided to listen to, and don't yet know what they are.

An Interview with Sylvia Hallett