An Interview with Kay Grant

"There are always times – in conversation as well as in improvisation – when the best response is silence..."

Chapters: Beginnings, On Improvisation, Life and career, The Instrument, The Work, Inspiration and Other Thoughts 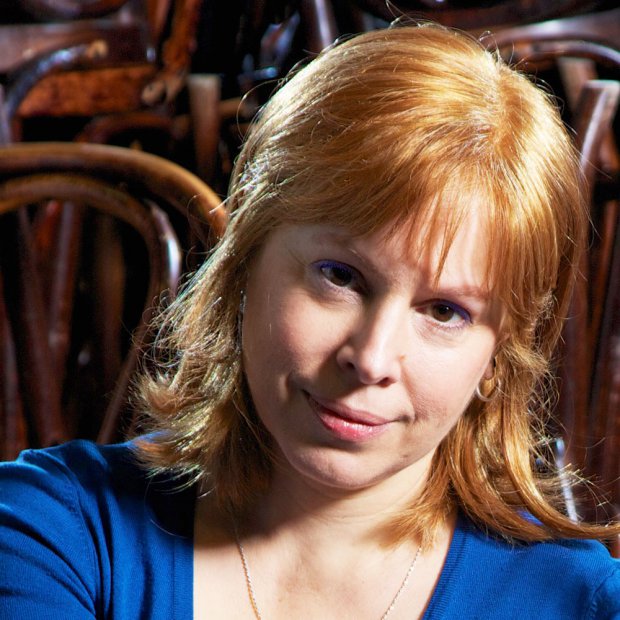 I remember one balmy summer night’s rehearsal when I was singing with Connecticut Opera. A rock band started playing in the adjacent building. I was loving the thrilling din of the combined soundscape when several singers ran hurriedly to slam the windows shut. At that moment I realised I was in the wrong place, that I wanted to make open-minded music with open-minded musicians, and make my own music too.

I moved back to New York and started going up to the library at Lincoln Center, listening to a back-catalog of contemporary music. I met more adventurous artists like Shelley Hirsch and David Shea, who were working in electro-acoustic and improvised contexts. They inspired me to find new techniques and begin using my voice in more playful ways. In free improvisation I discovered a world without limits, in which I could use my classical experience, as well as embracing a wide spectrum of vocal styles and exploring an evolving array of sounds. I first started improvising in a duo with Matthew Ostrowski, processing my voice live through an old Arp synthesizer. I went on to collaborate with many others in New York including John Zorn, Elliott Sharp, Nicolas Collins, David Linton and Fred Lonberg-Holm.

When asked about free improvisation, I often say it is in some ways similar to sport, where for spectators the story unfolds as they watch/listen. But in performance it is actually most like having a conversation: one never knows exactly what the next person is going to say, but comes up with some sort of reply. There are always times – in conversation as well as in improvisation – when the best response is silence, and to me having some space creates the most enjoyable music, for both performers and audience alike. In either case it is active listening that makes for rewarding experience. 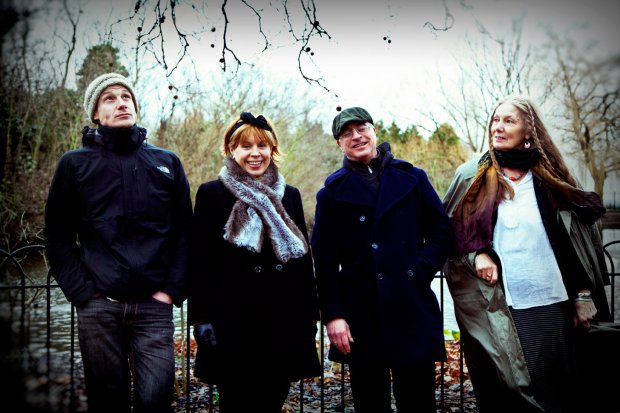 I was born in Brooklyn, to an English teacher father and Ballroom Dancer mother, both of whom participated in local theatre companies and encouraged an artistic life. I took to the stage alongside them at the ripe old age of six, singing and acting in musical theatre productions. Two years later my family made the standard move to the suburbs, and my new school had a very active music department. My first instrument was violin, and after a couple years I switched to flute, playing in school orchestra and big band, as well as singing in choir. It all gave me a solid grounding in social music-making and perhaps contributed to my rather egalitarian attitude to music in general.

I started voice lessons in my teens to overcome some acquired singing difficulties. So when my teacher identified operatic potential, at first I was thrilled. I took the challenge, concentrating on the fun, physicality, technical targets and artistic opportunities. I received scholarships to sing with the New York Oratorio Society at Carnegie Hall and then Connecticut Opera. But soon I felt constrained by the cultural boundaries of traditional opera and was drawn to music being made in the present.

When I moved back to New York I ended up working in restaurants and living in a squat to make ends meet. It was a world away from the classical music environment, but I was invigorated by the melting pot of the downtown music scene. Around this time I bought a bass guitar, taught myself how to play and began performing in several bands. I was also offered many opportunities to improvise as a bassist and vocalist, the voice being accepted as an instrument like any other, which was very nurturing. However the economic problems persisted and I often felt angered and limited by American culture.

So I seized the opportunity to go on the road with French rock group Deity Guns who I’d met through recording with Sonic Youth’s Lee Renaldo. I moved to Lyon for initial rehearsals, and then toured France, the continent and the UK. After nine months the group split and I settled in London, which seemed the obvious choice having visited family here when I was a child. I’ve never once looked back. 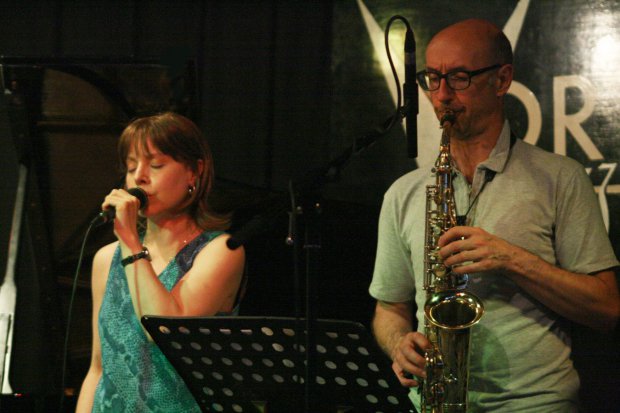 During my first few years in London I played bass guitar in several bands and eventually co-founded Electropop duo Switch, for which I wrote and sang the songs. When that project ended I felt a real pull back to using my voice in the open-armed atmosphere of free improvisation. I began performing along with electronics, processing my voice live as I sang. It was a freeing experience with so many new sounds to play with, but eventually I found myself relying too heavily on the technology, so went back to finding new ways to use my voice on its own, nowadays only using electronics occasionally. I’m so happy to have had the honour and pleasure to collaborate with many of the most creative musicians in London, putting together groups of various sizes including –

In addition to improvising, during the past decade I have continued to play a variety of music. I joined Apartment House Ensemble at Aldeburgh in a collaborative interpretation of graphical score Schumann : Entropic Song Meditations by Anton Lukoszevieze. I sang in several operas, including the role of Second Woman in a production of Dido and Aeneus and principal soprano in Veryan Weston’s The Mayfly. I’ve been part of Phil Minton’s Feral Choir in periodic appearances of conducted improvisations. I’ve performed with Resonance Radio Orchestra in radio plays including Tales of The Great Unwashed singing the Tina Turner song “Nutbush City Limits” and with Hauntological Orchestra singing tunes including Burt Bacharach’s “Anyone Who Had A Heart”. And I currently sing with Ad Libitum Chamber Choir (three concerts annually, from Medieval polyphony to contemporary commissions). 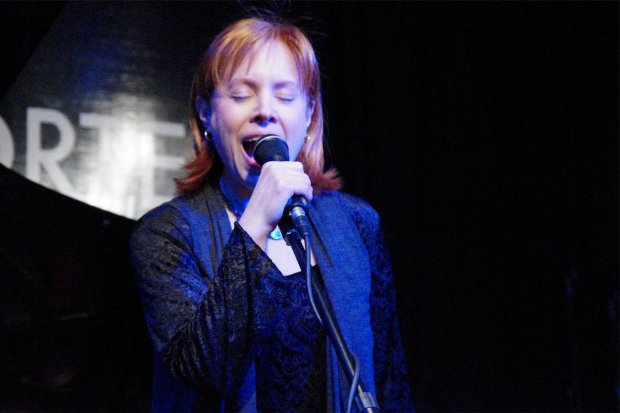 When it comes to my instrument, choosing to focus on voice was in some ways the most obvious selection, as I’ve sung since I was a child. But it was not a clear and straight path for me.

My mum grew up with two older brothers and perhaps to be heard, always forced her speaking voice as low as possible. My dad maintained that everyone should “sing from the diaphragm”, unaware that the better part of a female voice’s range naturally resonates in the head. By the time I was twelve I had less than an octave of functional notes. Rediscovering my range was an epiphany, but studying opera – a style often taught using a technique which can be harmful in the long term, relying too heavily on the muscles around the larynx for support – left me effectively stuck in one technique and unable to sound natural or even audible in the lower registers.

I finally retrained the voice properly from scratch with a most inspiring teacher here in London – Bridget de Courcy – who completely understands the anatomy of the instrument. The process took several years and a great deal of strength to complete but has given me a solid technique that can be applied to all styles.

The other thing about voice is that it is a uniquely odd instrument. It can’t be seen or touched and is extremely difficult to control technically. There is, understandably, a high level of tolerance for inconsistencies and inaccuracies in the singing voice. Yet hearing non-verbal sounds within the context of music often provokes discomfort, even while scraping and screeching in an electric guitar or sax is quite commonly accepted. As it is so closely tied to human language, a division has been historically created between the voice and other purely musical instruments, and it can be fraught with the burden of being forever assumed emotional. There is also the gender disparity – having worked as an instrumentalist I can attest to lingering sexism in music and have struggled with the expectations of being a female singer.

Despite all this, the voice is the most joyous and immediate of instruments, encouraging a strong ear and inner musicality, endlessly flexible, utterly expressive and always rewarding.

In the practice of free improvisation I seek to use the voice as a pure sound source, disconnected from the strictures of linguistic communication. Cultural prejudices see it as proper for the voice to command primary attention on stage, and this is something I strive to overcome in my performance as free improvisation is, and should be, a collaboration of equal players. My intention in the process of improvising is to have no intention. I focus on the sounds being produced around me in the moment and respond intuitively. When the focus drifts, I reengage.

I am currently working on several recordings: with Lullula (the quartet with Armorel Weston, Jim Dvorak and Guillaume Viltard), with saxophonist Nthsuks Bonga, and Double Figures – a compilation of my duos with different players.

Over the last few years I’ve been especially excited by the many byways of jazz – listening, performing and composing. Last year I sang standards with the Cyril Bass Quartet, featuring Bob Sydor on sax. I also launched a quartet playing both original pieces and structured improvisations, with Martin Speake (sax), Liam Noble (piano) and Mark Sanders / Roy Dodds (drums). The pieces treated voice and sax as equal frontline instruments, with wordless vocal lines. Going forward I am writing songs – this time with lyrics – for a new jazz quintet. I find it both challenging and liberating to approach this more traditional form with its focus on harmony and melody while drawing on the experience gained from free improvisation.

It’s not just music that has inspired me but words, science, nature, visual art, this never-boring city and so much more.

I’ve rarely met a music I haven’t liked, and I’m moved by music from many human cultures and eras. More specifically I can look at those genres with which I’ve been a bit more familiar, including musical theatre, jazz in all its incarnations, Western chamber and symphonic forms, opera and oratorio, African and rhythmic-driven music including Native American, blues, rock, punk, contemporary electronic, electropop and electronic dance.

An Interview with Kay Grant