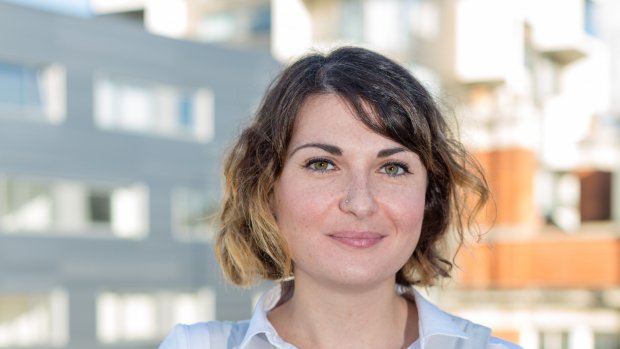 Throughout the month of March, in support of International Women's Day 2018, Sound and Music is showcasing incredibly talented women in music. Today, we recognize Soosan Lolavar.

Soosan Lolavar- ‘Being a woman composer today is an incredibly powerful thing’; Soosan Lolavar gives a thought provoking discussion about being female in the world of music.

A sound artist and educator; Soosan Lolavar specialises in both electronic and acoustic sound across a range of genres.

We spoke to her about her route into composing, the challenges she has faced as a female composer, and what it means to her to be a woman composer today:

I think if I'm honest I always wanted to be a composer, but from a young age I tacitly absorbed the belief that someone like me (a woman from a decidedly non-musical family) could never occupy that role. I completed an undergraduate in Social and Political Sciences and a masters in Musicology, and only started to move towards composition at the age of 23. I was given a place on the MMus programme at Trinity Laban and from that point onwards, gradually began to see myself more and more as an artist. I'll forever be grateful for Dominic Murcott taking a chance on me at a stage when I had almost no technical skill but a lot of creative energy. I had several other interviews in which they painfully delineated the very many reasons I wasn't good enough to study at their institution, but Trinity saw my potential and gave me a chance.

I know many female composers who will often say they have experienced no difficulties at all in their chosen field. When I hear this I often wonder: how is it possible that you and I are having such wildly different experiences? I am constantly aware of the challenges of being a female composer. I find it exhausting and want to talk about it all the time!

I have come to think, however, that many people who say that they have experienced no difficulties being a woman composer, are in fact answering a very different question, namely: has anyone ever directly told you that your work is poor quality because you're a woman? Or has anyone ever told you to stop composing and get back in the kitchen? Of course it's highly unlikely that anyone would say something like that (although recent comments by high profile male conductors about their female colleagues suggest otherwise). And if you were to ask me those kinds of questions - e.g. has someone ever directly told you that you're being a woman means your music is rubbish - I would unequivocally say no, that has never happened.

But for me, sexism in music is much more insidious, and not always about big, offensive things that are done to you. Often it's about internalised feelings of otherness that are both invisible and completely exhausting. If you are a woman and a composer you will very quickly get used to being outnumbered all of the time. Of course this situation is hugely magnified if you're a person of colour or disabled (experiences I can't speak to), but speaking as a white woman, whether it be socialising with my (mostly male) composer colleagues, teaching my (overwhelmingly male) students, or attending a research seminar with (mostly male) composer academics, I am constantly made aware of my relative otherness within my field. For me, the real problem with such an experience is that I feel it makes it more difficult for me to take risks in my creative work. I love David Bowie's description of the creative process as one in which you push yourself to the point of discomfort and fear, seeking an experience of instability in order to create something really interesting. But how easy is it to take such a position when your day to day life is characterised by low level insecurity, feelings of otherness, and the emotional toll of being constantly outnumbered by bodies that often physically outweigh your own?

Of course, women continue to make brilliant music so it's not that we are incapable of pushing ourselves into this liminal space of brave creativity. But the process of handling all these things is exhausting, and adds a huge pile of emotional labour on to the already giant load of things we have to complete in our jobs and lives.

I believe that male composers have a huge role to play in dealing with this disparity. Composers who are men, next time you're in a room full of colleagues or students, I encourage you to count the women. In fact, count the women on every programme, seminar and speaking engagement and next time you are invited to take part in something that has zero women involved, why don't you refuse and tell them why? Hell, maybe you could even give your place to a woman you know would do a great job. That would be a great start.

Being a woman composer today is an incredibly powerful thing. I think of it as along the same lines as the debate about women bishops, or any kind of female religious leader really. We still think of music as speaking to 'another world', something beyond the mundane, the earthly and the finite. Having a woman lead this process means that we are finally able to be discursive, to produce things that have legacy, to speak beyond the private sphere and to make claims to universal meaning outside of our own reality. These are opportunities that have been granted to men for a very long time and women are only just getting to the point where we can claim these rights also. As I said, we're not there yet and I think a lot of the labour of dealing with latent sexism falls on the shoulders of individual female composers, but we're certainly heading down the right path and I'm delighted to be a part of this change.