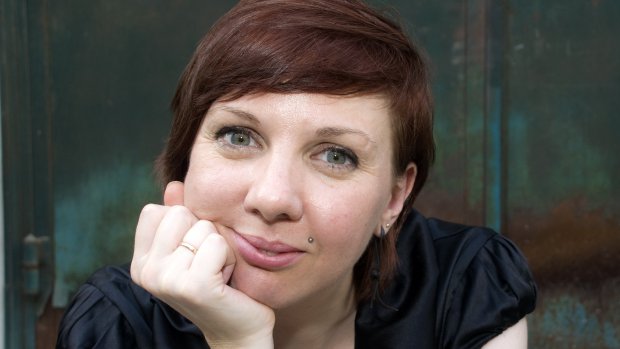 Throughout the month of March, in support of International Women's Day 2018, Sound and Music is showcasing incredibly talented women in music. Today, we recognise Amble Skuse.

Amble Skuse- ’All our work is built upon centuries of male work which we are taught; wouldn't it be interesting if there really was an opportunity to learn about women in music?’

We spoke to her about her perseverance in becoming a composer, the challenges she has faced, both as a female and battling chronic illness, and what it means to her to be a woman composer today:

My route was quite circuitous, I studied music at a young age and always wanted to be a composer, but then felt like it was too far away for a working class girl from Devon. I had no musical contacts, family, or influences, so I really had no idea how to go about it. I didn't even know that there were music schools and conservatoires. I went to Dartington College of Arts and studied Arts Management and Performance Art, and made money on the side doing Sound Engineering. After graduating I did a lot of sound work, doing festivals and orchestras and always felt like I wanted to be more creative with the sound system, but of course, that's not what you're getting paid for! So I went back to study Creative Music Technology at Bath Spa and started making electronic noises. I still focussed on the Arts Management work in terms of paid work, until I got sick with M.E. in 2007. I was pretty much stuck in bed for a few years, and could only manage an hour's work interspersed with lots of sleep. I remember thinking that maybe I would never get out of bed again, and how I always wanted to be a composer and maybe I had wasted my chance. So in the depths of this horrible illness I opened up Logic and started writing stuff, and sending it off to composition calls. I was really lucky in that the scene in Scotland opened its arms to me and I got a few chances with Red Note and Mr McFalls Chamber to get my stuff played by professional musicians. Really since then it's just been a case of keeping going. It can be really hard balancing a chronic illness with an arts practice, as you effectively have no capacity to get an income, but I've had a few lucky situations and really supportive people around me which has helped me keep afloat.

In some senses, I never really noticed when I was younger that all composers were male. I was influenced by Anne Dudley and Delia Derbyshire so it never occurred to me that women didn't make music. The places it has been difficult are in electronics and sound. As a sound engineer I only ever met two other female crew. Mainly I would be the only woman on the crew, and most days would be filled with inappropriate comments or just basic "make us a cuppa love" sexism. I sort of bantered it out and sometimes fought it depending on how it felt that day. Some people got very short shrift from me. In electronic music more recently I've heard all the sexism bingo lines, "If women were any good they'd be on the stage", "I'm not sexist, there just aren't any good female artists", "it's not our fault, women just don't apply for these courses", etc. Again this gets pretty short shrift from me. I like to flip perspective to another form of discrimination as sometimes people can be a bit blind to sexism. So if you went to an institution and after a while you noticed that they weren't teaching any Jewish composers, weren't citing any Jewish scholars and there's weren't any Jewish performing artists invited to play, you'd think there might be a problem. That's how I feel about courses which don't cite women, don't play female composers and don't invited female performances. They're perpetuating a myth, and passing it on to the next generation. It's their responsibility to get this stuff right.

To be honest, I don't think it should be a thing, unfortunately it is. We still have huge gender bias in programming. For example the Chicago Symphony and the Philadelphia Orchestra have programmed no female composers in their 18/19 programme. The stats are crazy. So we need to keep pushing, keep getting our music heard, keep being performed, commissioned, cited, etc. There are complex reasons why women face this wort of glass ceiling but until our institutions look at it and start to break down some of the barriers things aren't going to change. It's important that we've had the #MeToo campaign, and that the Oscars and Grammy's have been called out for their lack of female coverage. We need to do the same with institutions which routinely overlook female contributions to music. I sometimes wonder what women's music actually would be, if we'd had access to it. All our work is built upon centuries of male work which we are taught; wouldn't it be interesting if there really was an opportunity to learn about women in music? In fact I offered to do a class on female composers at one institution and was told "I don't think students would come as it's not really relevant to them". So if women's music isn't relevant to male students, why is male music relevant to female students? It's a crazy way of thinking about things.