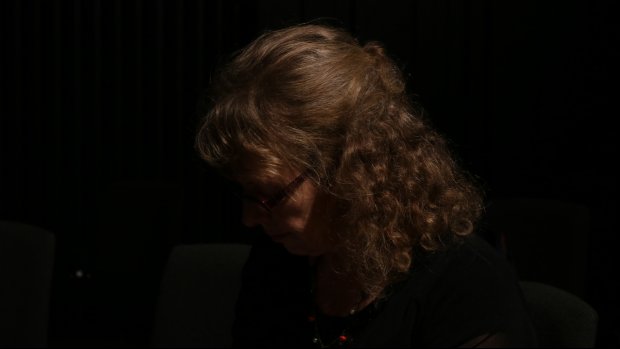 Marking the culmination of her Sound and Music’s New Voices 2018 project, we present 3 films from composer Liz Dilnot Johnson in collaboration with filmmaker Oli Clark.

Liz Dilnot Johnson’s Scintilla is an ever-evolving work, a layering of music, dance, and poetry that reflects richly on human isolation – and ways to overcome it.

To mark the culmination of her time spent on Sound and Music’s New Voices 2018 Artist Development Programme, Liz worked with filmmaker Oli Clark to produce a trio of films exploring the creative processes behind Scintilla. Here we present the first of these, accompanied by a conversation with Sam Mackay, former Creative Project Leader at Sound and Music.

Scintilla has grown and shifted shape so much since its inception. Can you take us through this transformation?

Shall I start from the beginning or the end…!

Scintilla started out as a quintet for clarinet and string quartet, where the clarinetist has five clarinets. That set up a whole lot of problems for me, in terms of how to switch between these clarinets. The solution I found was through the framework of the mindfulness of breathing, which I’d been working with to help my own mental health at the time.

It was about exploring how the mind can be calm and centred, but then, in trying to follow the breath, your mind flips or sweeps you off into some kind of fantasy or nightmare. That ‘sweeping away’ was my stimulus to change clarinet. Coming back to the breath means we’re coming back to centre, and then we sweep off to another clarinet.

I decided to centre these fantasies and nightmares around the poetry of Crag Inspector, a massive poem by David Hart, which describes experiences, sometimes phantasmagorical, of him spending time alone on Bardsey Island [located off the Welsh coast]. The character is really struggling with his mental health, and this topic is always there as the spine to Scintilla.

That piece, Sea-change, was commissioned by Ronald Woodley, an amazing clarinetist, but I kept thinking, “it’s never going to get played”, because not many people have five clarinets. I didn’t want it to be one of those pieces which just sits in the bottom drawer, as a historical footnote.

That’s when I started working with clarinetist Jack McNeill. He’d already been helping me with sketches from the outset. I said “how about if I re-write it for three clarinets?” I decided to ditch the string quartet and bring in a live electronics set-up. This becomes a very rich field for exploring material in new ways. This is something I love to do with my pieces - to re-shape things, give them new life.

I’m not a live electronics person - I did try! I’ve been working with the most fantastic digital artist, James Dooley. I helped him to shape the feel of the soundworld - whether it’s bright and energized, or strange and disturbing, a great palette of colour. Plus adding other elements like breath. That version was presented in November 2017, as a 28-minute piece in a single arch.

At this point had you already thought that Scintilla would involve choreography as well?

I always imagined Jack being on stage with a dancer. I decided to work with Dane Hurst, who is just one of those extraordinary people, extremely deep, thoughtful. I think he was interested in the long time frame, the fact that I’d been thinking about this piece since 2010.

The next thing we did was in May 2019 at the Royal Birmingham Conservatoire, where we had clarinet, live electronics and dancer. We were starting to explore different material, new ways of using the breath. That performance was all about the imagination. It uses fragments of Crag Inspector which are all quite elusive and strange. They set the imagination going in all kinds of magical ways, but it’s all quite removed from reality.

Then I got some funding from the Arts Council England to have a week’s residency with the whole team, without any particular outcome in mind. I wanted to explore ‘reality’ in this new version. I was using more folk-like or playful material, different qualities of musical feel. I was drawn to the idea of percussion, and I approached Darren Gallagher, a rising star of the percussion world.

This version also involved me performing, which revealed all sorts of really useful things to me. One is - that it’s not what I do! It’s not something I want to pursue, because I wasn’t able to fully focus on being the composer or being the director. But it was useful to have that insight into what it’s like to be a performer.

Heading off into the future, in the short term we’re going to create a live show. My current thinking is that there will be iterations of three different worlds: the imaginary world that we had in the first performance; the real world; and the third part is a digital world or virtual world. This is the next big question. We want to create things we can show on stage in a live show, a kind of VR environment. This is where I need to do a lot more thinking: I don’t know whether it’s three separate acts or scenes, or whether it gets layered up physically.

Scintilla has involved you working collaboratively with this expanding team of people. How has it been to share that creative role in new ways?

With Darren I took some risks with how I presented the material to him.  I experimented with audio scores, where I taped my own speaking voice, doubled, and sent him an audio file which he responded to as a snare drum solo.

There was another piece where I took some video of Dane’s initial sketches for the choreography and wanted to create a score based on the video, so whereas before Dane was dancing to my soundtrack, I stripped that away and looked at his movements to generate ideas from that. So it’s a kind of reflexive approach.  Keeping within the ‘crucible’ of Scintilla, but looking inside it for more riches, finding new trace elements, boring down into that.

Working as a director is something that I had never done before. Ultimately, I’m a composer. Having said that, I think there’s a lot of baggage around that term. I’ve actually invented a new term, ‘co-muser’, which I much prefer, because it opens it up. You can co-muse with other people, or by yourself. It’s musing, which feels not quite so definite as composing, i.e. positioning, placing something down, very firm and clear. So I’ve never really liked the word ‘composer’, but until people get my new word into the dictionary..!

At both the presentations, you were able to bring together audience members who had such relevant – but also varied – professional backgrounds. People with professional experience in mental health, choreographers, literature experts and so on.

It was an entirely invited audience, but I only knew about a third of them. They were people who I’d approached from different universities, nursing departments and so on. Confidence is such a difficult thing and I still struggle with it myself. You just have to take advice, I’m learning more and more to take advice. I let everyone know that there’d be a discussion, to really allow space for the audience to reflect back what they thought worked and what didn’t. Comments were offered and accepted without judgment. It was based around the Liz Lerman Critical Response Process. I think having people who I didn’t know was really useful, because they had no preconceptions, weren’t involved personally.

What I’d love to be able to do is to work as an artist, with health professionals. And use the arts more as a therapeutic tool in everyday healthcare. It’s an area that is growing all the time, which is encouraging, so I think the potential is huge. Wouldn’t it be amazing to have a national training scheme for musicians and health professionals? A normal part of the prescription process.

In the video with David there’s a fascinating exchange about humour – in Scintilla and in his poetry. Could you say more about this?

I would say that all good drama has to have lightness of touch - moments where you’re not quite sure if you should laugh or cry, or you’re laughing and something happens and twists. Or the other way around. That twisting or playing with the emotional dial, and getting the audience to feel very involved – I’m interested in finding ways to do that. In my Cello Suite, for example, it’s kind of a one-man or one-woman show, it switches from very serious and intense to very playful and comedic, sometimes from one bar to the next.

So far in Scintilla I’m not sure I’ve nailed it yet, but that’s what I’m aiming for.