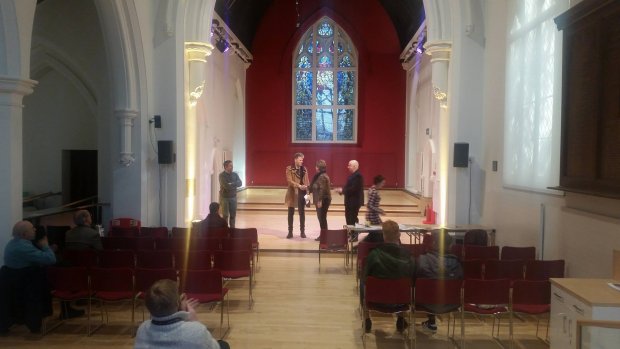 The first thing to say about my music is that you will probably like it. My interests are broad, and as a fan of music myself I never publish anything that I myself would not want to listen to. I work always under the assumption that attention is finite, valuable, and retractable at any time, and therefore expend great effort to ensure that my work is concise and interesting from the outset.

Past comments on my work, gleaned usually by loitering near audience members, have included, ‘it’s very dramatic’, ‘that was weird’, and, ‘that one was my favourite’. But don’t take their word for it—my master’s degree in composition (distinction) gained from Goldsmiths, University of London, is testament to the quality of my work. I like to go big, and deploy all means at my disposal to extract emotional reactions from listeners.

My path to semi-professional composer has been an arduous one. I came to music very late in life, and, with a healthy dose of vengeance for the fact that I was born into circumstances that meant a complete absence of access to music instruction, managed to claw my way first into a music access course and eventually complete my master’s degree by way of an undergraduate degree at Canterbury Christ Church University.

This I have achieved largely under my own direction and while having to work both full- and part-time to support myself while my peers were able to dedicate all of their time to their studies. Despite entering my degree programme with among the lowest entry grades (I did not study music at GCSE level and had scarcely two years of instrumental practice to my name), I graduated with: first-class honours and the highest overall final grade of my cohort, the highest dissertation mark, highest composition mark, and was awarded the university’s Maxwell Davies Memorial Award for Competition upon graduation in 2017.

Though ostensibly affording me ‘disadvantaged’ status, my working-class background and the unconventional path I have taken into my career of choice are my strengths. I became accustomed to having to work harder than my peers from the outset of my studies, and as a result of having to direct my own learning at every stage, my learning curve for acquiring necessary new skills is shallow indeed. My determination is borne partly of a stubborn need to increase the representation of people of my ilk who possess the desire and capability to work in music but without the means or opportunities.

I developed an interest in form early on in my music studies that has shaped all of my subsequent work. Immersion in the universe of New Complexity as a Goldsmiths student took this beyond a mere interest, and the thrusters of my development were really switched on following engagement with the concept of parametric counterpoint absorbed from my brief encounters with, and heavy-handed interpretations of, Brian Ferneyhough’s music (though in a heavy, heavily diluted and listener-friendly form).

Elsewhere, I have repurposed the pan-intervallic compositional techniques found in Elliot Carter’s music, and developed an interest in the concept of liminality following postgraduate research into the origins of so-called Spectral music. The stochastic and probabilistic techniques of the other Goldsmiths patron saint, Iannis Xenakis, have found their way into my music and form the basis of much of both my electronic and graphic work. My piano compositions remain largely accessible, constrained as they are by the requirement for me to write things I am able to play.

Though primarily a pianist, my compositions span a range of instrumentations and mediums. My current focus is a set of six piano works that I will perform and record myself, though my past works have been performed by the Maggini Quartet, Ensemble L’imaginaire, Luis Tabeunca, and Martin Outram. My mentors throughout my time as a student composer have included Dr Lauren Redhead, Dr Sam Bailey, Dr Panos Ghikas, Dr Stamatia Statherou, professors Keith Potter and Roger Redgate, and Paul Clark of the Clod Ensemble. In 2021, I was granted the opportunity to attend rehearsals with the London Sinfonietta and used the opportunity to make connections and gain feedback on my work.