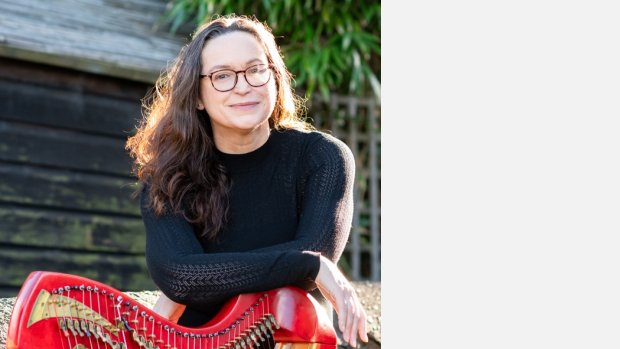 Karen Marshalsay is one of the few players exploring all three Scottish harps, (wire, gut and brays) and has appeared throughout the UK, Europe, America and Australia. Coming from the folk world of workshops, and lessons from top players including Alison Kinnaird she now performs as a soloist, with The Cathal McConnell Trio, and composes for harps, and for other instruments and ensembles.

As a composer Karen has produced works for Celtic Connections’ New Voices, Hands up for Trad’s Distil showcases (including performances by Mr McFall’s Chamber),  Drake Music Scotland, and Harps Northwest (Composer-in-residence, 2016). In 2018 and 2019 she guested with the acclaimed Russian String Orchestra, conducted by Misha Rachlevsky, playing her own compositions and orchestrations. Karen’s solo album, The Road to Kennacraig, (July 2019) shows her to be “a fine composer of tunes in a living tradition”.

Karen’s music is varied, with a strong foundation in her own Scottish traditions, especially pibroch, but also influenced by working with African, Indian and Paraguayan musicians and on multi-cultural projects including Yatra, (Edinburgh Mela commission, 2008). She is particularly interested in exploring narrative melody and traditional-style phrasing with ensembles and  string orchestras, and taking harp, an ancient instrument,  into contemporary soundscapes