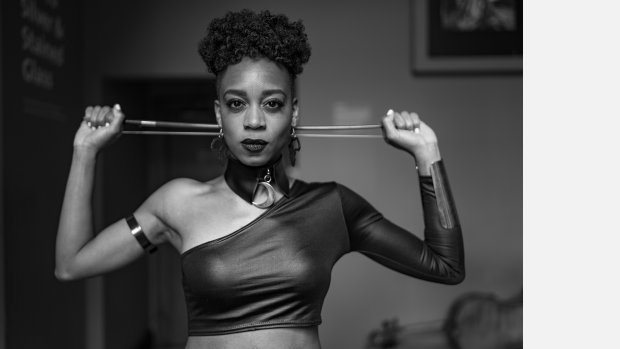 Ayanna Witter-Johnson is a multi-talented singer, songwriter, pianist and cellist. She has a phenomenal mastery for seamlessly crossing the boundaries of classical, jazz, reggae, soul and R&B, to imprint her unique musical signature with her virtuosic tap, strum and bow with her cello into her sound and vibe.

"As a second-generation Jamaican born in Britain, my music is a body of work that represents, celebrates and pays homage to my ancestral heritage, culture and identity," explains Ayanna.

An acclaimed and celebrated performer, Ayanna has collaborated with many stellar artists, including Anoushka Shankar, Nitin Sawhney, Andrea Bocelli and Jools Holland. She has also toured extensively across the UK, Europe and the US.

After graduating with a first-class degree from Trinity Laban Conservatoire of Music and Dance and the Manhattan School of Music, Ayanna participated in the London Symphony Orchestra's Panufnik Young Composers Scheme. Soon after, as Emerging Artist in Residence at London's Southbank Centre, Ayanna performed as a featured artist with Courtney Pine's Afropeans: Jazz Warriors. Later, whilst studying in the USA at New York's Manhattan School of Music, she became the only non-American to win 'Amateur Night Live at the legendary Apollo Theatre in Harlem, NYC.

With her January 2021 surprise-released EP 'Rise Up, Ayanna again combined reggae, classical, jazz and R&B to celebrate black culture and identity to uplift and inspire the next generation. The stunning collection of three tracks and videos featuring Akala on 'Rise Up', Cleveland Watkiss on 'Declaration Of Rights' and the 'Rise Up Riddim' have received a huge amount of critical acclaim.

Ayanna said, 'In 'Rise Up', I created a song with a strong message specifically influenced by my Jamaican heritage. The starting point was a dancehall riddim that informed the main cello riff. Lyrically, I challenged myself to create something uplifting with an uplifting message, and it just flowed. I wrote the song for the next generation in the black community to remember they are the key to the future. To celebrate their culture and to be proud of it. Now is not the time to give up on your dreams. No matter how hard things seem, Rise Up, embrace our history and claim our birth rights of freedom and joy."

Despite the challenges of 2020, Ayanna took it all in her stride and continued to create music. She performed a special Livestream for Royal Albert Hall, took part in Trinity Laban's Virtual Orchestra and picked up an AIM Award nomination for 'Best Live Act'. In addition, she presented two shows at Wigmore Hall, appeared on BBC Radio 3's 'This Classical Life' podcast, co-wrote and featured on Anoushka Shankar's Grammy single 'Those Words' from the Grammy-nominated Love Letters EP. Ayanna also collaborated with and featured on Nitin Sawhney's stunning single 'Movement Variation II' taken from his acclaimed recent album 'Immigrants'.

2021 has been a stellar year for Ayanna. She is currently working on her sophomore album, collaborating with Solem Quartet as part of their Beethoven Bartok Now series. She has had her song 'Draw the Line', commissioned by The Hermes Experiment, featured on their sophomore album 'Songs'. Ayanna has also featured on a track called 'Flow My Tears' with John Aram, the arranger for Phil Collins. The song is a slick, modern-day reimagining of English composer John Dowland's 400-year-old music. She is currently working on several commissions for ensembles and orchestras, including a Royal Philharmonic Society Commission for the Philharmonia Ensemble; Ayanna is also adding commissions for film, a feature-length documentary and TV programmes.

2021 also saw Ayanna returning to the live stage, headlining at London's iconic Jazz Café and Kings Place. She also made additional performances supporting Nubiyan Twist on their UK tour, participating in 'Jazz Voice' (the opening of the London Jazz Festival) at the Royal Festival Hall and a 22-date US tour with Opera superstar Andrea Bocelli.

As a performer of extraordinary versatility, Ayanna's live shows are intimate journeys that chronicle her experience as a female artist in the 21st century. Due to her musical prowess, mesmerising vocals, non-compromising lyrics, and ability to deftly reinterpret songs on the cello.

Ayanna Witter Johnson is the very definition of eclectic soul.