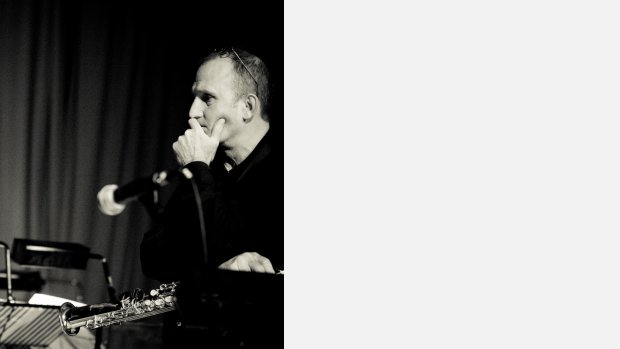 Kevin comes from Lowell, Mass. USA. After dropping out of high school (whoops), He settled in the UK in the early 80’s and worked on the London jazz and pop scene; playing, touring, and recording with various rock and pop  artists, as well as  West African High Life and Salsa groups. He gradually shifted primarily to jazz, playing with his own group and the Tommy Chase Quartet at festivals in the UK such as Glastonbury, Brecon, Edinburgh, Glasgow, and Brighton and festivals in Europe in Milan, Paris, Poland, Portugal, Sweden and the North Sea Jazz Festival. He has been working with David Gordon, putting out two CD’s, Riprap and Snow-Blue Night, working both with poets in commissions from the TS Eliot Festival and other events, and as an instrumental quartet playing around the usual venues.
After  graduating from Goldsmiths University, his focus turned to contemporary composition,  an he went on to gain a post graduate degree in composition from Anglia Ruskin with Richard Hoadley, and  later gained a PhD in composition at the University of Sussex with Martin Butler.  He has had works commissioned by the SPNM and others performed by orchestras and ensembles in London and Cambridge. Apart from continuing as a performer,  he is pursuing a number of collaborations with poets, dancers and painters. He has currently just worked on a series of Arts Council sponsored ambient installations for the artist Jane Perryman which have toured galleries in Sweden, the US, Scotland, Wales, England and India. His most recent project is the Peddars Way Project, funded by the PRS Foundation Music Creators Fund.  Stapleford Granary  appointed Kevin Artist-in-Residence for 2020, where he was to organize a number of collaborations based on the nature reserve of the Gog Magog Trust in Stapleford.