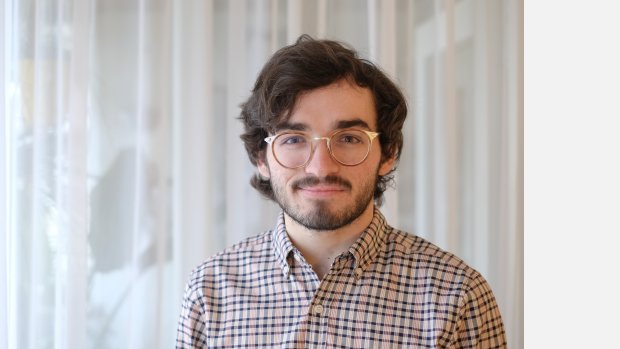 The music of composer Conrad Asman (b. 1996) has gained international recognition as being
“innovative and cutting edge” (Chorosynthesis) and spans a wide emotional range from
“heart-rending” (The Esoterics), to “fun and festive” (Creative Feel). His works have been performed
in Africa, Asia, Europe and America in venues such as Carnegie Hall, the Nelson Mandela
Metropolitan University and the Jinji Lake Concert Arena. Engagements with ensembles such as the
Shanghai Philharmonic Orchestra, the Esoterics singers, the CHROMA ensemble and the Cape
Town Youth Choir have led to his work winning multiple major awards, scholarships and
commissions worldwide.

Conrad Asman grew up in Johannesburg, South Africa where his early interest in composition
began to show in parallel to taking piano lessons. He began studying at the South African College of
Music in 2015 where, as the youngest undergraduate participant, he won the Cone of Composition
competition. His first major orchestral piece Igniting Kites & Flying Fireworks received multiple
performances by KwaZulu-Natal and Cape Town Philharmonic Orchestras, and went on to claim
both the Jan Royce Foundation and Priaulx Rainier prizes, as well as second place in the New York
Metropolitan Youth Orchestra composition competition.

These opportunities led to Asman’s works receiving international attention. He made his Carnegie
Hall début with the Cape Town Youth Choir with his work On a Night, which went on to win the
Stefans Grové National Choral Composition Competition. Asman was recognised as the Polyphonos
Young Composer award laureate in 2017, which sparked a new commission for The Esoterics choral
ensemble in Seattle. In 2018, Asman was named as the main winner of the SAMRO Overseas
Scholarship; enabling him to pursue further compositional engagements abroad.
Asman’s more recent work involved being selected as a finalist for the Thailand International
Composition Festival and went on to be named the joint winner of the Jinji Lake Composition
Competition in China. Following this competition, Asman was then commissioned by the Shanghai
Conservatory of Music to compose a new work for the Shanghai Philharmonic Orchestra as part of
its annual Listening to China project. In 2020, he wrote two new orchestral art songs for the iSing!
Music Festival, one of which was named one of the Grand Winner of the festival’s international
composition competition.

Conrad lives and works in London. He recently worked with the Royal Scottish National Orchestra
during their 2020/21 Composers Hub scheme with Stuart McRae and Roxanna Panufnik. He is
currently pursuing a Doctoral degree in music at the Royal Academy of Music, and is currenting
working on a new opera, an upcoming orchestral work for the London Philharmonic Orchestra and
chamber music for members of the Riot and Nash Ensembles.