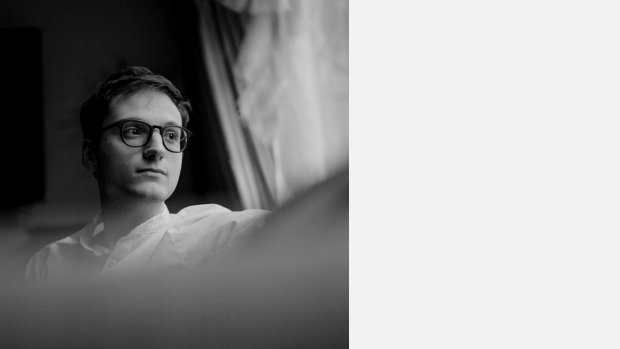 Euchar Gravina (b. 1994) is a composer from Malta based in London. His output ranges from pieces for soloists and chamber ensembles to electronic music, choral works and orchestral compositions.

Recent commissions and projects include a set of three orchestral pieces with electronics for the Malta Philharmonic Orchestra, a chamber orchestra work for Aldeburgh Festival, a touring opera for children for Teatru Malta (in collaboration with Three Palaces Festival), an interactive dance-theatre piece for Valletta 2018 (European Capital City of Culture) and a concerto for Teatru Manoel and the Valletta International Baroque Festival. Performances of his music have also been given by Christ Church Cathedral Choir (Oxford), Psappha Ensemble, Chroma and mezzo-soprano Marvic Monreal. Upcoming projects include a work for violin and orchestra, a piece for the Carducci String Quartet as well as a piano-percussion duo for George Barton and Siwan Rhys.​

The recipient of the special jury prize at the APS National Composition Competition (2015) with Stabat Mater, Euchar was the composer-in-residence with the young ensembles at Sage Gateshead (2017/18). He is currently a Britten Pears Young Artist (2019/20), ahead of performances at Aldeburgh Festival 2020/1, and has also been awarded a place on the Peter Reynolds Composition Studio 2020/1, as part of the Vale of Glamorgan Festival. His choral work ‘Soneto XIII’, in memory of journalist Daphne Caruana Galizia, has received multiple performances in the UK and his score to the documentary ‘Children of the Underground’ has travelled between museums in Malta and the Netherlands.​

Euchar is the Artistic Director at Waterloo Festival, an annual festival in the heart of London which brings together artists, musicians and the local neighbourhood, and has been recently appointed Artistic Director at St John's Waterloo ahead of a redevelopment project which will transform the venue into a more accessible and inclusive hub for arts and the community.​

Following studies in piano and organ, Euchar read composition at the Royal Academy of Music (London) with Simon Bainbridge and Edmund Finnis and participated in masterclasses and lessons with Oliver Knussen, Bent Sørensen, Magnus Lindberg and Judith Weir, amongst others. At the Academy, Euchar also took classes in choral conducting with Patrick Russill.

When not composing, Euchar directs community choirs in Waterloo and Southwark and teaches piano. He also sings tenor with the London Symphony Chorus.​

Euchar has been generously supported by the Janatha Stubbs Foundation, the BOV Joseph Calleja Foundation and is a recipient of Arts Scholarship, financed by the Government of Malta.