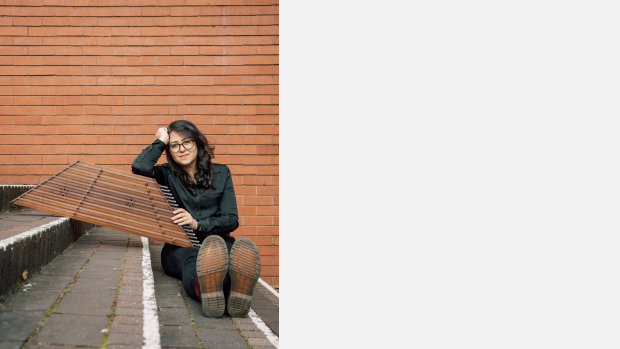 Atefeh Einali currently resides in Manchester, UK. She has completed her master’s degree in composition at the University of Manchester. As graduate of the Art University of Tehran, she is also an active Santoor player and she has performed in the UK, Netherlands and Iran. She has also worked closely with performers, composers and lecturers, with various commissions such as the Psappha Composing for Sitar scheme and currently the International Guitar Foundation (IGF). Recently her creative process of her composition portrayed within the online edition of Audiograft - Oxford's annual festival of experimental music and sound art. Beside of that festival her piece "I am from nowhere" and the process of her composition released by Toward sounds online exhibition and Deutschlandfunk radio in Berlin, Germany. Currently she has been collaborating with ARC project to compose a piece for Flute and Harp and also she has been facilitating online workshops called "Music and Colours" for Rainbow Haven organisation who work for refugees. ​

Her research interests include the musical possibilities of combining traditional Persian musical practices with Western contemporary musical practices considering musical parameters such as pitch, rhythm and timbre. Also, she was one of the winners in SIMF (ACIMIC= The Association of Iranian Contemporary Music Composers) competition in France in November 2018. Moreover, her pieces have been performed by Jae-Won in Zutphen, the Netherlands in Bach festival, Alternance Ensemble in France, Trio Atem ensemble, Danel quartet and Eskandari quartet and Psappha ensemble at the University of Manchester. She also has been a co-composer in “Circle messages” album with Dr Melanie Chilianis from Melbourne, Australia, based on the merging of Eastern and Western intervals. In addition, one of her pieces has been chosen for publication in volume 23 of Women and music: A Journal of Gender and Culture (WAM Journal), the USA. Now, a unique collaboration (Avazad fusion ensemble  ) is formed by her and Eliorah Goodman. She has performed in Avazad fusion ensemble on numerous occasions; programming a combination of traditional music alongside experimental compositions they have created themselves. From formal performances at the Cosmo Rodewald Concert Hall and the Lighthouse Theatre in Liverpool, Manchester people history museum, to informal concerts held at Burnage library or at Hillel House in Manchester, they have also organised, and participated in numerous events. Some examples are; a performance on the occasion of Holocaust Memorial Day, the Jewish Purim festival, fundraising for refugees, and facilitating musical activities with the University of Manchester Interfaith society.