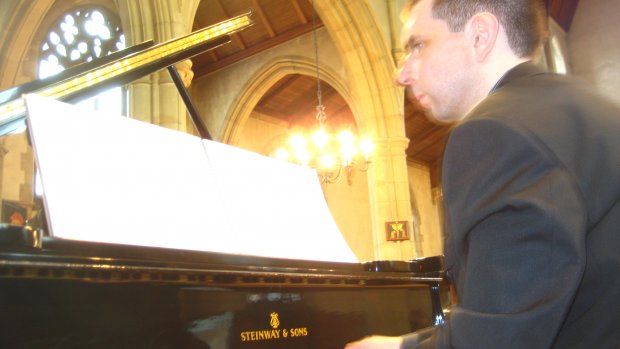 Steve Law is a composer with a unique musical voice and gift for memorable melodies. His music fuses together pop and jazz influences with classical music in an expressive and accessible style.

Steve was born in London and is a self-taught pianist from a young age, performing concertos by Gershwin and Prokofiev and composing and performing a piano sonata whilst at school. He studied music at Bristol University with Raymond Warren and Wyndham Thomas and received a Master's degree in composition for his jazzy 3 act opera ‘Heaven on Earth’ (1998) which was described as ‘a significant contribution to the genre’.

Steve is also a gifted and meticulous transcriber of piano recordings. He is a published arranger of Dudley Moore’s album 'Songs Without Words' with Faber. Steve was invited to meet Dudley in London in 1999 after dedicating a solo piano transcription of Dudley’s music from the film ‘Bedazzled’. Steve’s many arrangements for musicians such as Rena Fruchter, Jack Gibbons and the late BBC Broadcaster Geoffrey Stern have been performed in the UK and America.