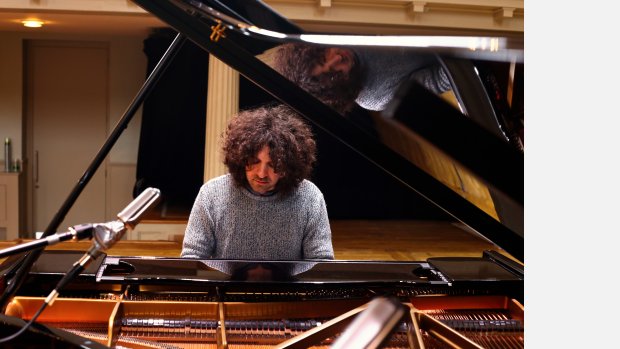 Daniel Inzani is a composer, international touring pianist and producer based in Stroud, Gloucestershire. Throughout his career he has played a wide variety of styles, his principal musical focus is now instrumental contemporary chamber music. He also records and produces the majority of his own works using a specialised location recording studio.

‘This is cinematic music of a high calibre, executed with eloquent musicianship.’Songlines Magazine review of ‘BEA’ by Spindle Ensemble (4 stars)

‘Bea is a masterful piece of work filled with musical innovation and pastoral aspiration performed by musicians at the top of their game. All in all a perfect demonstration of exciting and modern classical music.’Line of Best Fit review of ‘BEA’, by Spindle Ensemble

Daniel’s composition work is now primarily with the chamber quartet Spindle Ensemble. The compositions been described most accurately as Neo-Impressionist, that is contemporary classical chamber music influenced by the Impressionist era in Paris championed by Maurice Ravel and Claude Debussy. Daniel’s compositions are also heavily influenced by the community of musicians from the Bristol based experimental music collective Bloom which he has collaborated with since 2010, as well as music pioneers such as Moondog, Charles Mingus, Mulatu Astatke and Jonny Greenwood.

Daniel also leads and composes for an 8 piece group named Tezeta who combine Ethiopian jazz, world fusion, cinematic prog and group improvisation. He also composes for and performs as a solo pianist, as well as scoring pieces for string quartets.

Recently Daniel has started focusing on composing music for visual art. He has started scoring music for short films and been involved with various audiovisual collaborations, commissioned by local theatre companies, art centres and film festivals.

Daniel tours internationally with grammy nominated country soul queen Yola and rocksteady group Count Bobo. This is in addition to his solo piano performances and concerts with his groups Spindle Ensemble and Tezeta.

In addition to work with the above musical artists, Daniel has performed world wide with theatre and circus productions including an Australian tour of ‘Bianco’ with No Fit State Circus, performances at Mayfest with Contact Gonzo (Japanese physical theatre group) and being musical director of the closing ceremony for Sanctum (Theaster Gates) .

Daniel records and produce his own music using a specialised location recording studio which he take to churches to capture 3D immersive sound images of live chamber music. The mobile setup consists predominately of ribbon microphones, combined with high definition digital capturing which is then mixed, produced and mastered at his home studio.

His recordings, compositions and performances have received critical acclaim in various respected music publications and been played on various radio stations including BBC 1, 2, 3 and 6.

Daniel has been a keen collaborator with visual artists since 2016. In 2021 he was a runner up in the Cameraless Film Competition by On8Mil and the David Lynch foundation. His entry was an animated music video for my group Tezeta, created by scratching, painting and applying inks directly onto 16mm film with post digital editing. 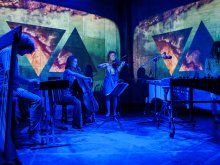