Alice Boyd is a London and Bristol based composer, theatre maker and environmental campaigner. Her work uses the voice, everyday sounds and electronic textures to tell stories about the world around us. She has been selected as one of Sound and Music’s New Voices composers for 2020, supported by Arts Council England, the Garfield Weston Foundation and the PRS Foundation.

Alice is interested in the intersection between climate change and the arts, and the power that theatre, film and audio have to communicate big issues. In August 2020, ‘Germination’, an audio piece in collaboration with nonfiction writer Laura Grace Simpkins, was selected for Louder Than The Storm’s climate intersectionality exhibition. Alice’s sound design in ‘Crisis’ was shortlisted for #CreateCOP25, a competition for the UN’s COP25 Climate Conference in Madrid in 2019.

As co-artistic director of Alan and Ron, a new climate comedy duo, she took their foley show, ‘Two Super Super Hot Men’ to VAULT Festival 2020. She is also a company member of Poltergeist and is currently involved in their show ‘Art Heist’ as a composer, sound designer and theatre maker. The show went to Latitude Festival, Underbelly at Edinburgh Fringe Festival and New Diorama Theatre.

In 2019, she founded Staging Change an artist-led organisation, which aims to improve the environmental sustainability of the theatre and performance industry. Their network of theatre makers, venues and organisations now includes over 300 members, including Pleasance, Underbelly and National Theatre Wales. 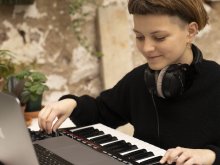