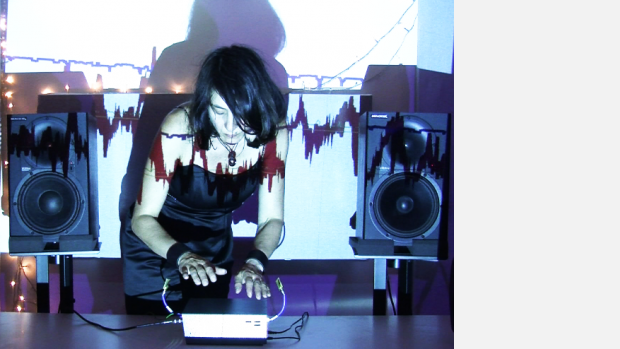 xname is the digital identity of media artist, performer and composer Eleonora Oreggia, originally from Milan and currently based in London. She creates performances and interactive installations using light, sound, dust and self-made sensor-driven synthesizers. Her music features elements of techno, ambient drone and industrial. Eleonora is the creator of REBUS, a musical instrument officially launched in 2020 that senses changes in the electromagnetic field it generates, the first compositional tool that radically innovates the Theremin technique. In 2013 she has been selected by the Barbican to represent the artist Marchel Duchamp in the digital era. Her artworks, consisting of audiovisual pieces, software, sculptures, interactive installations and live performances, have received several prizes and awards and have been consistently shown in institutes, museums, galleries and festivals over Europe, UK, Asia and America – and over the Net. A Design alumna from renown Dutch post-academic institute Jan van Eyck Academie, Eleonora has also obtained an MPhil in Cultural Studies from Goldsmiths College, a PhD in Media & Arts Technology from Queen Mary University, and a Laurea (summa cum Laude) in DAMS (Drama, Art and Music Studies) from University of Bologna, IT. She is the founder of Nebularosa Records – a label promoting music and musicians who challenge established production practices.