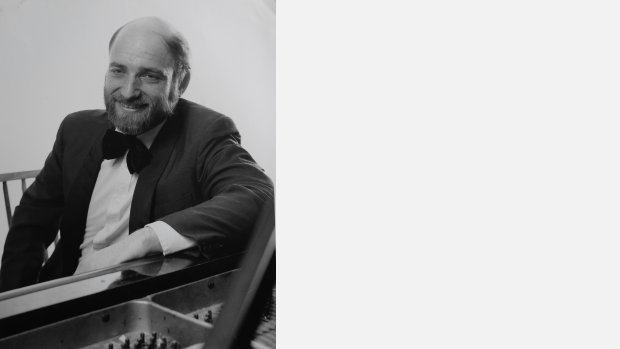 Robert Bouffler died in 1987, a few months before his 40th birthday.  Born in 1948, an only child and adopted by a couple in New South Wales, he excelled as a student in sciences as well as music.  He learned the piano at age 9 and broadcast on radio at age 11.  He won a scholarship to the Sydney Conservatory where he again excelled.  In 1968 he came to London to study for a Master’s degree at King’s College and over the next 10 years his musical life blossomed.  He studied contemporary music at Oxford and took part in piano master-classes with leading musicians including Daniel Barenboim, and made his Wigmore Hall debut in 1975.  The late 1970s saw his fame spreading with concert tours in USA, Canada and Australia. He made several records and was recorded for TV and radio in many countries.

From his home in Dairy Cottage, Caterham, he taught piano to beginners and advanced students, and taught for the Open University and the Royal Academy of Music.  He was music director of Croydon Opera Group for many years, and composed several works that are held in the library of the Sydney Conservatory.  He was well known for his vast range of his repertoire from the Renaissance to the Avant-Garde, but perhaps he was best known as a totalling engaging, extremely modest and generous man, with a sharp intellect.  His friends and pupils enjoyed his enthusiastic support, and it is so fitting that thanks to his legacy, twenty-seven years after his tragically early death, young musicians can continue to enjoy his support