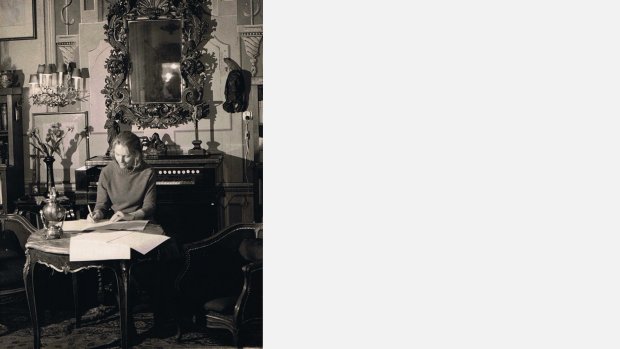 Geraldine Mucha was born in London on the 5th July 1917. She was fortunate to belong to a family with a strong musical background. The precocious Mucha was able to read music long before she could read words. She was encouraged to compose by her father, Marcus Thomson, who was a professor of singing at the Royal Academy of Music, and given lessons in harmony by his colleague, the composer Benjamin Dale.

Later she was introduced to Sir Arnold Bax, who showed a keen interest in her ability. Mucha gained a place to study composition and conducting at the Royal Academy of Music. She was also taught by the composers Alan Bush and William Alwyn, who is said to have remarked, "that girl has so much talent you don't know if she's got a brain or not."

Her first ballet ‘Nausicaa’ was shown to Constant Lambert, conductor for Sadler's Wells Ballet, who was, "impressed, but sceptical that a woman could have written it." When the war began in 1939 Mucha was able to compose incidental music for an anti-fascist play, which was well received, and to make musical arrangements for the BBC. In 1941, Mucha met a young man in French uniform in Leamington Spa. He turned out to be the writer and war correspondent, Jiří Mucha, son of the famous Czech Art Nouveau painter, Alphonse Mucha.

The couple returned to Prague in the autumn of 1945. Rafael Kubelik, the conductor, was a neighbour and soon became a good friend. Mucha became involved in helping with the first Prague Spring Festival. She gave suppers after the concerts and her guests included such notable musicians as Leonard Bernstein, David Oistrakh and Yehudi Menuhin.

In 1950 Jiří was imprisoned by the Communists because he had been employed by the BBC during the war. In order to help their finances Mucha worked for a music publisher as an editor and translator, and she managed to write her own music too, "in order to keep me sane." As a member of the Czechoslovak Composers Union, Mucha was given access to orchestral performances. Although these were infrequent, she was able to hear her piano concerto, suites, and overtures played by orchestras such as the Czech Philharmonic and the conductor, Karel Sejna. The piano concerto and a suite from the ballet Macbeth were also recorded and issued by Supraphon.

She wrote many works for a broad range of small ensembles, amongst them nonets, string quartets, a sonata for violin and piano, a wind trio, a piano trio, duos, and a wide variety of vocal pieces and songs. She was particularly fond of the "brilliant colours of the woodwinds’’. In the early seventies she wrote several pieces for the soprano, Jill Gomez, some of which were broadcast by the BBC.

Mucha continued to work regularly at her compositions, and respected Czech soloists asked her to write small pieces for them. Mucha died on the 12th October 2012. Only two weeks earlier she had attended a special concert of some of her orchestral music given in honour of her 95th birthday.

"Geraldine Mucha is a many-sided and expressive composer. Her music is full of feeling and colour..." - Andreas Sebastian Weiser, Music Director of the State Opera, Prague