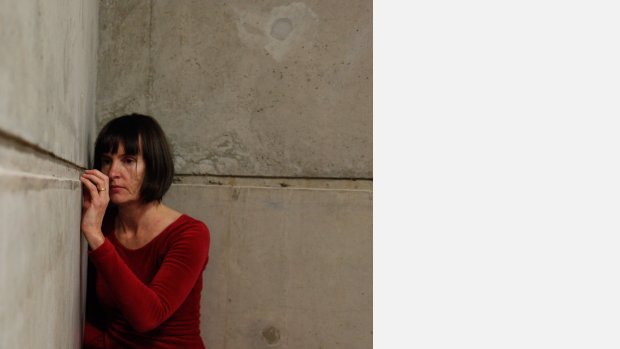 Isabel is an experienced collaborator, soundartist, singer/composer and director of Salamanda Tandem UK, (est 1989) and has brought together many performance, sound, movement, visual and sensory artists from all over the world, to make art works that cross boundaries between people and art forms to celebrate and cultivate human creativity.

“I'm a product of a complicated childhood, from an eccentric, poor and disabled family that will keep me in stories and art work for life - all that makes me pretty inventive I suppose. Although a classical musician, and dancer by training, my passion is the human voice as an instrument; sung, spoken, extended, audio description; all this is my sound art. The air I breathe in and breathe out is fundamental to all that, and thus a dialogue with nature, the environment and others is central to my creative process.  A self employed artist for 32 years, I suppose that pretty much makes me unemployable, and its just as well I’ve never been tempted for a moment to go for a proper job!

What was my journey?

Well right back in the mid and late 70’s when I was a young musician and composition student, I had cultivated in me a keen eye for inequality. I’d grown up with it as my father was blind and then later deafblind, he was Welsh and a good singer, who experienced music through; vibration, texture, and his local mid welsh community, but I’d seen first hand how unfair the world was and how he was excluded from it. In my late teens, I played in the wonderful Gretel Schmidt ensemble, for 3 years alongside some great players like Stephen Smith who founded the Smith Quartet. Gretel taught us how to play without a conductor, and we loved the level of concentration and engagement required for that. But she was unique, and it wasn’t like that in other playing situations. Instinctively I began to notice hierarchy and sexism, I could see the frustration of my fellow female musicians, as we all sat under the male baton. These were times of abuse and oppression for women in music, I experienced it, and as we played, the music seemed almost at arms length as our energies were dominated by batting away unwarranted attention, or coping with inequality. I shared a desk with a bright female composer, we weren’t fools, but we didn’t have confidence and knew if we tried to be artists we’d never get respect from those men, at best we’d write scores that were never played, for audiences that never came, but we’d never get to direct our own work which was my dream.

Later I realized that the schism wasn’t just about being a woman in a man’s world where we were objectified and belittled, I knew too that it would be easy for me to use the classical form or process I’d got used to myself, and it would exclude others too, certainly my dad. With note books, diary’s, conversations, my sony professional, my voice and fellow collaborators I began cultivating a state of critical reflexivity. In any case I was drawn to long term projects and sustained artistic relationships, I was interested creatively in vulnerable others, in co-composing music with fellow singers over the kitchen table, making art with my family, in crossing art forms, making and touring larger scale site specific works, and concepts developed in groups who might become participatory audience. I threw myself into it, flat out for 3.5 decades! from 1987 – 2022. In looking back at my work, through the 90’s and at the turn of the 21st century, I can see the struggle others had with my identity; what it is she? ‘community musician’ or ‘educator’ or ‘therapist’ or ‘composer’ or ’choreographer’. I was all those but in different spheres, the perception is that real art stuff surely happens somewhere else with different people, as it did in the old days?

Again a schism, the ‘high art’ world we’d been trained for, however imperialistic, or fossilized, was still something I wanted to be part of, but disabled people, women and or other excluded people are still on the periphery and devalued as we were 40 years ago.

I felt inspired to create something different and I set out on a distinct collaborative journey born out of lived experience, and together with disabled artists and other collaborators to bring ethics and aesthetics side by side.

I wanted to develop persuasive processes that put people, at the centre of something living and breathing; I wanted to have free reign to create and direct my own art. First stop, I gave up my previous interests in theatres, recital rooms, concert halls, in fact anything proscenium, and dived instead into site specific work. My first site specific collaboration happened back in 1988, where by chance I got caught up in saving a beautiful hot spring in Oregon from dynamite; it involved spending 2 days in cold water, then steaming hot water and then brown mud!

I’ve made a host of other live soundart and movement artworks since, for environments such as industrial sites, woodlands, mangroves, formal gardens, landmark buildings, waterfalls, ruins, chapels, museums, caves, cathedrals, hot springs, lead mines, a weir, canal, river, and in public and domestic spaces such as local parks, ponds, city high streets, squares, living rooms, a supermarket, school playground, shop window, bathroom, an orangery, in a kitchen dresser, on stairways, a library or two, under a table, in a revolving door, and many adult daycare centres, prisons, hospital wards, and in more formal situations like the usual museums, gallery’s, and studio’s.

The emergence of soundart is something, we have all created and it is our opportunity!

I am currently directing a series of 7 Soundwalks across my home county of Nottinghamshire, building upon a 4 year project Soundwalks Into Wellbeing directed by Isabel and now with arts council england, to respond to the new Covid -19 environment and increased levels of isolation for vulnerable people and carers. This project, is soundart for recovery, developing with social worker / tabla player Biant Singh.

In 2014 - 2017 I developed Salamanda Tandem’s White Cane an idea that arose from the death of my father Lewis Jones, and inheriting his long white cane.

Recent other work includes projects in Japan, Norway and Estonia where I worked as a curator, composer and director, to bring 28 countries across Europe to devise a series of performance works with VI dancers & musicians pioneering audio description as a soundart form.

All photographs by kind permission of: Geoffrey Fielding

Yog an expanding universe In sound
Original Music and Film

30 Years of Salamanda Tandem White Cane and Soundwalk Into Wellbeing.pdf 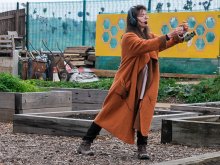 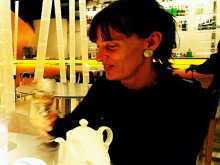