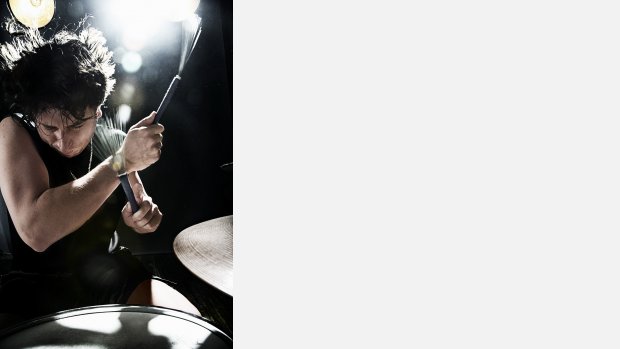 A drummer and composer whose music enthusiastically defies category, Sean Noonan prefers the title “Rhythmic Storyteller” – an apt description for a modern-day sonic griot who spins imaginative yarns in the ancient tradition of wandering minstrels while weaving captivating narrative tapestries via his unique polyrhythmic language.  His compositions portray discoveries from a "wandering folk" theory where he spans the globe collecting and adapting stories, legends and folklore of diverse cultural traditions.

Conlon Nancarrow declared: “Time is the last frontier of music”. I am interested in further developing Nancarrow's numerous temporal experiments and the manipulation of time perception in contemporary performance practice as a composition technique.  I am a composer, improviser, and percussionist, performing and conducting my work from behind the drum kit. My music is informed by an eclectic variety of influences, including collected tone rows (e.g. Alban Berg), harmolodic jazz (Marc Ribot, Jamaaladeen Tacuma), aleatoric comprovisation (John Zorn, John Cage), Krautrock (Malcolm Mooney, CAN) and Malian griot traditions (Abdoulaye Diabaté).

In 1999 I received a Bachelor in Music Education at Berklee College of Music. During my studies I worked at the Old School House Theater on Sanibel Island, Florida, backing legendary Hollywood songstress Marni Nixon. While on tour in Italy in 2003 I was in a near-fatal car wreck and during my long period of recovery and rehabilitation I discovered the multi-temporal music of Conlon Nancarrow. His ideas subsequently became integral to my compositional style. A 2006 commission from the American Composers Forum led to formulating the "wandering folk" theory where I span the globe collecting and adapting  folklore of diverse cultural traditions. During this period of travel and research between 2006 and 2011 I created 5 albums as the Afro-Celtic world music project Brewed by Noon.

In 2011 I earned a Masters Degree in Composition from the Aaron Copland Music School which resulted in the release of A Gambler’s Hand, a suite of pieces for amplified string quartet and drums, largely composed but with improvisational sections (third stream uniting jazz and classical forms and approaches), inspired equally by the great string quartet tradition (Beethoven and Bartok in particular).

I have published over 120 works which have been reviewed, broadcasted and heard by thousands of listeners in over 15 countries, with hundreds of performances in diverse venues and international festivals. In 2016 I was commissioned by the Sant'anna Arresi Jazz Festival to write the 90 minute Zappantion Rock Opera, where the artistic director asked me to dedicate a work to Frank Zappa and Edgar Varese. My discography includes 24 diverse albums such as the 2019 Rarenoise Records release Tan Man's Hat which fuses free funk pre-rap beat poetry by Malcolm Mooney of CAN and Jamaaladeen Tacuma from Ornette Coleman's Primetime.

With his latest project, Drumavox, Noonan once again bridges past and future with his trademark combination of musical exploration, offbeat humor, and eclectic vision. The “sonic griot” melds ancient traditions and folk tales with experimental techniques and irreverent songwriting in a whirlwind of folk and avant-jazz, offbeat rock and vocal harmonies.  Bringing together Noonan’s drumset majestry with a virtuosic and fearless Sardinian vocal quartet, Drumavox comprises the earliest musical instruments in the human arsenal – voice and percussion – in ways that our evolutionary ancestors could never have anticipated – and that will even surprise the most fluid of contemporary listeners.  Gorgeous and playful, provocative and soulful, traditional and adventurous. Drumavox pairs contrasts as startlingly and harmoniously as it pairs percussion and voice.

Anatomical Planes, is the latest edition to my chamber music series featuring the Ligeti Quartet which continues to explore concepts from A Gambler’s Hand (2012) and In the Ring (2014).  Anatomical Planes is a future album release consisting of five suites which employ polytemporal concepts from Conlon Nancarrow's Studies for Player Piano: Study No. 5 (two repeating ostinatos at tempos of 5-against-7) Study No. 11 (an isorhythmic blues on a repeating sequence of 120 chords) and Study No. 20, (a pointillist duration canon of repeating notes within small ranges).

Polytemporal music is composed using two or more different simultaneous tempos or speeds. Henry Cowell first envisioned polytemporal theories of divisive rhythm in his treatise New Musical Resources (1919), discovering a way to structure rhythmic duration in a similar way that had been achieved with harmony, that pitch intervals, and polyrhythms are manifestations of the same phenomenon, differentiated only by speed. This became the main inspiration for Conlon Nancarrow's 50 Studies for Player Piano (1948-92) which synthesized the two main conventions in which rhythm is composed (divisive or additive approaches).