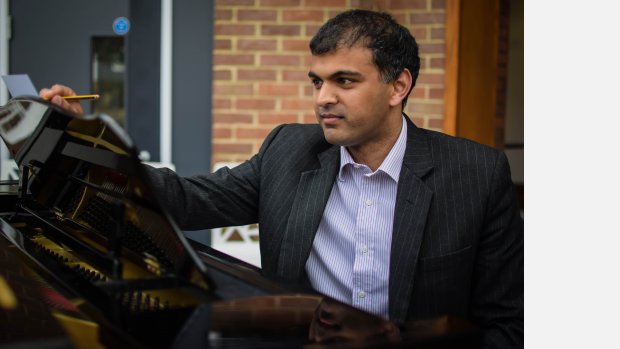 I am a British composer. My classical works have been broadcast on BBC Radio 3: “O Sacrum Convivium” in 2017, “In Paradisum” from Requiem in Blue in 2018, “Father, forgive them” and “Maida Vale Service” in 2021. “O Sacrum Convivium” and “In Paradisum” can be found on my album “Marvellous Light“. The BBC Singers gave the world première performance of “Father, forgive them” on March 30th. Soon after this stunningly beautiful performance, I composed “Maida Vale Service” for them – a new setting of the evening canticles.

My forthcoming composition “BEGIN” – written for voices, piano and string quartet – is strongly influenced by film music. It is a setting of five quotations by Rumi: the 13th-century Persian poet and mystic. His writings are extremely popular in western Europe and the United States. The quotations I have chosen are particularly mindful in nature. This large work is likely to be finished in the summer (2021).

From as far back as I can recall, I have had a deep emotional connection with music. I am lucky enough to have parents who nurtured my musical side. My mother played the piano to me from the very beginning and I had my first serious introduction to regular performance as a chorister at St Mary-le-Tower church in Ipswich when I was six years old. This experience was such an important part of my musical training, as the challenging repertoire we attempted rivalled many cathedral choirs at the time. After this solid foundation, provided by John Cooper, I was awarded a music scholarship to Ipswich School, where I achieved grade 8 in piano, voice and French horn. I started composing during my GCSEs, during which time I wrote a fugue in C minor.

I then read economics at the University of Nottingham and sang in various choirs, including the selective Viva Voce chamber choir and a barbershop quartet. During my last few months at university, I had some jazz piano lessons with Alex Wilson. This led to a reawakening, as I could now code music very productively using chord symbols. I could also play most pieces I knew by ear, and improvise around them with the tools I had learned, that I subsequently developed on my own.

After my masters degree in economics, I returned to Ipswich on a gap year. I began singing at St Mary-le-Tower church again, this time under Michael Nicholas. I also joined a chamber choir and a madrigal singing group. Given my new understanding of music through jazz theory, I was seeing and hearing music differently. It was during the dark months of late 2006, when five women were murdered in Ipswich, I started to write choral music. My first two efforts were “O Lorde, the maker of al thinge” and “O sacrum convivium“. I showed these pieces to various people, including my current and previous choir masters. They offered me useful compositional advice and I have not stopped composing since.

Given my somewhat unusual path to composition, I believe my style is very different to most contemporary composers of a more traditional route. In particular, my love of jazz harmony, minimalism and film music yields some fresh textures. I am inspired by many, including: Francis Poulenc, Olivier Messiaen, Alexander Scriabin, John Tavener, Arvo Pärt, John Coltrane, Bill Evans, Hans Zimmer and John Williams.

I started a distance learning PhD in Composition (specialising in choral composition) at the University of Aberdeen in September 2019, with Dr Phillip Cooke as my primary supervisor.