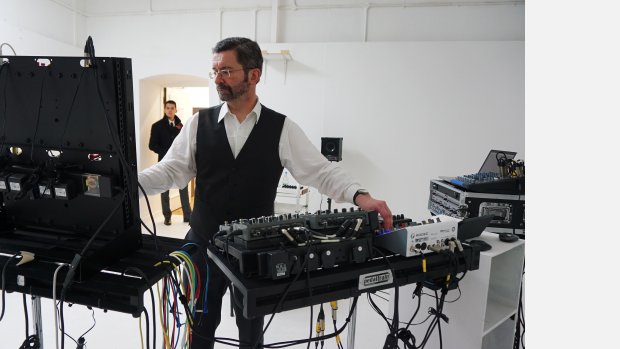 John Harvey is a practitioner and historian of sound art and visual art. He is Professor of Art at the School of Art, Aberystwyth University. His research field is the sonic and visual culture of religion. In art practice, he deploys electroacoustic methodology and technology to explore the aural sources of Protestant Christianity, as well as theological, biblical, and cultural ideas, and systemic processes. The work is discussed in The Aural Bible series of CD releases (2015, 2016, 2019, 2021), and The Pictorial Bible series of exhibitions (2001, 2007, 2015). The Aural Bible series is released by, and available from, the National Screen & Sound Archive of Wales. Other sound works can be heard at: sound.johnharvey.org.uk.

In art history, his studies engage the visual imagery of popular piety, supernaturalist traditions, and working-class culture. He has written a number of books including The Bible as Visual Culture (2013); Photography & Spirit (2007); The Appearance of Evil: Apparitions of Spirits in Wales (2003); Image of the Invisible: The Visualization of Religion in the Welsh Nonconformist Tradition (1999); and The Art of Piety: The Visual Culture of Welsh Nonconformity (1995). A full profile of his releases, exhibitions, and publications can be accessed at aber.academia.edu/JohnHarvey.