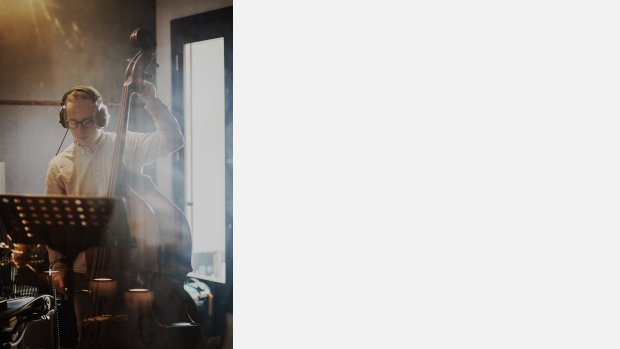 James Banner was born in Dudley, England and is now based in Berlin and the UK, working around Europe as a musician, composer and educator. His main project James Banner’s USINE has been described as “revelling in both avant-garde and swing”, “unobvious and unpredictable” as well as “intense and dramatic… gentle and beautiful… full of drama”, and has received support from both the Berlin State and Initiative Musik. As a composer he received the prestigious Elsa Neumann Stipendium in 2018 from the Berlin University of the Arts/HfM Hanns Eisler, supporting the ambitious project Voices of Berlin, interviewing residents of Berlin and reflecting their stories through music for improvising choir and ensemble. James has been featured in portraits by Der Tagesspiegel and Deutschlandfunk Kultur, and was recently selected to be a part of Making Music’s Adopt A Composer scheme, composing the collaborative piece Concertino For Concert Band with premiere performances in late 2019 and  a BBC Radio 3 broadcast in 2020. James is a visiting Lecturer at Leeds College of Music, composer in residence for Make The Paint Dance, and workshop leader for Jazzlines at Symphony Hall Birmingham, and active as a co-leader and sideman in projects in the jazz and improvised music scenes of Berlin, also regularly being selected to take part in collaborative projects further afield such as Fish and Chips at Leipziger Jazztage 2018 and Jazz Alloy at the Vortex, London. He also co-curates the monthly residency Practically Married at Berlin’s Donau115, voted one of Europe’s best jazz clubs by The Guardian.