British composer writing for concert, recordings, multi-media and film. Music to ‘touch the heart and inspire the soul’. Performed and broadcast internationally.

Rosemary Duxbury´s music has been described as ´a special brand of minimalism in a profound spiritual context´ (Anthony Pither, former Director of Music, University of Leicester) and is consistently reviewed as being beautiful, dream-like, pure and powerful. She describes her initial source of inspiration as being "from within: a place where 'streams' of 'inner sound' and 'inner light' can be accessed."

Growing up in Quorn, Leicestershire, Rosemary Duxbury studied piano with composer John Brydson and concert pianist Marlene Fleet, and was a violinist in the Leicestershire Schools´ Symphony Orchestra under Eric Pinkett and Peter Fletcher. She completed a BA in Music and Inter-Arts at Bretton Hall College, Leeds University and postgraduate violin studies with Celia Davies CBE and has an MA (Distinction) from Chichester University in Professional Media Composition.

Her classical work includes compositions for piano, chamber groups, orchestra, choir and songs. Her music is performed around the UK, Europe, in America, and has been broadcast on Classic FM, BBC Midlands Radio, in Canada and regularly in America.

Other collaborations include work with poets (notably Jay Ramsay, Marion Fawlk, Denise Fast), with British Composer award-winning video artist Kathy Hinde, has had music choreographed for dance, for ice-skating by former world professional ice skating champion Lorna Brown and used in theatre (by Swiss director Roelof Overmeer). Rosemary collaborates with photographer, Annette Horn and their work has been presented at the Meistersingerhalle, Nuremberg and to packed audiences at the historic Reitstadl Hall in Neumarkt, Germany.

Rosemary´s instrumental music is recorded on four albums by the Charasound label:

"Streams" features her piano music and a piece for string orchestra and harp (played by the Italian orchestra Sinfonica Aosta, conducted by Emmanuel Siffert (principal conductor of the San Juan Symphony Orchestra, Argentina).

"Mirrors of Light” features piano music performed by Patricia Siffert recorded at the award winning Potton Hall studio in Suffolk, England, and launched with concerts at the University of Leicester and at Gloucester Cathedral.

Her choral work includes "Angel Whisper" recorded and premiered by the Kingfisher Chorale (Conductor David Fisher) and given its Canadian premiere by Vox Luminosa (conductor Claudel Callender) and broadcast on American radio.

Her recent vocal work, "Kabir Says..." has been recorded by mezzo soprano Bhawani Moennsad and pianist Symeon Ioannidis at the Berlin State Opera House Rooms, and its World Premiere was given by soprano Katerina Mina and pianist Andrea Benecke in London on 25 February 2016 followed by a German premiere at the Steinway-Haus in Munich on 26 February. Rosemary has also just completed a choral version of this piece.

Her latest composition is "Touch of Love" for solo violin and orchestra, recently recorded by the City of Prague Philharmonic Orchestra, conducted by Nic Raine at the Smecky Recording Studios. 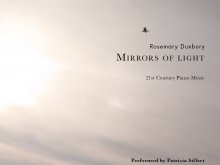