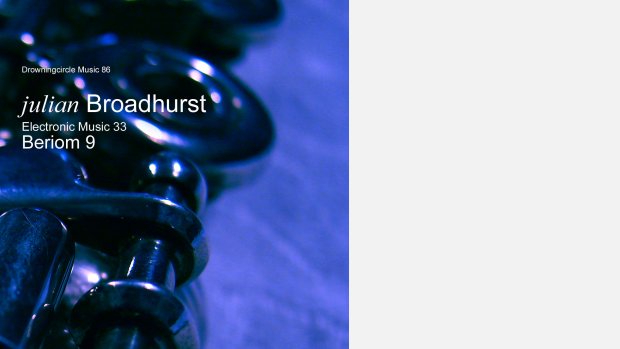 After a recital at the University of Derby - a man in the audience offered me the use of his recording studio, and my first two albums [as Perpetuum Mobile] - Art gave over to music. 'Now in a time of music' - as it had always meant to be. In short order I set up my own recording facilities, imaginatively titled the 'Drum studio' - later upgraded to the 'Isabel Studio' - where I spend hundreds of hours experimenting, recording, mastering - then isuing recordings over five areas of research interest or Tranches - now always as Julian Broadhurst.

These are 'Drum music', Dm for short - percussion with all manner of Drums - as a speciality. Secondly - 'Metal Percussion music'. MPm - percussion on anything other than drums, - metal objects, bells, gongs et - wood - stare wells et al.Percussion as a generality. Thirdly - 'Phase music', Phm - music from interplacing Tape loops. Fourthly Music for Strings, Electronics and Percussion' or MSEP - basically as it says but with the addition of various orchestral instruments. Acustic and Electro-acoustic works. Lastly - Electronic music - rather - music most highly transformed, electronically, from its acoustic source - I never used synthetic instruments - only the studio .

All these areas began to bleed into each other as I developed but the basic areas and there associated series of album releases are a fair guide to content. All the releases - of my own work and that of my Collaborations are on my own label DCM - Drowningcircle music - after Drowningcircle - my publishing Company for my Art. All the recordings are available to hear in full or download for a modest fee on my main Bandcamp Grid - containing my own 134 albums and links to the pages for all my collaborations - if you have a spare lifetime. All my own works have a central catalogue - Prefixed Rh - shortened from recording (number) modelled after my Art Catalogue CW [or 'Canonical Works']. As an Artist I 'wrote black line for String quartet' - now as a composer 'I write String Quartet for Black line'.

I Have two areas of Collaboration - [ geographical as well as in time - as I moved outwards from a starting point as it were]. Firstly - those formed in an intense early period of working in the Leister underground - of project electronics and Secondly, in later International projects.

It all begins with 'Tetlow and Broadhurst' having just met multi instrumentalist Jim Tetlow - at a very Early stage of my work.Then up to his eightieth album with Licester Underground leaders 'Endgame'. I pushed him well out of his comfort zone with my concept of music making - pushing toward to the Contemporary, Avant Garde - where years later I firmly landed. This was the start of all that followed at almost the beginning of my own studio work - we were a house on fire ! I cherish the 19 albums with him. for the experience, for the freedom and the potential it gave me. We still occasionally record and some of our recordings are important in my life's work - 'OBAH' - just for one example.

In 2009 Jim and I met the Cellist David Dhonau with whome I formed another seminal duo [Seminal to me that is] - 'D'juil' IDa-Xule]. He was fresh from the Classical trio 'Accortumn', and allowed me to cloak ourselves in that aura. we We had made by 2019 - 25 often multi disc albums - though all aspects of the contemporary cello from pure Classicism to multi tracked Ensemble work with Percussion and electronics et al. I can't over estimate the value of these works to me as a composer. 'Bebop' our thirteenth album - a Concerto for Cello and Metal Percussion' and our eighteenth album 'Belladonna' for Four Cellos [that Cello Genius Pr. Neil Heyde praised] are two examples you might wish to hear.

Other Collabs are 'Anderson Morning' [with flautist - vocalist Maureen Anderson]: 'OLArJ' [with Polish Flautist - Vocalist Ola Szmidt - project pronounced: Olaje - Ola & J with a deliberate small 'r' instead of an '&']: 'Etuda' [a two album Collab with Choreographer Joanna Geldard]; 'Lords of the dance' [with percussionist Walt Shaw]; 'Alician' [ wirh Harpist Alison Katy]: 'Hudersfield Impromtu' and 'Sonn Yaa' [with Composer -ViolinistSonya Grossner]. All these projects can be found on my main 'julian Broadhurst' album grid at Bandcamp - my composer website..

I Left the melting pot of Leicester UK - close to my home - for a first International collaboration - with the wonderful German Wind Virtuoso Markus Wenninger with, whome I would form multi album duo 'Wenninger Broadhurst' after an initial single album as a Trio 'JJM' with Croatian Composer Jurica Jelic. You can find links to all our works together on the international collaboration site we founded JJM [after the trio - Jurica, Julian, Markus - hear our album 'Breeze' [all from my central Bandcamp grid]. There was a brief post JJM project with Jurica and Marcus Beuter as Anjelic [our album Angel is worth a listen -find it on the JJM site] but my main direction for me was Wenninger Broadhurst. This gave me his wealth of experience as an internationally important wind specialist - catapulting WB into that stratosphere. As a composer it has been mind-bending to work with him. My last International Collab is with Serbian Pianist Marina Vesic with whom I currently have 5 albums as 'Konnyek'. Where I go from here I don't yet know.

As a Composer I have just been asked by by the British Library to prepare an Edition of my Complete works to date - updating thenafter for the National Collection, an honour for me and Musicology Doctorate Tom Hewitt has just published his PhD study on my work.