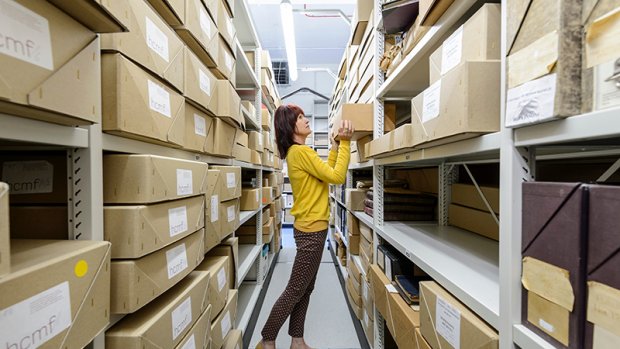 About Heritage Quay and the British Music Collection

About Heritage Quay and the British Music Collection

Alongside this website the British Music Collection also includes a large number of physical items which can be found at Heritage Quay in Huddersfield.  From 2012 - 2017 £2million of funding from the Heritage Lottery Fund, alongside funding from the University of Huddersfield, was invested in the creation of this information, records management and archive service. The British Music Collection is now one of many archive collections it now maintains.

The physical collection contains over 60,000 scores and recordings of 20th and 21st century British music – alongside hundreds of composer information files – most of which originate from the British Music Information Centre (Find out more about the history of the archive here).

The majority of the collection relates to post-1960 and contemporary music, but also encompasses works from the late 19th century onwards. The collection of scores and recordings contains both published and unpublished works, and includes high-profile composers, such as Britten, Tippett, Birtwistle, Maxwell Davies, Cardew, Harvey, Weir, MacMillan, Turnage, Tate and Adès, as well as emerging composers and less well-known musicians.

The sound recordings in the collection include both commercial and private recordings donated by publishers and composers, recordings of concerts and events that took place at the British Music Information Centre and other related music organisations (e.g. the Society for the Promotion of New Music), and recordings of BBC Radio 3 broadcasts. The recordings are stored on a variety of formats, including VHS tapes, Betamax tapes, vinyl records, audio cassettes, CDs and DVDs. There are also a very small number of reel to reel audio tapes and DAT tapes.

Whilst the online Collection is expanding digitally, only Sound and Music’s New Voices may add works to the physical collection.  However the Heritage Quay team is still interested in acquiring composers’ archives alongside the Collection – please contact the team to find out more.

Much of the Collection is covered by copyright and other rights legislation, limiting online publication or streaming.  However Heritage Quay offers an enquiries service, and is open to all visitors on Mondays and Tuesdays, 9:30 – 17:00, where you are free to access the material yourself.  Special Study Days are regularly organised to give researchers deeper access to the collection and meet other users.