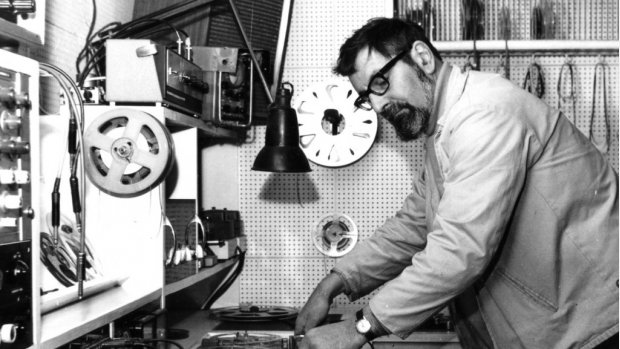 Tristram Cary was born at Oxford on the 14th May 1925, the third child of Joyce Cary, the novelist, and Gertrude Margaret Cary (nee Ogilvie). Cary was educated at Dragon School, Oxford; Westminster School, London (King's Scholar); Christ Church, Oxford (Exhibitioner) and Trinity College of Music, London. He served with the Royal Navy from 1943–6 (interrupting education) specialising in radar and thus receiving training in electronics. During his war service Cary independently developed the idea of what was to become tape music, and began experimenting as soon as he was released from the Navy in late 1946.

He took a BA at Oxford, then studied composition, piano, horn, viola and conducting in London. While a student he augmented his grant by evening class teaching. From 1951–54 he was occupied with starting a family, writing music, and teaching, while holding a part–time job in a gramophone shop and developing his first electronic music studio. From 1954 he was gradually able to live by score commissions, and gave up most teaching and other employment.

He was the founder (in 1967) of the electronic music studio at the Royal College of Music, and designer/builder of his own electronic music facility, one of the longest established private studios in the world. Beginning in Marylebone, it went to Earls Court, then Chelsea and eventually to Fressingfield, Suffolk. The equipment from this studio was brought to Australia, and most of it was incorporated into the expanding teaching studio at Adelaide University. Cary was also a founder Director of EMS ( London) Ltd. and co–designer of the VCS3 (Putney) Synthesiser and other EMS products.

In 1986 Cary left the University to resume self–employment. Operating as Tristram Cary Creative Music Services, he combined a specialised personal studio with the facilities available to him at the University. In the late 1980s, he wrote a major book on music technology, published in 1992 by Faber and Faber as the Illustrated Compendium of Musical Technology. The American version, substituting Dictionary for Compendium, is distributed by Greenwood Press, Connecticut.

Apart from composing, Cary continued to lecture and broadcast regularly. He also undertook some higher degree supervision and examining. The University of Adelaide awarded him the position of Honorary Visiting Research Fellow, in which capacity he is continued his computer music research until his last year. Cary was a citizen of both Australia and Britain, and in 1991 he was awarded the Medal of the Order of Australia for services to Australian music. In 1999 he received the SA Great Music Award for the year, and in 2001 he gained the degree of Doctor of Music at Adelaide University.