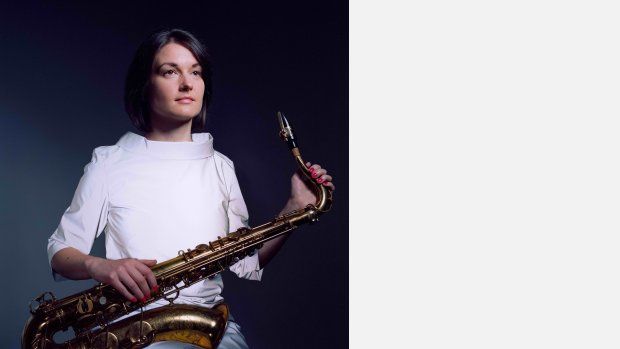 Trish Clowes is a saxophonist and composer based in London. Her third album for Basho Records – ‘Pocket Compass’ – has been described as “melding of the unexpected and inexorable” (BBC Music Magazine), demonstrating “exquisite control of instrumental colour” (The Arts Desk) and “a strong contender for album of the year” (Jazz Views). It features her Tangent Quintet with Gwilym Simcock (piano), Chris Montague (guitar), Calum Gourlay (bass) and James Maddren (drums).  Three tracks also feature the BBC Concert Orchestra. ‘Pocket Compass’ was launched at the EFG London Jazz Festival 2014 alongside the premiere of her first BBC commission “The Fox the Parakeet & The Chestnut”, an event which was the culmination of her two years as a BBC Radio 3 New Generation Artist. Clowes’ commission also won the ‘Contemporary Jazz Composition’ category of the 2015 BASCA British Composer Awards.

Clowes’ debut album ‘Tangent’ (Basho Records, 2010) received praise for its integrity, luminosity and ambition. Two tracks feature an orchestra conducted by Jules Buckley of The Heritage Orchestra. On her second album, ‘and in the night-time she is there’, Clowes worked with a string quartet lead by Thomas Gould and with guest vocalist Kathleen Willison.

Following the success of her debut album and 2010 tour, Trish was selected by Jamie Cullum, Gilles Peterson and Jez Nelson to perform on the BBC Introducing stage at Cheltenham Jazz Festival 2011. The performance and a short interview with Trish were broadcast on BBC Radio 3. Tangent were featured during the Proms Plus Late series at the Royal Albert Hall and supported Regina Carter at the London Jazz Festival 2011. In 2012 she appeared at the London Jazz Festival playing the music of Barbara Thompson and featured on BBC Radio 3’s Jazz on 3 at Ronnie Scott’s and for Jazz Line Up at the Royal Festival Hall.

In May 2012, Trish curated her own cross-genre festival “Emulsion” with funding from the PRS for Music Foundation, featuring ECM artist Iain Ballamy. Four new commissions were premiered alongside existing music from Ballamy, Tangent, Rory Simmons’ Fringe Magnetic and contemporary classical group Ensemble Amorpha (MD Luke Styles, Glyndebourne Young Composer in Residence). Emulsion returned for a third time in May 2014 with a two day festival at Village Underground in London, headlined by ECM artists Food. Parts of the festival were broadcast by BBC Radio 3 on Here and Now and Jazz On 3. In July 2015, the Emulsion Sinfonietta performed with Food at the Cheltenham Music Festival and plans are in place to develop the Emulsion concept further in 2016.

Clowes’ star continues to be firmly in the ascendant. In November 2013, she performed with Gwilym Simcock and Michael Wollny in a special concert at Pizza Express Jazz Club as part of the EFG London Jazz Festival. In January 2014, she participated in Celtic Connections, with the BBC Scottish Symphony Orchestra, in the live premiere of her composition Sketch, also broadcast on BBC Radio 3. She successfully toured in support of the Pocket Compass album in February 2015 and made her first appearance at Wigmore Hall in May 2015 in an exciting collaboration with Gwilym Simcock and the Heath Quartet. Clowes made her television debut on BBC 2 for BBC Proms Extra in August 2015, performing her own “Little Tune”.

Other projects include a new trio with pianist/organist Ross Stanley and guitarist Chris Montague and Under Your Wing, a song based ensemble featuring Norma Winstone and Mike Walker. The trio recently featured in a concert and broadcast for Radio Bremen and are due to record and tour in 2016.