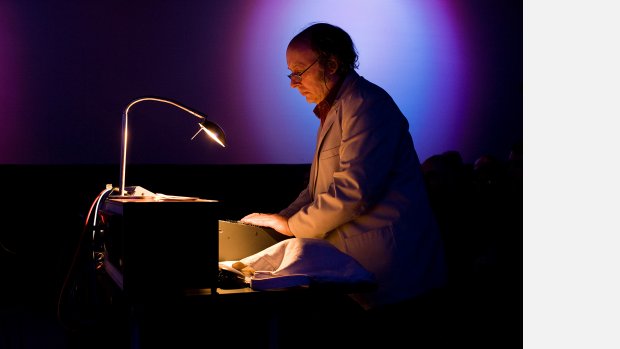 TREVOR WISHART: (b 1946) Composer/performer from the North of England specialising in sound metamorphosis, and constructing the software to make it possible (Sound Loom / CDP). He has lived and worked as composer-in-residence in Australia, Canada, Germany, Holland, Sweden, and the USA.

He creates music with his own voice, for professional groups, or in imaginary worlds conjured up in the studio. His aesthetic and technical ideas are described in the books On Sonic Art, Audible Design and Sound Composition (2012), and he isd a principal author of the Composers Desktop Project sound-processing software. His most well-known works include The VOX Cycle, Red Bird, Tongues Of Fire, Two Women, Imago and Globalalia, and pieces have been commissioned by the Paris Biennale, Massachussets Council for the Arts and Humanities, the DAAD in Berlin, the French Ministry of Culture and the BBC Proms. In 2008 he was awarded the Giga-Herz Grand prize for his life’s work. Between 2006 and 2010 he was composer-in-residence in the North East of England (based at Durham University) creating the sound-surround Digital Opera Encounters in the Republic of Heaven, and during 2011, as Artist in Residence at the University of Oxford, began work on the project The Secret resonance of Things, transforming astronomical and mathematical data into musical material.

He has also been involved in community, environmental and educational projects, and his Sounds Fun books of musical games was republished in Japanese.