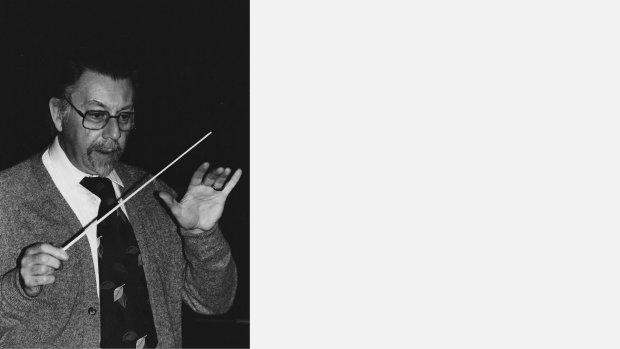 Thomas McLelland-Young was born on the 9th September 1937 in Catford, South London. His father was a chemist and his mother a singer and entertainer. They later moved to East Ham, where he was a chorister at the parish church of St Mary Magdalene.

Tom won a scholarship to Trinity College of Music where he studied composition with Arnold Cooke and organ with John Webster. His remarkable talent for improvisation on both the organ and piano was probably honed by working as a pub pianist during his student days.

For most of his working life he was a repetiteur at the Royal Ballet School. He held a succession of appointments as Organist and Director of Music at St Phillip’s, Battersea, St Leonard’s, Streatham (1970-94), St Augustine’s, Tooting (1994-97) and All Saints, Warlingham (1997-2007) and for ten years was conductor of the Sutton Symphony Orchestra (1992-2002).

It was during his 24 years at St Leonard’s, Streatham, that he composed much of his sacred music. In 1975 the church was gutted by fire and subsequently rebuilt. The two manual, tracker-action Walker organ, installed in 1979, was built to Tom’s specification.

The London 20 Chamber Orchestra, the Essex Symphony Orchestra and the Royal Ballet School all commissioned music from him. He won the City of Trieste Prize for Symphonic Composition with his Viola Concerto (1971) and the Richmond Arts Council Prize with his String Quartet (1976).

His later life was marred by three tragedies. In 1996 he suffered a spinal problem which left him confined to a wheelchair - although he continued playing the organ, skilfully adapting the pedal parts to be played on the manuals. His wife Jill died suddenly in 2000 and his son Michael seven years later.

Tom retired to St Leonards on Sea in 2007, where he found an outlet for his abilities at the Unitarian church in Hastings with its newly rebuilt Snetzler organ.