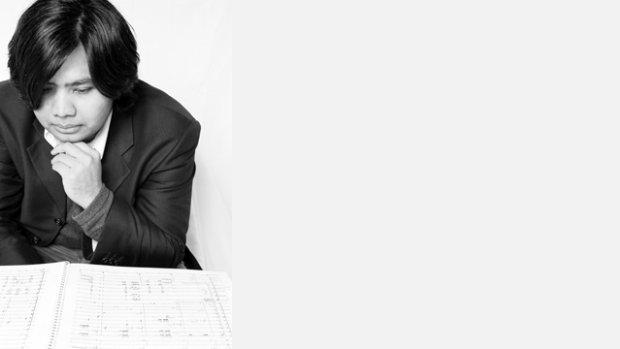 Tazul Izan Tajuddin was born in Malaysia and currently lives in London. Tazul has studied music in Malaysia, USA and Europe and received a PhD in Composition from University of Sussex in 2002. He has studied with Leonardo Balada, Franco Donatoni (in Spain), Martin Butler, Jonathan Harvey, Michael Finnissy and has had consultations with Brian Ferneyhough (at IRCAM, Paris) and Iannis Xenakis and received encouragement from Henri Dutilleux.

He has won 1st prizes in the Toru Takemitsu Composition Award 2002, the 8th Tokyo International Competition for Chamber Music Composition 2003, the 2nd Molinari Quartet Composition Competition 2004, the 21st JSCM Award for Composers 2004, the Lutoslawski Composition Award 2005 and the New Millennium Composition Commission Award UK 2005. He has also been in the final of numerous other international composition competitions. He has received awards from the Malaysian Ministry of Culture initiated by the Prime Minister. In 2003 his work was selected by the Asian Music Festival. In 2006, ISCM Britain selected his work for the ISCM-World Music Festival 2007 which will be performed in Hong Kong.

Tazul has been selected three times as an spnm shortlisted composer. His works have been performed and broadcast in Asia, Europe, Australasia and North America.