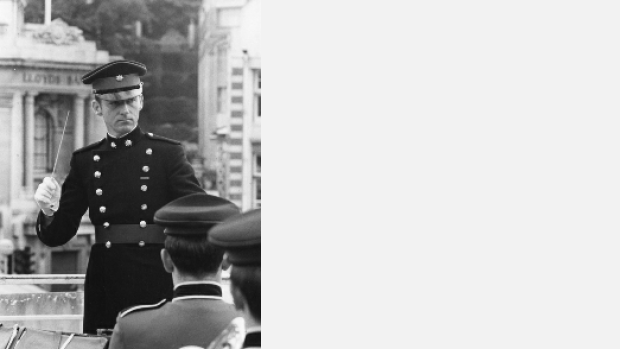 Stephen began his musical life as a horn player at Gordon's School, Surrey, England in 1961. He attended The Royal Military School of Music (RMSM), Kneller Hall on the Pupil's course 1967/68. He was then appointed principal horn of the 2nd Bn The royal Anglian Regiment and performed with them around the world. In 1975 he was selected to attend the Student Bandmaster's course at RMSM after which, in 1978, he was appointed Bandmaster of the 1st Bn The Royal Anglian Regiment.

In his competition year at RMSM he composed his first piece, Gordon's March, which was later renamed Die Soldaten von Celle, and recorded by MusicMasters on an LP record entitled The Vikings (which is the nickname of the 1st Bn The Royal Anglian Regiment).

Due to severe cuts to the UK's defence budget which negatively affected the constitution of British military bands Stephen left the Army in 1984 and subsequently qualified as a psychologist.

In 2001 he took up a career as a full time composer and has written and published many pieces since that time. Stephen has an eclectic approach to music and composes for all forms of ensemble from full symphony orchestra (with or without choir), to smaller units of strings, woodwind, keyboard and brass (for which he writes mostly for the horn). In the main his style is contemporary classical although he has composed rather more avant garde pieces such as, for instance, Thema Obscurante for symphony orchestra.

Stephen has published more than eighty works most of which may be found on https://www.scoreexchange.com/profiles/Stephen-Lines

Attached is a composition entitled Wessobrunn Creation Prayer (Wessobrunner Gebet) for organ and voices (SATB) - this was composed for a competition and is an example of Stephen's style of writing. The recording is rendered via Sibelius and NotePerformer software - the listener may need to use their imagination to overcome the limitations of this electronic method of presentation.