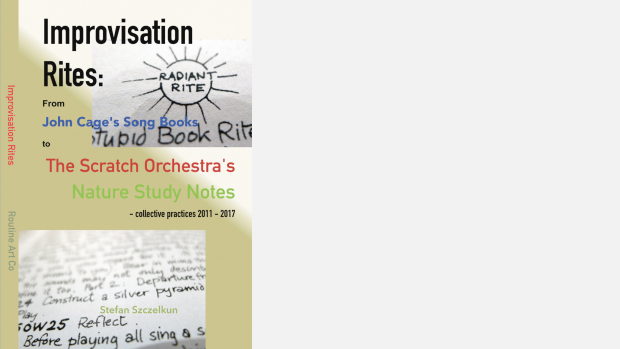 I am only a composer with respect to my early and recent work with the Scratch Orchestra and with my Agit Disco project.

In the spring of 2017 I was invited to Documenta 14 in Athens with Carole Finer, to lead a ensemble performance based on the 'Nature Study Notes' improvisation rites. At D14 there was also a vitrine display of my archive material from MayDay Rooms, including at set of photographs of my The Scratch Cottage, that was built and exhibited at Art Spectrum in 1971 and some of my early attempts to write rites.

A book of the whole experience of working with these improvisation rites was published in January 2018 - 'Improvisation Rites - from John Cages’ Song Books to the Scratch Orchestra’s Nature Study Notes: collective practices 2011 - 2017'. ISBN 9781-870736-96-1 Paperback colour. This includes new rites by myself and others.

Cornelius Cardew's democratic approach to (anti)composition influenced my subsequent approach to art and music. I see music /sound as part of a sensory whole.

My work is a sensible response to situations that I am in. This led me to continue to work in open artists collectives after being in the Scratch Orchestra, and to produce books. I have been wary of commissioned work unless in response to specific spaces, situations and communities. The media I used has mainly been writing, photography or video but has also included curation, performance and activism. I have tended to reject establishment modes to embrace more fluid collective situations.

Born in London post WW2 of displaced working class parents I grew up in the suburb of Shepperton. I studied architecture at Portsmouth before joining the Scratch Orchestra. I had some success as an author in the UK and USA with three books on our basic life supports: Survival Scrapbooks: Shelter, Food and Energy. Whilst at college I ran the Portsmouth Arts Workshop after being inspired by the Drury Lane Arts Lab and came in contact with leading experimental artists of the day, including Cornelius Cardew and The Scratch Orchestra, which I joined. I then researched the elements of human ability whilst working with New Dance Collective and wrote for their magazine. Much later this work was published as Sense - Think - Act.

During the Eighties I became a more conventional artist moving from Mail art to drawing, printmaking and performance art. I was a founder member of the Brixton Artists Collective and gallery which was active from 1983 -1987. I was a member of the rock band quartet Don Key Work. Towards the end of the Eighties my work took a literary and theoretical turn in relation to identity politics. This resulted in three books on class and art published under the collective Working Press imprint and a series of made-to-measure exhibitions with my 'Bigos: artists of Polish Origin' group that were supported by the Arts Council and is now archived with the Tate.

At the beginning of the Nineties I had the chance to build my own house in Kennington, London, as part of a self-build co-op. Audio from this experience led to a published sound piece called 'Self-Build'. I took an MA in Time-based Media to train in digital media skills. This was followed by a doctorate at the RCA 1997 - 2002 in which I evaluated my experience of artists collectives with a participant study of Exploding Cinema. At the same time I produced a series of video DVDs on culture and democracy, publishing them post 2002. I also made experimental music video working with musicians. These are available online. I got a job teaching on the MA Visual Culture at Westminster University and joined the Mute Magazine editorial team. This led to a variety of articles and blogs including the collaborative Agit Disco project, an exploration of the political effects of music in peoples lives. This was published as a book by Mute in 2012. It is the Agit Disco project and its subsequent 'Dispersal Mode' in which I focus on creating spaces for people to talk about their responses to music played on vinyl that signalled my return to the whole-hearted incorporation of music into my visual art/performance concerns.

Since my doctoral research I have been activating the archives of my past collective activities - most recently The Scratch Orchestra. These have now been acquired by major public archives including: BFI Special Collections, National Art Library at the V&A, Tate Archive, University of the Creative Arts in Farnham and the Museum of London. I continue to make video, photographic and performance works incorporating music, as you can see below.

I currently live on the outskirts of South London and am married with a daughter.

Glamour Lied to Me a text that started as a collaboration with Ed Baxter in 'Collaborations' was digested in 'Class Myths' and then republished in Polish by Wschodnia Galery in Lodz 1991 as part of an exhibition.

HEAD: An experiemntal video of a macabre rotating mask with early computer generated soundtrack by Jason Skeet aka Aphasic c1995.

London counterculture and people power of the Nineties Three DVDs 1997 - 2008 - Following my doctoral theme of culture and democracy I shot a series of videos of significant public demonstrations like J18 and other events with a view to documenting their visual culture. Three DVDs of these videos were published with help from University of Westminster. My video footage of Exploding Cinema and Kennington Park has yet to be published.

My Life in T-Shirts: Video and slides. Made with help from LabCulture and with a soundtrack by Simon Poulter.

Sense, Think, Act: 200 exercises to describe human ability Published as a Mediawiki in 2004 - 6. Recently redesigned as an ebook and paperback.

Video pedagogy Research into use of video in higher education 2006 - 2011. Funded by University of Westminster. Two papers published.

Agit Disco 2008 - 2015 A collection of 23 annotated playlists through which a variety of people consider the political effects of music in their lives. Each selection existing as a hardcopy CD as well as on a website. Published by Mute books in 2012 with an audio mirror on YouTube. Several excellent reviews. Also includes an ongoing Agit Disco Plus blog by me. Current form is a solo performance with 45rpm vinyl records - Site Gallery, Sheffield and Turnstyle Records, Streatham Festival 2015. Japanese expanded edition published in January 2018.

‘Chalet Fields of the Gower’: I recently photo-documented several of the chalet fields of Gower. I then interviewed a local architect Owen Short, and used this as an introduction to a selection of the photos in a book: ISBN 9781-870736-11-4 (This is a long-term theme. I took my first slides of plotland houses in 1971 when touring hte NE with the Scratch Orchestra.)

Home Movies A project to make very short movies about peoples sense of their own homes with reference to the ‘home movie’ genre. Two made so far. Sofa and PaciFarr.

‘Silk Roots’ A short video about my realisation of the meaning of my mother's and grandmother's silk embroidery. These 'ordinary' working class cultural practices are shown to be deeply imbued with the wider forces of history in a way that came into our family by touch rather than by reading books.

BASE 1968 - As a student of architecture I organised a large scale experimental architecture event in Portsmouth, as part of Buckminster Fuller's World Design Science Decade. With inflatables, performance artists etc.

Scratch Orchestra 1969 /70 - Recently documented as part of John Tilbury's major work 'Cornelius Cardew: a life unfinished'.(2008) This experience continues to inform my practice. I was part of a performance sub-group called 'Slippery Merchants'.

Brixton Artists Collective and Gallery 1983 /1986 - General leadership including anti-racism policy development. Organised three experimental shows: ROADWORKS: ten artists work in the street for ten days documenting their activity back in the gallery' (including Mona Hatoum, Rasheed Araeen and Carlyle Reedy), Art of ImMEDIAcy with Ian Sherman, and the first show by Bigos, my Polish artists group. Activation of the BAG archive in 2012 was supported by ACE and Lottery Heritage based at 198 Contemporary Arts and Learning. In Tate archive collection.

Performance collaborations - with Mona Hatoum 1985 /1988 (Chisenhale and Brixton). Performance art with Catherine Yass and the late Ian Hinchliffe and others at Zap Club, Plagiarism Festival and Chisenhale. Emigration Ritual in Hull with local residents.

Bigos: artists of Polish origin 1986 /1993 - Formed and led this open group to explore what art can contribute to the discourse on immigrant identity and cultural assimilation. Shows across UK and in Poland. Art Council grant for 'Made to Measure' UK touring show. Archive materials recently acquired by the Tate.

'Working Press: books by and about working class artists' 1986 /1996 - Group project and imprint to explore peoples thinking about the idea of working class artists and to support working class artists to self-publish their thinking. 18 publications by authors that included Graham Harwood and Mathew Fuller. Archived with contextual publication collection in 2013 by University of the Creative Arts (BookRoom, Farnham). Activated with a creative residency in May 2016. RISE book documents the archive and its activation available as a free ebook.

‘Nature Study Notes’ 2013 -2015 - A continuation of the group above to explore and perform a collection of text scores that played a core role in the early Scratch Orchestra in 1969. A performance at Chisenhale Dance Space June 2014 and Cafe Oto early in 2015. Archived after a closing discussion at Mayday Rooms. Performed at Documenta 14 in 2017.

‘Housework was her life’: A set of slides of my mum at work projected onto her embroidered table cloths.

HOUSEWORK: Documentations of art actions in Eighties based on a plywood house on wheels that I pulled through different cities. Includes video graded from S8 film. There is an unshown section made with Catherine Yass in a gallery in East London.

Kennington Park: A phone-photo diary of 2006, videos of key events, paper archive, 1997 pamphlet, A meditation on the middle class mediation of public space. A possible installation.

Three performances for photograph: Photographers were Edward Woodman and Patrick Gilbert. Published as postcards and distributed as part of International Postal Art Network and in other ways.

All Objects - an archeology of the popular subconscious: a video made for the Freud Museum and shown in the Polish Cultural Institute, London, 1998. This work alludes back to a long-term interest in 'All Objects' and the 1001 activities with the Scratch Orchestra.

Numbers 1 - 100 The semiotics of numbers. A countdown. 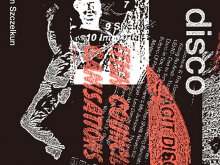