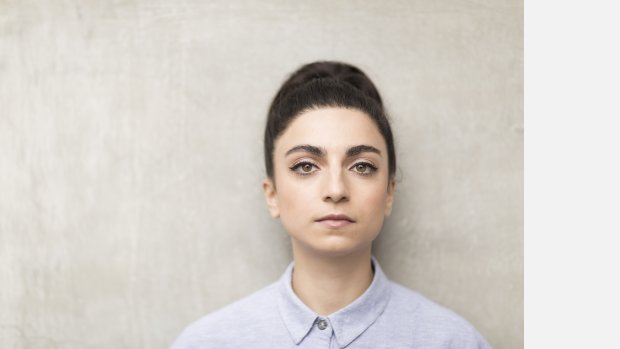 Shiva Feshareki is an experimental composer and turntablist of British Iranian heritage.  Her work explores the sound of electricity in a classical music context through a wide range of practices and collaborative processes.  She was awarded the 2017 Award for Innovation at the British Composer Awards for her groundbreaking approaches.

Her turntable performances slice apart disparate sonic palettes before sewing them back together with expert sampling techniques.  Cuts from old-school garage and d’n’b records electrify her sets, while deep minimalist composers such as Pauline Oliveros and James Tenney provide a layer of delicacy and complexity that has been responsible for transforming Shiva’s wider approach to music.  In 2017, Shiva performed with her turntables at Montreal’s Mutek festival and at London’s Tate Modern gallery as part of a series curated by NTS Radio, the station on which she hosts her monthly show ‘New Forms’.

Turntabling is also a signature element of her compositional work, which explores the physicality of sound in relation to light and movement.  In ‘GABA-analogue’ (2017), Shiva employed space as a compositional tool to create a surround-sound orchestra inside London’s Printworks nightclub.  Denmark’s Aarhus Symphony Orchestra brought to life another spatialised composition, ‘O’ (2017), for acoustic orchestra, organ and her 78 RPM Stanton turntables.  In 2016 she also collaborated with James Bulley and the London Contemporary Orchestra to realise ‘Still Point’, a lost composition by the pioneering 20th Century composer Daphne Oram.

Artist Haroon Mirza, organist Kit Downes and electronic producer Lee Gamble are among Shiva’s most recent collaborators.  Lee Gamble worked with Shiva in her first role as a curator, which saw her fulfil her dream of hearing music from her favourite composer, Eliane Radigue, deep inside a cave.  The event premiered a new composition by Eliane and also saw Lee accept Shiva’s challenge of creating his first ever acoustic composition, mirroring Radigue’s shift from electronic to acoustic composition.

Shiva continues to work on site-specific compositions, while refining her live remixing skills and love of improvisation through performance.  Future projects include a residency at the Zabludowicz Collection as part of Haroon Mirza’s installation ‘For A Partnership Society’, where Shiva will activate the space with a live improvisation on turntables modified with Haroon’s bespoke hardware.