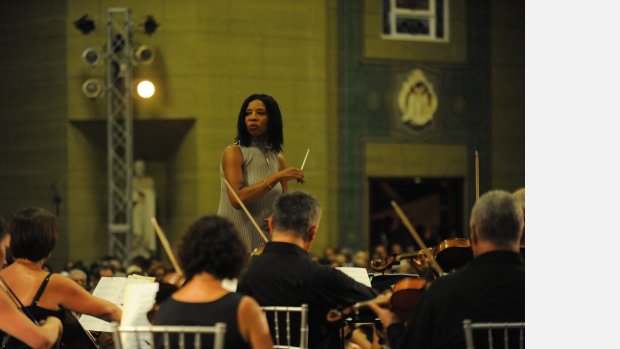 The music of visionary composer Shirley J. Thompson is performed and screened worldwide and often described as “beautiful and powerful” (Le Figaro).

A visionary artist and cultural activist, Thompson has pushed the boundaries of classical music forms and recognized for bringing more audiences to the genre with an OBE in 2019 for Services to Music. She is the first woman in Europe to have composed and conducted a symphony within the last 40 years. New Nation Rising, A 21st Century Symphony performed and recorded by the Royal Philharmonic Orchestra is an epic musical story celebrating London’s thousand-year history, and one in which the RPO is accompanied by two choirs, solo singers, a rapper and dhol drummers, a total of nearly 200 performers. This extraordinary work was originally commissioned to celebrate Her Majesty the Queen’s Golden Jubilee in 2002 and the concept was latterly assumed as a framework for the 2012 Olympics Opening Ceremony. She has also composed extensively for TV/film, theatre, dance and opera production, always driven by the belief in the transformative power of music to affect social, cultural and political change an approach that has been unique in the genre.

Thompson’s musical experience began with her playing the violin for various youth symphony orchestras in London, as well as choral singing with local choirs in Newham. After studying Musicology at the University of Liverpool and then specialising in Composition at Goldsmiths’ College, her first major commission came from the Greenwich International Festival, when she composed a chamber orchestral work entitled Visions (visions of self-determination for Caribbean nations) performed by the Greenwich Ensemble.

After writing several instrumental and vocal ensemble pieces, Thompson started writing for film and television. She is considered to be the first woman to compose and musically direct music in the BBC Lime Grove Studios. Her music for the major BBC drama series, South of the Border was selected as a Top 20 BBC TV Theme and her score for the film, Dreaming Rivers, earned a prize at the Mannheim Film Festival in that year. She subsequently composed music for a number of television documentaries and drama programmes.

In 1994 she launched and directed The Shirley Thompson Ensemble at London’s South Bank Centre, her own ensemble of instrumental soloists, singers, dancers, visual artists and poets. It was with this group that she created ground-breaking compositions which seamlessly integrated contemporary classical music orchestration with improvisation, pop, world music, dance and the spoken word. With her love of reggae, dub, soul, township and afro-beat, her concerts featured her arrangements of music by popular artists such as Bob Marley, Bunny Wailer, Marvin Gaye, Nina Simone, Fela Kuti and many more.

She also developed compositions that integrated video imagery and contemporary dance for the concert stage subsequently becoming a leading exponent of inter-disciplinary music composition and performance. Thompson also works extensively with multi-media, devising innovative arts education programmes. The exemplary, Newham Symphony Schools Spectacular for children ranging in ages from 7-17 years is one such scheme. The latter programme, devised in 2002, led to the introduction of the national education scheme, Every Child A Musician, being adopted in the London borough in 2010.

Music by Shirley J. Thompson has been commissioned for several royal engagements, including Commonwealth Day, performing for HM Queen Elizabeth II at Westminster Abbey in 1999, with her ensemble again for HM Queen Elizabeth’s summer party at Buckingham Palace in 2001, and opening the newly built Stratford Cultural Quarter with the London Gala Orchestra performing the Newham Symphony with Prince Edward and Countess Sophie of Wessex in attendance. In 2000 she was commissioned to compose a large-scale work to commemorate the Queen’s Golden Jubilee in 2002.

Music for the theatrical stage includes her score for the play, The Lodger (Theatre Royal, Stratford East) and A Child of the Jago, an opera in two acts presented by the South Bank Centre with sponsorship from the Arts Council. A Child of the Jago earned her a nomination for the Woman of the Year award in recognition of her contribution to the Arts in 1997.

20-YEAR ANNIVERSARY OF OPERA PERFORMANCES IN THE WESTEND

Since her 2-Act opera, A Child of the Jago, Thompson has composed a number of music theatre works. The Woman Who Refused to Dance (2007) was specially commissioned for the opening of the Parliamentary exhibition, British Slave Trade: Abolition, Parliament and People. Spirit Songs (2007) an orchestral song-trilogy was performed by the Philharmonia Orchestra in the Queen Elizabeth Hall, Southbank Centre and to commemorate 100 days of Barack Obama’s presidency, Thompson was commissioned by South Bank Centre to compose Voice of Change (2009). The BBC Concert Orchestra Principals and vocal soloists performed this work.

In February 2012 Thompson’s Mandela Tales, was premiered in the Purcell Room at the Queen Elizabeth Hall. The work features a number of stories from a variety of regions and traditions across Africa with storytelling, original live music, video projection and dance. Shirley J. Thompson had a successful South African premiere of Mandela Tales, performed by the Gordonstoun School in Cape Town, for the GREAT British Week of Culture in February 2013.

In January 2014, Shirley J. Thompson conducted the premiere of her new choral commission, Westminster Anthem at Westminster Abbey, to commemorate 175 years of the University of Westminster. Performers included the Westminster Abbey Organist, Daniel Cock, Westminster Chorus and Westminster Brass. In February she was Composer-in-Residence, for the Lynn Conservatory, New Music Festival in Florida where the Lynn Philharmonia gave a number of orchestral performances of her works. She returned to present a showcase performance of Heroines of Opera, a new chamber opera trilogy begun in 2006 with the Spirit Songs orchestral trilogy for solo voice and chamber orchestra, at the Women of the World Festival 2014, staged at the South Bank Centre. The AACO performed her works in Los Angeles at MOMA for IWD as well as the Latin American Museum.

Thompson has been developing a series of chamber operas for solo voice, speaker and orchestra that feature iconic women in history that have been mostly overlooked in mainstream historical narratives, entitled Heroines of Opera. This innovative project flies in the face of the operatic convention where women are most often drawn as the femme fatale. As well as developing previously submerged narratives into stage performances, she has created lecture/performances, presenting them at a variety of universities and venues such as the South Bank Centre, the Maritime Museum and the Victoria and Albert Museums.

She is currently working with the Minerva Scientifica/Franklin Effect project (since 2015) with the Electric Voice Theatre and Judith Weir, Master of the Queen’s Music as mentor. Here four women composers and four women scientists collaborate to produce musical artworks that integrate scientific research, composition and performance. The resulting pieces have been performed at venues including the Science Museum, the Anatomy Museum, Tete a Tete: The Opera Festival, and the Edinburgh Fringe Festival. A CD of the works, The Franklin Effect, is now available on First Hand records and has garnered significant media attention.

Concurrently, Thompson created the work, Sun Beam (Ilanga) as a result of her residency at Rambert with the Fidelio Trio and dancer/choreographer, Dane Hurst, in January 2015.  The opera Sacred Mountain: Incidents in the Life of Queen Nanny of the Maroons was premiered at Tete a Tete: The Opera Festival in that same year.

Work on the Scientifica Project continued through 2016 with a number of significant performances. The Oltenia Philharmonic gave the Romanian premiere of her symphony, New Nation Rising in the Craiova Contemporary Music Festival under the baton of maestro Alexandru Iosub. She also received a number of accolades including the UWI Luminary Award, the University of Westminster Chancellor’s Award, and made No.8 on the Thomson/Reuter Powerlist.

Shirley J. Thompson PhD is Reader and Head of Composition and Performance at the University of Westminster. She has served for over 20 years on several national arts institutions, including the London Arts Board, the Arts Council of Great Britain and the Newham Council Cultural Forum. She was the first female executive of the Association of Professional Composers and now serves as an elected member of the Classical Music Executive for the British Academy of Song Writers, Composers and Authors. She has been named in the Evening Standard’s ‘Power List of Britain’s Top 100 Most Influential African and African Caribbean People from 2010 to 2019 and frequently in the TOP TEN.

Notable commissions in 2018 include Shirley J. Thompson’s anthem for Windrush Day on 22 June. For this she composed, Psalm to Windrush for the Brave and Ingenious for SATB solo singers or choir. The work was performed at Westminster Abbey with the UK Prime Minister and leading officials present. Her new opera, Women of the Windrush Tell Their Stories was performed to wide acclaim at King’s Place by leading soloists, including acclaimed soprano, Nadine Benjamin.

VARIETY SHOW AWARDS 2018, Finalist for the Creative Industries Award for outstanding influence in the industry

OBE for Services to Music, January 2019 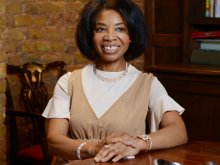