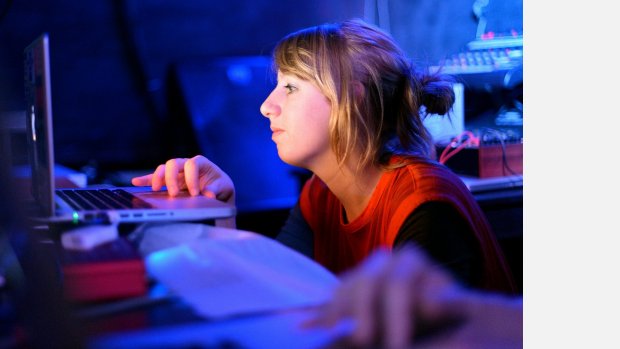 Shelly Knotts is a Newcastle, UK, based composer, performer and improvisor of live electronic, live-coded and network music. Her experimental and collaborative tendencies have seen her engage with diverse musical practices and styles ranging from electroacoustic tape music to live-coded dance music.

She is currently studying for a PhD in Live Computer Music at Durham University with Nick Collins and Peter Manning and completed a masters degree in composition at the University of Birmingham in 2012, where she studied with Scott Wilson and Vic Hoyland.

Current projects include: the network music band BiLE (Birmingham Laptop Ensemble), who have been performing together in various line-ups since 2011 and are interested in collaborative electronic music performance and composition and structures for improvisation. They have performed across the UK and Europe including at: NIME 2011 (Oslo, NO), Laptops Meet Musicians Festival 2011 (Venice, IT) and TEDxBrum (Birmingham, UK); and generative audio-visual performance [Sisesta Pelakiri] with Alo Allik based on an audio-visual feedback loop created by writing code live on stage and exchanging musical information over the network. [Sisesta Pelakiri] has been performed at live.code.festival 2013 (Karlsruhe, DE) and Zeppellin 2013 (Barcelona, ESP).

As a live-coder she has also performed at Algoraves - which present live algorithmic music for dancing to - in Brighton, Düsseldorf, Cologne, London, Sheffield, Barcelona and Amsterdam.

She has taken part in several online festivals and broadcast performances both as a solo performer and as part of G.I.A.S.O (Great international Audio Streaming Orchestra), including Piksel 2013 (Bergen, NO) and Audioblast 2014 (Nantes and Anger, FR).

Publications of her work include: electronic works Etude #16, 257, on Chordpunch record label’s RissEP, 2012, and I.E.M (Impromptu Entropy Machine), on Absence of Wax netlabel, 2013, live electronic piece XYZ in CNCPTN webzine in 2012, and mixed live electronic and instrumental piece Chordophonia in Leonardo Music Journal, 2008. She received a commission from the PRSF ‘women make music’ fund in 2011 for the project ‘interleave’ which combined the traditional Jazz Quartet with experimental live electronics.

She took part in a Composer Lab at METAL, Liverpool in 2013 and in 2014 she is taking part in the Sound and Music ‘Improvisors’ Residency with Steve Beresford at Wooda Farm in Cornwall. 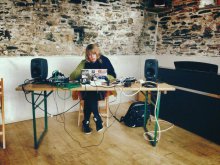