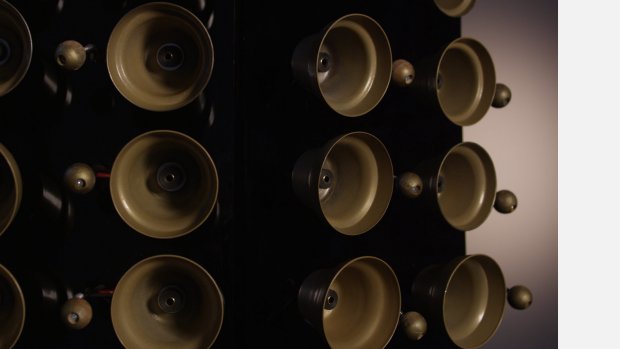 Sarah Angliss is a composer, performer and maker of robotic musical instruments. Creating works for her own stage performance and for film and theatre, she's known for her narratively rich electronic soundscapes which blur the boundaries between sound design and composition. Sarah's musical work reflects her lifelong fascination with European folklore and long-forgotten machines.  On stage, she's known for her singularly embodied performance which mixes theremin and ancient instruments with live electronics with the ensemble of musical automata she’s designed and built to work alongside her.

Sarah’s background is as unusual as her music. Trained from an early age as a classical musician, Sarah opted to study electroacoustics rather than music at university. Some years later, she followed this up with a masters in robotics so she could build the music machines she imagined. She also continued composing and performing, taking time out to study for a diploma in early music performance.

In 2012, Sarah was a commissioned by the National Theatre and Headlong Theatre Company to compose a terse, electronic score for Lucy Prebble’s new play The Effect. Her music made extensive use of her original generative techniques—and in keeping with the theme of the play, most of the score was composed from sounds she’d collected from a London MRI suite. In 2013, she was commissioned to compose and perform music for silent film as part of the BFI season Gothic – The Dark Heart of Film (a project co-funded by PRSF). This was followed by original music and foley for a live reimagining of the John Wyndham classic The Midwich Cuckoos (2014)—funded by the BFI, Cinecity and Screen Archive South East. In 2015, Sarah was taken on as both composer and sound designer for a new production of Eugene O’Neill’s expressionist play The Hairy Ape (directed by Richard Jones for The Old Vic Theatre, London). Sarah has also been commissioned by several record companies (including British experimental labels Ghostbox and Gecophonic) and BBC   radio.

Sarah is also a prolific live performer. Stage performances of her own works have been seen and heard in the Southbank Centre (Royal Festival Hall Blue Room and Purcell Room), Cafe Oto, Supersonic Festival, Kunstnernes Hus (Oslo), Elektriteater (Tartu), The Arnolfini, Handel House, Vivid, Supernormal, BAFTA, Monomania, The De La Warr Pavilion, Spike Island, The Green Man Festival and many other festivals and venues, on BBC national radio and in the reverberation chambers of the National Physical Laboratory.

Sarah also occasionally works as a sound designer in historic sites. In 2014, she worked closely with veteran submariners to reanimate HMS Alliance, the UK’s last-surviving WWII-era submarine, with a generative, 50-channel soundpiece. In 2009, she designed and deployed a disturbing tactile infrasonic effect in It Felt Like a Kiss (a theatre piece by Punchdrunk and Adam Curtis for Manchester International Festival). She’s also deployed pure infrasound during performances in The Purcell Room.

Sarah's research into the history of sound and music has been published by the Science Museum, Smithsonian Scholarly Press and The Wire Magazine online and been featured in Off the Page, Prima Vista (Estonia), TEDx, dConstruct, Port Eliot and many other festivals. Sarah's currently on a part-time residency at the Pervasive Media Studio, Bristol where she’s exploring poetic robotics for musical performance (funded by The Heritage Lottery through Arts Council England). She’s also recently been enjoying a year as Visiting Research Fellow at SPRU Goldsmiths, London.