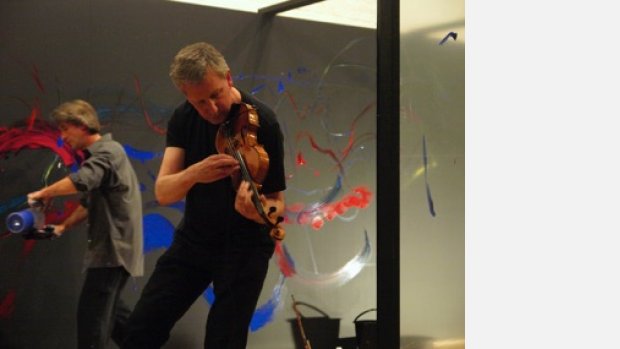 Roger Redgate is a composer, conductor and improviser.

He graduated at the Royal College of Music, where he won prizes for composition, violin performance, harmony and counterpoint, studying composition with Edwin Roxburgh and electronic music with Lawrence Casserley. A DAAD scholarship enabled him to study with Brian Ferneyhough and Klaus Huber in Freiburg. From 1989 to 1992 he was Northern Arts Composer Fellow, he has lectured at Durham and Newcastle Universities. He was invited as guest composer and conductor at the Darmstädter Ferienkurse für Neue Musik in 1984, 1986, 1988, 1990, 1992 and 1994 where he received the Kranichsteiner Musikpreis for composition.

He is conductor and artistic director of Ensemble Exposé, with whom he has performed at many European festivals and on BBC Radio 3 and recently released a CD of music by Brian Ferneyhough.

He has worked in the fields of jazz, improvised music, film and television (including programmes for the BBC and Channel 4), and performance art. His compositions have been performed extensively throughout Europe, Australia and the USA and he has received commissions from the BBC, the French Ministry of Culture, the Darmstädter Ferienkurse für Neue Musik, The Huddersfield Festival, the Venice Biennale and Ensemble 21 New York.

He has published articles on music and culture, the music of Brian Ferneyhough and Michael Finnissy, including a chapter in the book Uncommon Ground: The Music of Michael Finnissy. He is professor of Composition at Goldsmiths, University of London.